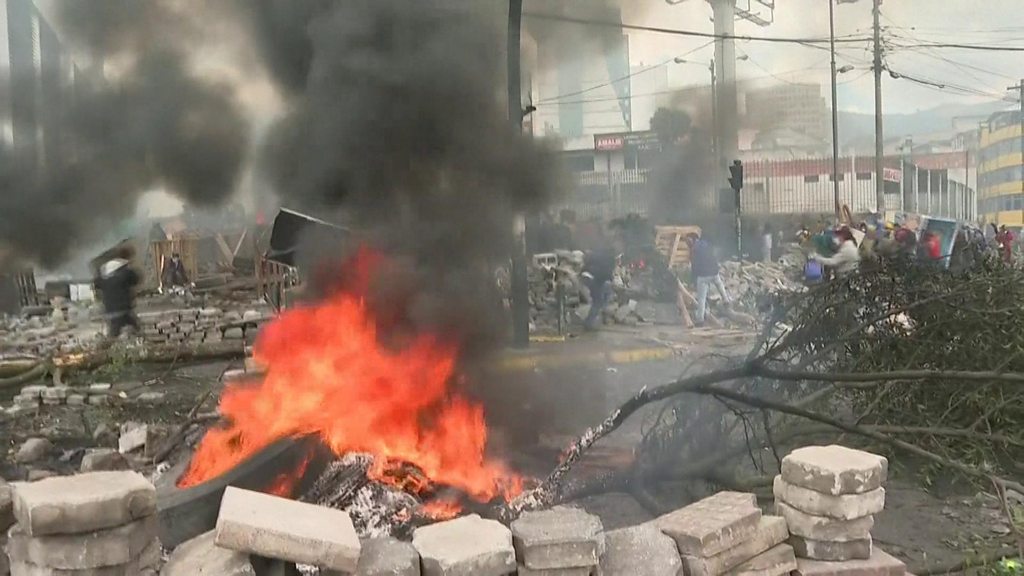 Ecuador’s president has ordered the capital, Quito, and surrounding areas to be placed under curfew in a bid to curb violent protests.

“We’re going to restore order in all of Ecuador,” Lenín Moreno vowed in a televised address.

Parts of Quito have descended into chaos after more than a week of clashes between demonstrators and riot police.

Mr Moreno said the protesters, who are led by indigenous groups, had agreed to direct talks for the first time.

They are demanding the return of fuel subsidies, scrapped by the government as part of a package of austerity measures. Some have called for the resignation of the president, who has declared a two-month national emergency.

“I’ve ordered the joint command of the armed forces to immediately take steps necessary to re-establish order in all of Ecuador,” he said.

Mr Moreno also thanked indigenous leaders for agreeing to hold direct talks. Members of the the indigenous umbrella group CONAIE had previously rejected calls for the talks but agreed on the condition that be broadcast and not held behind closed doors.

It is not clear if demonstrators will observe the curfew.

Earlier on Saturday, protesters attacked a television station and newspaper office in Quito. The Teleamazonas channel broadcast pictures of its broken windows and a burning vehicle. El Comercio newspaper tweeted that a “group of unknowns” had attacked its offices. No injuries were reported in either incident.

Elsewhere, masked men threw petrol bombs at a government building in Quito housing the comptroller general’s office and then overran it.

On Twitter, Interior Minister Maria Paula Romo said the area around the building was being evacuated so fire crews could put out the flames. She said 30 people had been arrested outside the building.

Protests began after the government announced an end to fuel subsidies as part of public spending cuts agreed with the International Monetary Fund (IMF) in return for a loan. The deal reached in March will allow Ecuador to borrow $4.2bn (£3.4bn).

Mr Moreno has said the fuel subsidies, introduced in the 1970s with an annual cost of $1.3bn, were no longer affordable. Eliminating them is part of his plan to shore up Ecuador’s flagging economy and ease its debt burden.

Petrol prices soared and thousands took to the streets. In recent days, they set up barricades, stormed buildings and clashed with security forces, who have tried to disperse the crowds with tear gas.

Protesters have also entered some oil fields, affecting production in the Andean nation, a member of the Organization of the Petroleum Exporting Countries.

Indigenous-led protests have toppled three presidents in the past few decades. Since the current unrest began, protesters have taken dozens of officers hostage in various locations throughout the country .