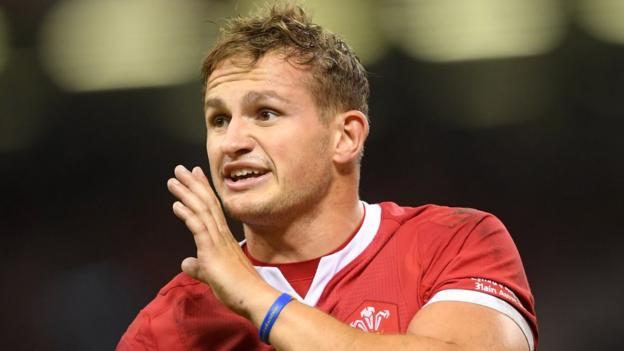 Wales wing Hallam Amos says he is ready to step in at fly-half during the final Rugby World Cup group game against Uruguay.

With Dan Biggar injured, Rhys Patchell is the only other recognised specialist 10 in the squad and starts in Kumamoto.

Amos is among the options to slot into fly-half if Patchell is replaced.

“Gats [Warren Gatland] has said we’ve got a few options there so I am happy to step in if need be,” said Amos.

This is despite Amos, who also plays full-back, having never played senior rugby at 10.

Gatland has said Amos, centre Hadleigh Parkes and the two replacement scrum-halves Tomos Williams and Gareth Davies are the candidates for Patchell’s cover.

“So it’s been a while. Hadleigh has played there too for the Scarlets. I played with Justin Tipuric for years, when he crossed to the Sevens he was one of the most talented players, so could do a job there as well.

“There are a few who can cover there. If it’s my name that is chucked into the ring I will feel comfortable being there.”

Warren Gatland revealed Wales have been training with Amos at 10 in the build-up to Uruguay.

“In the last couple of weeks I have been trying to emulate Bernard Foley for Australia and then Ben Volavola, the Fijian, so it’s been fun.

“It is exciting because you have your hands on the ball early and have a chance to scan. It’s a great place to play when teams are fatigued.

“As wings we are given licence to get in at first-receiver. It’s a number on your back in the backs, you become accustomed to playing across the park.

“As soon as the first phase is done you often find yourself at first-receiver.

“I am left-footed as well so I am often there for a kicking option. It comes naturally, but hopefully Patchy [Patchell] is ready for a full 80 minutes.”

Amos starts on the wing and is keen to impress as one of five players who had no part in the victories over Georgia, Australia and Fiji which put Wales into the quarter-finals.

Gatland’s side are on the verge of winning Pool D and setting up a quarter-final against France in Oita on Sunday, 20 October.

Locks Adam Beard and Bradley Davies, hooker Ryan Elias and scrum-half Aled Davies have also had to bide their time.

“Gats has spoken to us about how it’s an opportunity,” said Amos.

“You just need to get into the game, because there are seven or eight of us who have not played a lot.

“It’s Uruguay’s last game and like Fiji they will come out all guns blazing, so it will be a great occasion.”

Still only 25, medical student Amos has had his fair share of injuries to overcome with four shoulder operations, dislocated elbows and ankle injuries to his name.

It is also two years since his last Test start on the wing having featured at full-back in that time for Wales.

“I played all of last season on the wing for the Dragons,” said Amos.

“Full-back is my preferred position, but as with 10 you often find yourself in different positions.”