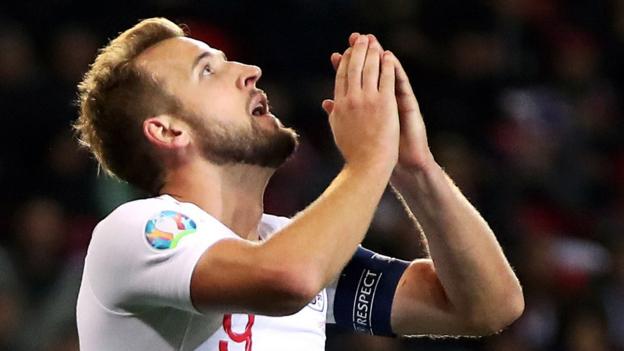 How to follow:
Listen on BBC Radio 5 live and BBC local radio; text commentary on the BBC Sport website

England’s defeat in the Czech Republic has forced them to re-evaluate and re-focus as they look to bounce back in Bulgaria, says skipper Harry Kane.

Gareth Southgate’s side could clinch qualification for the Euro 2020 finals if they win in Sofia and third-placed Kosovo fail to beat Montenegro.

“When you lose you reflect on everything, your own performance and the team’s,” Kane said.

“It definitely opens up your eyes a little bit more.”

England’s 2-1 defeat in the Czech Republic on Friday ended a 43-match unbeaten run in World Cup and European Championship qualifiers stretching back to October 2009.

Speaking to BBC Radio 5 Live, Tottenham striker Kane added: “Whenever you are winning you kind of just move on to the next game and maybe you don’t see the whole picture and what we can improve on.

“When you lose you start looking back at other games, or maybe that’s been happening for a few games now.

“It’s important to turn that into a positive and make sure we learn from that and take that into the Bulgaria match.”

Southgate echoed Kane’s words by saying his team “have to deliver” a positive reaction against a Bulgarian side which they beat 4-0 at Wembley last month.

“It’s an unusual feeling for this group of players because they haven’t had a really disappointing, unexpected disappointing result,” he told 5 Live.

“We have had disappointing results in some big matches against high-calibre opposition, but against the slightly lower ranked teams, that’s our first experience of that.

“I had a couple as a player when we travelled away and difficult games remind ourselves about playing away from home at any level, it is tough.”

Southgate says the possibility of returning to a system playing three centre backs in Sofia – which served England well during their run to the 2018 World Cup semi-finals – would not be sign his team has gone backwards.

“I think when you’re looking at your team you’re always assessing, especially given the availability of players for each get together. What’s the best way forward, what are the best tactics for this match, what might be the best tactics moving forward?” he added.

“I think we should always be reflecting upon what is the best system to get our best players on the pitch and in the areas of the pitch were they can be most effective. I think that’s been a strong point of what we have done over the last three years.

“Although we attempted something on Friday, because of the way we played, we would say it didn’t work, that doesn’t necessarily say it was the wrong decision, we just didn’t execute it.”

Southgate will make at least one change to this side that lost so disappointingly in Prague, with Leicester City left-back Ben Chilwell replacing suspended Spurs man Danny Rose.

On the opposite flank, Liverpool’s Trent Alexander-Arnold is a contender to replace Atletico Madrid’s Kieran Trippier at right-back.

Liverpool centre-half Joe Gomez is also putting pressure on Everton defender Michael Keane, who has struggled against Kosovo and also in Prague on Friday.

“We have to make one change with Danny being suspended and there was always likelihood we would make a couple more,” Southgate added. “We wanted to refresh the team with the tight turnaround.

“We have competition for places, we also need to look at certain players, but absolutely we have to react from the performance the other night.

‘England need a Plan B’ – Waddle

Southgate needs to develop a tactical Plan B and help some of his confidence-shorn players, according to former England winger Chris Waddle.

“When we are up against better teams, you have to find a way to beat them,” said Waddle, who is part of the Radio 5 Live’s commentary team in Sofia.

“If we want to kick on and win something, we’ve got to have that Plan B.

“We go out and play and he might tinker a little bit with the system but it’s not big changes. We haven’t got that ‘it’s not working, what do we do?’ It’s just change a player for a player, rather than thinking let’s go three at the back, or an extra man in midfield or two up front. We haven’t got that yet.

“When we are up against better teams, you have to find a way to beat them.

“It should be a system where you click your fingers and Plan B, Plan C. Gareth is still learning. He’s done a marvellous job. The next level for him – as much as the team – is having a system where he can see this is not working. If it means taking two off at half-time, so be it.”