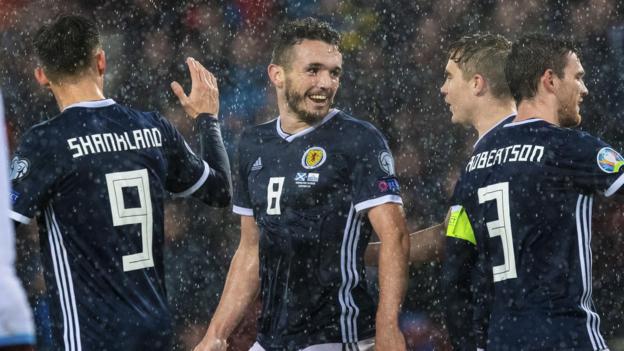 John McGinn will “treasure” his first career treble against San Marino after becoming the fifth Scotland player to score a hat-trick this century.

The Aston Villa midfielder scored three goals in the space of 34 first-half minutes to set Steve Clarke’s side on their way to a 6-0 Euro 2020 qualification win at Hampden.

It took the 24-year-old’s tally to four in 19 Scotland appearances.

“It’s right up there. I’m beaming,” he told BBC Scotland.

“Every time you play it’s a privilege but to score a hat trick is something I’ll treasure. I know people will say the opponent makes it void but not for me.”

McGinn was substituted after 69 minutes of the victory to a standing ovation and was voted man of the match by the BBC Sport Scotland audience.

The former St Mirren and Hibernian player admitted it had been “difficult” since the 4-0 defeat by Russia in Moscow on Thursday but that he will return south this time with “a smile on my face”.

“We’re human beings, we’re Scottish, we want to succeed – same as the fans,” he said. “We’re desperate to give everyone what they want and that’s the finals next summer.

“We’re all craving a tournament and maybe that’s what’s going against us – we want it too badly and performances are suffering.”

Scotland manager Steve Clarke: “He’s a goalscorer. He’s shown that in the English Premier League and if you can score goals at that level. you can score goals at any level. They’ve found a really good way of playing John as Aston Villa where he’s always up supporting the striker and getting on the end of second balls in or around the edge of the box.”

Former Scotland striker Billy Dodds: “It’ll be special. It doesn’t matter who you’re playing against. To get a hat-trick at international level tops it all. It’s good for John McGinn and good for Scotland.”