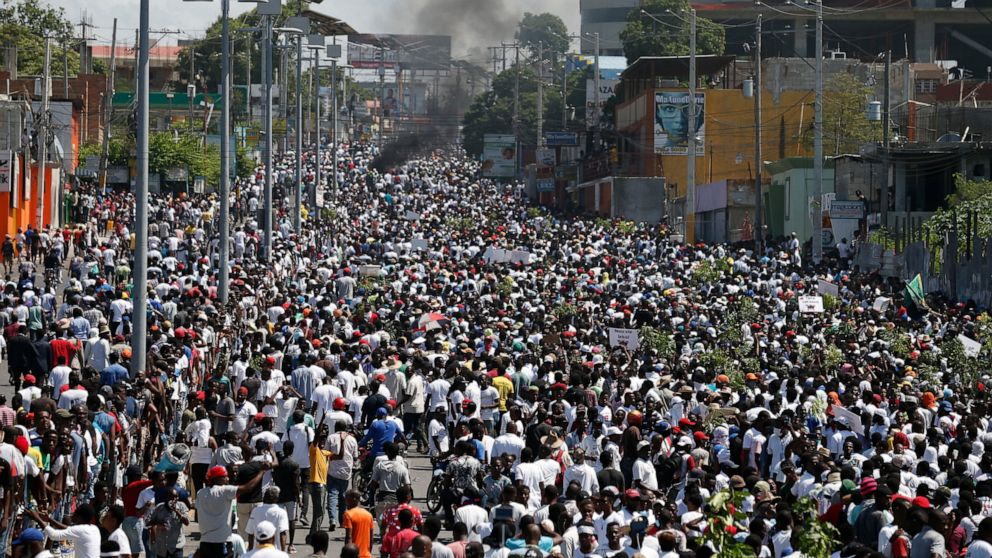 Thousands of Haitians joined a protest in the capital Sunday called by the art community to demand President Jovenel Moïse resign, increasing pressure on the embattled leader after nearly a month of marches that have shuttered schools and businesses.

Members of one art group participating in the march wore diapers on their heads and held empty bowls, while other protesters chanted slogans against Moïse, expressing anger over corruption, rising inflation and a lack of basic goods in the Western Hemisphere’s poorest country.

“Not our president” and “We want a different Haiti,” read signs in the protest in Port-au-Prince, where smoke could be seen rising from debris fires started by protesters.

In contrast to recent demonstrations, police did not intervene to stop the protesters and the march progressed without tear gas.

The demonstration comes amid a spike in violence in Haiti’s capital and surrounding communities as protests that have caused nearly 20 deaths and almost 200 injuries paralyze the country. Businesses remain shuttered and an estimated 2 million children have not been able to go to school, according to the United Nations.

Earlier in the month, Moïse announced the creation of a commission charged with finding a solution to end the worsening crisis, but opposition leaders have rejected his call for dialogue and unity, and are demanding his resignation.

Many are also calling for a more in-depth investigation following a report by Haiti’s Senate that accuses former top government officials from the administration of former president Michel Martelly of misusing at least $2 billion in funds tied to a Venezuelan subsidized oil program that were meant for social programs.

The report also names a company that Moïse once owned. Moïse, who was Martelly’s hand-picked successor, has denied the allegations.