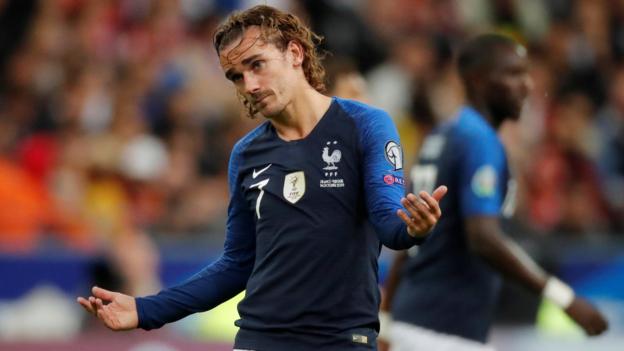 World champions France were held to a 1-1 draw by Turkey in Paris to delay their qualification for Euro 2020.

Kaan Ayhan pulled Turkey level five minutes later as he glanced a free-kick from the right past Steve Mandanda.

The result means Turkey remain above France at the top of Group H because of their 2-0 win in the reverse fixture.

Iceland’s 2-0 win over Andorra meant neither France nor Turkey could qualify on Monday.

France dominated the game, having 64% of possession and 23 shots but were unable to really threaten a well-organised and stubborn Turkey defence which has conceded just three goals in eight qualifying games.

Chelsea midfielder N’Golo Kante was on the bench for France despite reportedly picking up a muscle injury during the warm-up for Friday’s 1-0 win over Iceland.