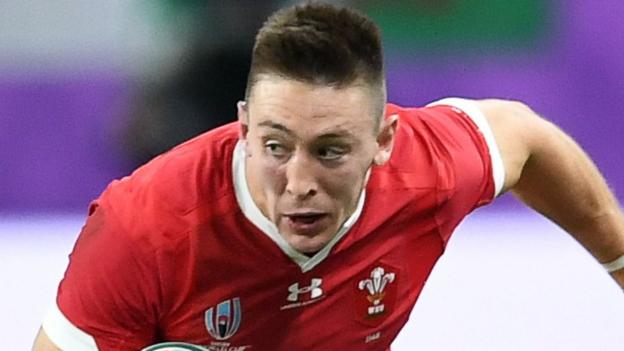 Adams is joint top scorer in the 2019 tournament with Japan wing Kotaro Matsushima.

“There are some legends there, it wouldn’t be bad to join that list, would it?” said Adams.

The 24-year-old’s first target will be to beat the Wales record of six set by Shane Williams at the 2007 tournament in France.

“Fingers crossed with three more games to go, hopefully I can pip him,” said Adams.

Ahead of the quarter-final against France in Oita on Sunday, Adams admitted he found it a surreal experience after making his Test debut only 18 months ago following an impressive season with former club Worcester.

“You could argue it’s the biggest week of my career so far with playing in a World Cup quarter final.

“I’d never have said I’d be standing here telling you that 18 months ago, but I’m over the moon to be here. Hopefully I can get out there next Sunday and do everybody proud.”

Adams and centre Hadleigh Parkes are the only players to start all four matches for Wales in Japan with Warren Gatland’s side defeating Georgia, Australia, Fiji and Uruguay to top Pool D.

“I came out of the game alright,” said Adams.

“It was sore, but it’s something you deal with and it didn’t stop me.

“I’ll just manage that this week with the seven days and hopefully I’ll be without the strapping next Sunday if selected.

“We have seven days now which is nice, especially after the four days we’ve just had. That was tough, especially backing up.”

However, Adams says playing two games in such a short space of time keeps him “rugby tough”.

He added: “When you take little knocks and you’ve had a period away they tend to linger a bit more.

“When you’re playing week in, week out you can seem to shrug them off a little bit quicker.

“That’s helped me. I’ve no problem with backing up with a four-day turnaround. I absolutely love playing and it’s always a special occasion playing for Wales.”

Adams was in the Wales side that beat France 24-19 in Paris in the Six Nations in February, after the visitors trailed 16-0 at half-time.

“France are renowned for being able to turn it on and when they do they’re extremely dangerous,” said Adams.

“They’ve got some quality players. At times in this competition they’ve looked really good. They definitely pose a threat to us.”

Wales captain Alun Wyn Jones has told the squad they are 240 minutes from glory which Adams says provides huge motivation.

“When you say it like that it does put it into perspective a little bit, doesn’t it?” said Adams.

“But we’ve got a tough 80 minutes next Sunday.

“There is no reason why this group of players can’t achieve something special.

“We’ve got belief in each other and in the squad and we’re all excited moving forwards now.

“This is where we wanted to get ourselves to. To be top of the pool gives us the best chance of making it all the way.”