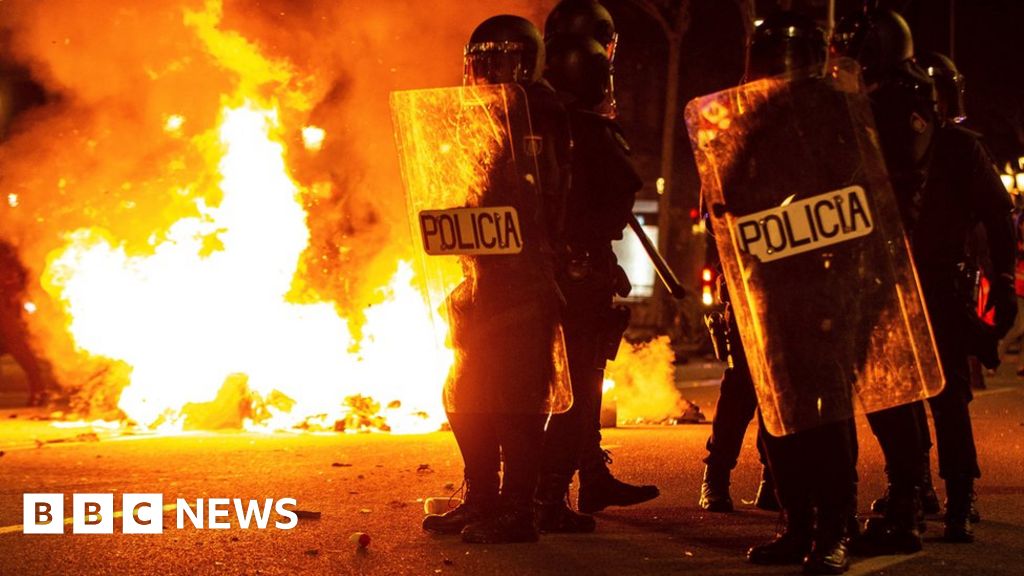 Thousands of pro-independence demonstrators have taken to the streets of Catalan cities for a second day, leading to clashes with riot police.

In Barcelona, fires were started and protesters attempted to storm government offices.

It follows the sentencing on Monday of nine Catalan separatist leaders.

Catalonia’s regional government said it sympathised with protesters’ anger. Spanish authorities are investigating who is organising the disruption.

Protesters have reportedly been using a website known as Tsunami Democratic, which directs them to protest sites in Catalan cities.

In Barcelona, riot police charged into a crowd of protesters who were trying to access government buildings.

There were three arrests and local media reported that nine people had been treated by medical services.

Protests were also reported in the cities of Girona and Tarragona.

Why are people protesting?

The protests began after nine Catalan independence leaders were handed jail sentences of between nine and 13 years on Monday.

The separatists were convicted of sedition over their role in an illegal independence referendum in 2017.

Another three were found guilty of disobedience and fined, but not jailed. All 12 defendants denied the charges.

Joan Tardà, the former deputy leader of a pro-Catalan independence party, has called for peaceful protests.

“There is nothing more lethal to independence than the combination between a violent minority action on the street and an uncontrolled police force,” he said on Twitter.

What is behind the Catalonia controversy?

Catalan nationalists have long complained that their region, which has a distinct history dating back almost 1,000 years, sends too much money to poorer parts of Spain, as taxes are controlled by Madrid.

The wealthy region is home to about 7.5 million people, with their own language, parliament, flag and anthem.

In September, a march in Barcelona in support of Catalonia’s independence from Spain drew crowds of about 600,000 people – one of the lowest turnouts in the eight-year history of the annual rally.