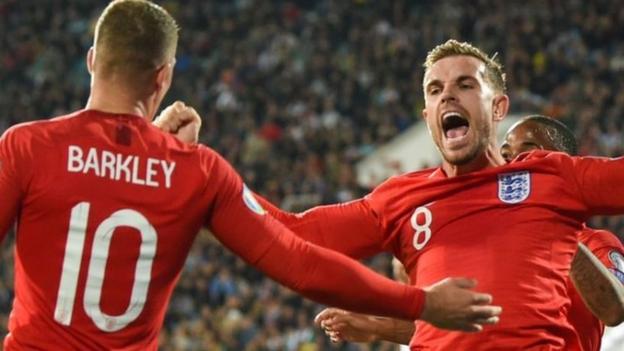 Monday’s Euro 2020 qualifier in Sofia was stopped twice as home fans were warned about racist behaviour including Nazi salutes and monkey chanting.

England were 3-0 up after the second stoppage in the 43rd minute and then scored three more times in a 6-0 win.

“It was disgusting,” Henderson, 29, said of the abuse his team-mates faced.

“It shouldn’t be happening and something needs to be done about it but I thought the lads were outstanding and if I was angry I’m sure they were angry as well.

“We let the football do the talking. The message in the dressing room at half-time was we wanted to go out in the second half and make them suffer and make their team suffer on the pitch and I think we did that.”

England defender Tyrone Mings, on his international debut, said the racist abuse started before the match began and was later shown to turn towards the linesman and ask: “Did you hear that?” after further chants in the first half.

With England 2-0 ahead following goals from Marcus Rashford and Ross Barkley, an announcement was made in the 28th minute warning home fans that any further incidents could result in the match being abandoned – in line with Uefa’s three-step anti-racism protocols.

Barkley added a third goal for Gareth Southgate’s side, before the match was stopped for a second time shortly before half-time.

Southgate, captain Harry Kane and several players gathered near the touchline before the interval after more audible abuse, and it looked as if the game would be abandoned.

While some questioned the decision of the visitors to play out the remainder of the qualifier, Henderson said the players had good reason to.

“I obviously wasn’t happy with the situation that we were in, it wasn’t nice to be involved in and it shouldn’t be happening in 2019, it is very disappointing,” he said.

“But, at the same time, I felt as a team we dealt with it so well, we touched on it before we came here just in case it did happen and unfortunately it did.

“We spoke together and the decision was that we carried on because if you leave the pitch and stop the game they win, really.”

Raheem Sterling, another player on the receiving end of racist abuse, scored twice with Kane adding a late sixth goal to put England one win away from qualifying for the finals of Euro 2020.

On Tuesday Uefa charged the Bulgarian Football Union with their fans’ racist behaviour, throwing of objects and disruption of a national anthem.

European football’s governing body’s president Aleksander Ceferin has urged the “football family” to “wage war on the racists”, while Fifa president Gianni Infantino called for “life bans from stadiums for those who are found guilty of racist behaviour at a football match”.

The English Football Association has also been charged with disruption of a national anthem, as well as providing an insufficient number of travelling stewards.