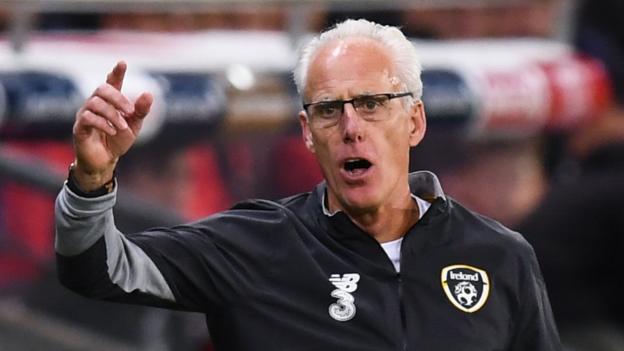 Republic of Ireland boss Mick McCarthy said he would have taken a “cup final” with Denmark at the start of qualifying after defeat by Switzerland left them needing to beat the Danes to guarantee their place at Euro 2020.

The Irish suffered a first Group D loss as goals from Haris Seferovic and Edimilson Fernandes secured a 2-0 win.

McCarthy’s side host Denmark in their final qualifier on 18 November.

“We’ve still got a chance to qualify automatically,” McCarthy said.

“It’s a cup final in the Aviva [Stadium in Dublin] and I’d have taken that. The unlikely thing was that we were going to come here and beat that Switzerland team. We’d have had to have played to our maximum.

“We’re playing Denmark and I’d have taken that at the start and I’ll take that now.”

The win for Switzerland strengthened their hopes of finishing in the top two and qualifying automatically for Euro 2020.

They are third with 11 points, one point behind Denmark and the Republic of Ireland.

“Switzerland proved they were a very good side,” McCarthy added on Sky Sports. “No shock to me. They have good players, who have played together for a long time.

“They were dominant in the first half but we had a second half we can be proud of.

“We haven’t scored that many goals. In the past we have managed to keep a clean sheet but we didn’t this time.”

‘We can get the three points against Denmark’

If that route fails, they may still have the fallback option of a play-off place.

However, 19-year-old striker Aaron Connolly, who made his full debut for the Republic, believes they can get the job done against Denmark.

“It was a disappointing night but there is still all to play for,” the Brighton forward said.

“I believe we can play against Denmark and get three points and qualify.”