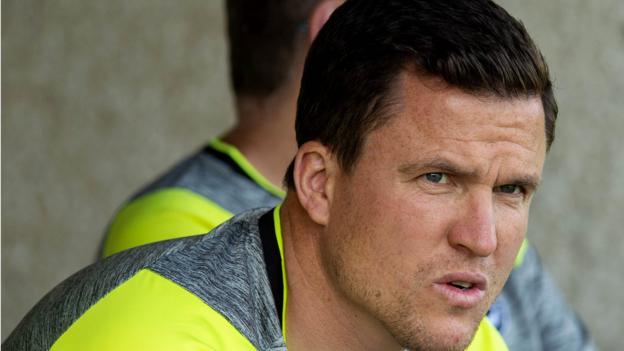 Gary Caldwell says he is more suited to managing Scotland than Partick Thistle.

The former defender was sacked in September after 11 months in charge of the Championship club, but believes he deserved more time.

He previously applied for the Scotland job before Alex McLeish was appointed in February last year.

“I don’t know how Championship players think. I do now, but I didn’t when I first went in.

“I feel like I could do it [the Scotland job]. I feel like I’m more qualified to do that than I am to manage Partick Thistle.”

Caldwell, who had spells as Wigan Athletic and Chesterfield boss before moving to Firhill, says his Thistle sacking was “a surprise”.

And he defended his record at the club while dismissing rumours of unrest among the squad.

“There’s a lot of stories come out of Partick Thistle. And until those players are named, then those stories aren’t real in my opinion,” the 37-year-old said.

“Of 24 players, only three didn’t call or text to thank me, to say they enjoyed it, to say they feel they’ve improved, to wish me all the best.

“If I get time, I believe in what I do. But so far I’ve not had that time and that’s a frustration.

“I’ve only had one full season as a manager where I started and finished it, and I won the league down at Wigan. Every other time, I’ve been sacked.”

Thistle finished sixth last season and were second bottom without a win when Caldwell was replaced by Ian McCall last month.

“We had to build two squads,” the former Celtic defender added. “In the January window we needed experienced players who could keep us in the league.

“Then in the summer we ripped that up to build a young, hungry team for the future. It lasted five league games.”