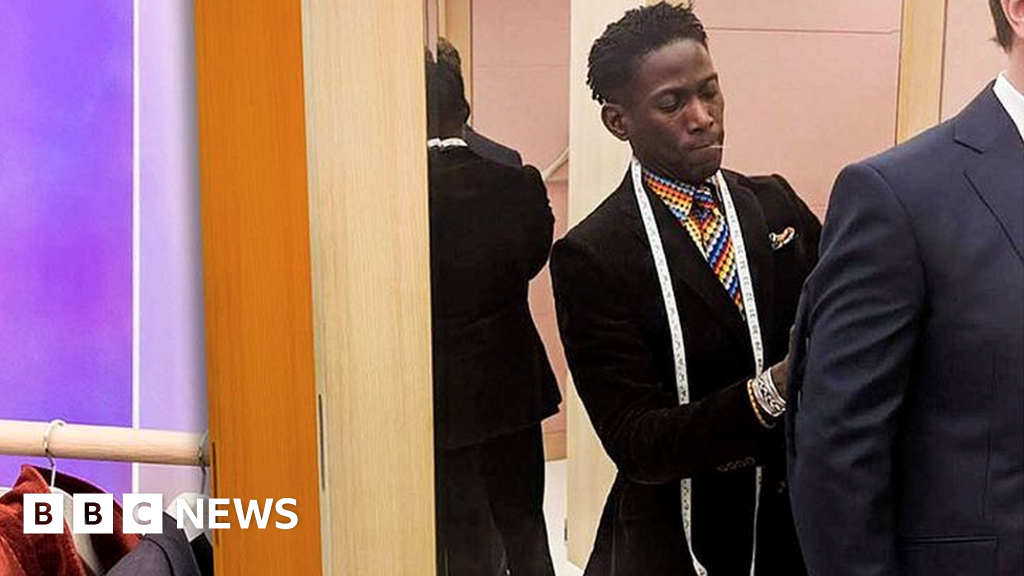 He and the other bespoke tailoring firms who line the world-famous London street feel bruised because, from Friday, every suit they sell to the US faces a new export tax of 25%.

They are on a list of products the US is targeting with tariffs in retaliation for the EU giving illegal subsidies to plane-maker Airbus.

And it has left Savile Row reeling.

“I don’t think anybody on the street was aware of [the tariff],” says James Sleater, founder and director of Savile Row’s newest tailor, Cad & the Dandy, whose clients include British rapper Stormzy and rugby player Mike Tindall.

“Conversations about Airbus and [US President Donald] Trump and Savile Row are not normally three words that go hand in hand,” he says.

The street has had little time to prepare for the tariff, which almost doubles the tax on an exported suit from roughly 13% to 25%.

On 2 October, the World Trade Organisation (WTO) gave the US permission to impose taxes on $7.5bn (£5.8bn) of goods it imports from the EU.

It was the latest chapter in a long-running battle between Washington and Brussels over illegal subsidies given to planemakers Airbus and rival Boeing.

That same day, the US published the list of EU products that would face the new taxes, including men’s woollen suits made in the UK, as well as cashmere knitwear and Scotch whisky – and told businesses the tariffs would come into force on 18 October.

The tariffs come at a crucial time for the UK, which is preparing to leave the EU and strike trade deals with other nations, including the US.

International Trade Secretary Liz Truss says: “Resorting to tit-for-tat tariffs is not in any country’s best interests and we are in regular contact with the Trump administration, urging them to refrain from resorting to such measures.

“As well as causing temporary disruption to UK businesses, it would also hit American consumers in the pocket.”

Kathryn Sargent, Savile Row’s first female master tailor, is concerned that her clients in the US, who make up a third of her business, may not be aware of the new tax.

She travels to cities such as New York, Chicago and Washington DC three times a year to visit customers, show them fabrics and do fittings for her suits, which start at about £5,500.

“It is a conversation that I’ll be having with my clients when I’m over there, to sense what their reaction is and to see if it puts them off placing future orders,” she says.

North America is an important market for Savile Row, as well as the wider British luxury industry.

Mr Sleater reckons that total sales of the street’s goods into the US total some £40m.

The US is also the second largest export market, behind Europe, for UK luxury products, according to Walpole, the trade body for the British luxury sector, and Frontier Economics.

But it is not just the business connection between the two countries that is important to Savile Row’s tailors.

“All the past US presidents have had garments made in Savile Row,” says Ms Sargent. “When you think of all the Hollywood greats like Fred Astaire and Cary Grant, there is a beautiful relationship between Savile Row and America, so this tariff really hits us hard.”

She hopes that her US clients’ “love of British quality craftsmanship” will overcome any concerns about the added cost of buying a Savile Row suit.

Small bespoke tailoring firms like Ms Sargent’s will not be able to absorb the cost of the tax.

Mr Dixon says that Richard James, one of the few Savile Row tailors with a store in the US, says it will do its best to absorb the cost: “But we think there will be a price… we will have to pass some of this on to our customers.”

Arguably, the type of people who have a bespoke suit made by a Savile Row tailor are not short of a pound or two.

“The customer base is fairly affluent,” admits Mr Dixon, whose clients include actor Benedict Cumberbatch, footballer David Beckham and rapper P Diddy. “Nevertheless, an increase is an increase and we pride ourselves on people getting value for money, especially for a Savile Row suit.

“The amount of man-hours that go into it, the incredible fabrics used and a suit that can last 20 years or 30 years and then to have a big part of that being paid in tax. I don’t know how people are going to feel about that.”

While Savile Row’s tailors were shocked by the tariffs, Walpole was not.

“We’re disappointed, of course,” says Charlotte Keesing, Walpole’s director of public policy and international. “But we’re not surprised that suiting and textiles and fine fabrics came so heavily top of the list.”

She says that UK luxury goods such as cashmere sweaters have often been targeted by the US in trade tussles.

In 1999, when Bill Clinton was in the White House, Scottish cashmere sweaters faced sanctions following a WTO ruling in a row between the US and the UK about bananas.

But Ms Keesing does not think this latest round of tariffs will have a major impact on sales of UK luxury goods.

“You have quite a weak pound at the moment and the number of US visitors coming to the UK to shop for these kinds of goods is at an all-time high, so I don’t think that the impact is going to be enormous,” she says.

President Trump, who reportedly favours suits made by Italy’s Brioni, described the WTO ruling at the beginning of October as a “big win” for the US.

But his jubilation – and any pain felt by UK businesses – may be short-lived.

Ms Keesing points out that next spring, the WTO will rule on Boeing, the US planemaker, which it found had benefited from tax breaks.

The EU could then be given the green light to enforce its own tariffs on US goods.

Mr Sleater says that while Cad & the Dandy was caught unaware by the new taxes, Savile Row should use the opportunity to elevate its brand, which has historically always been about understatement.

He says that while Italy’s suitmakers – who are not facing US tariffs – have actively promoted their industry, Savile Row has not.

“The key thing about this is to stomach the tariffs being placed on us and – I’m talking about the street here – we somehow need to find a way to make our clothes even more appealing.

“Never before has there been such a time when branding is really, really important.”