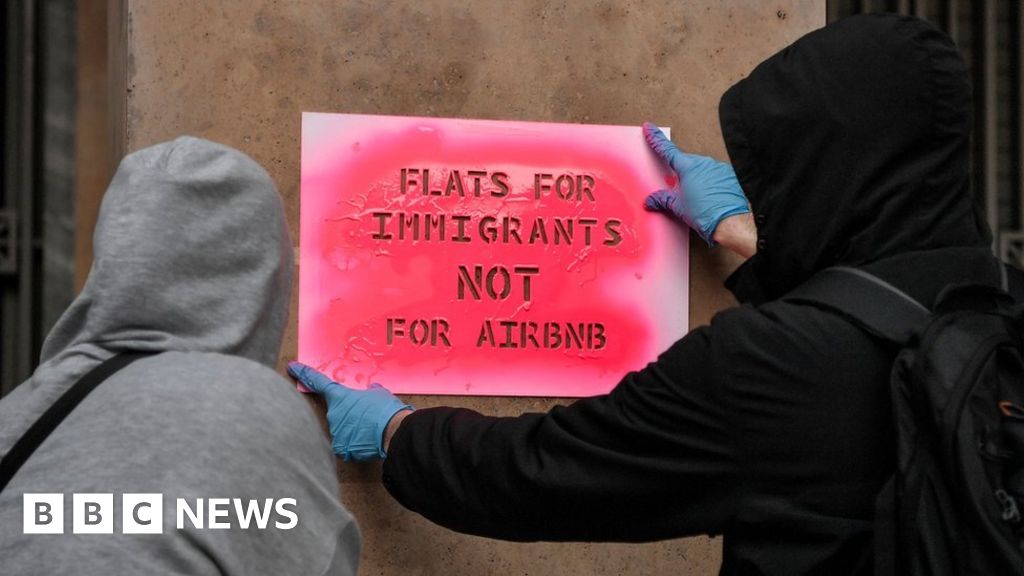 Activists in an Athens district known for its radical left-wing politics are confronting visitors who they say are causing the gentrification of their neighbourhood. But not everyone agrees that tourists – and the much-needed cash they bring – are the problem.

The graffiti spray-painted on the door was clear: “Evict Airbnb”. Locks in the building of rented-out flats were jammed with nails.

The vandalism happened in September, in Exarchia, a neighbourhood close to the heart of Athens.

Afterwards, a statement appeared online: “Instagram tourists, the cops won’t save you.”

“You are not welcome here and you are not safe here. Landlord, your door is next.”

Its founders say they want to use social media to inspire direct action against gentrification – a word often repeated by Exarchia residents. Many say the number of tourists visiting their district has steadily increased in recent years, with dire consequences for their community.

And much of their anger is directed at short-rental platform Airbnb.

Residents say the rapid proliferation of Airbnb properties has helped drive property prices and rents up, driving poorer people out. It’s a familiar story. A number of popular tourist destinations (such as New York, Lisbon and Barcelona) have seen protests against the company.

But, in Exarchia, the tension between landlords’ determination to make a living through Airbnb and some residents’ wishes to preserve their neighbourhood is particularly potent.

A history of radicalism

Exarchia holds an unusual place in Greek politics due to its history. In 1973, a student uprising at the National Technical University, which is situated on its borders, helped bring down the military dictatorship.

“It became a centre of counter-culture and a meeting point for young people from Athens,” says Tasos Sagris, an activist with Void Network, a self-described anarcho-communist group that believes in “the free distribution of materials and a world without money.”

This lead to the formation of a number of different political groups which protested, for example, Athens’ hosting of the 2004 Olympic Games and Greece’s austerity-driven response to a devastating debt crisis.

The murder of a 15-year-old schoolboy by a police officer in Exarchia back in 2008 lead to huge riots, and there have been frequent clashes with police ever since.

‘They shall not pass’

Today Exarchia is home to a number of far-left political groups and squats. Graffiti and posters with radical messages decorate the streets.

The area has also been plagued by high rates of homelessness and drug addiction.

Following a victory in July’s snap election, a new centre-right government has announced it intends to “clean up” the area, and has recently ordered police raids on a number of squats.

However, the activist groups are only part of the overall population here, with plenty of families, students and older people living nearby.

Exarchia’s central location – just a short walk from many popular landmarks in Athens – along with its edgy reputation has in recent years made it popular with tourists. They browse the area’s bookshops, record stores, and bars, and take “Instagramable” pictures of the political graffiti.

Many Greeks who suffered financially during the country’s brutal recession, during which the economy shrunk by almost a quarter, are on the lookout for extra income.

As a result of these trends, Exarchia is reported to have the second-highest number of Airbnbs in Athens. Despite the glut, rents are on the rise – one study suggests that they’ve increased as much as 30% since 2016.

Another factor is Greece’s ‘golden visa’ scheme, in which a five-year EU residency permit is granted in exchange for an investment worth at least 250,000 euros (£216,000).

Many of the radical far-left movements with a strong footing in the area have now begun calling for tourists to leave. They’re using social media to spread their message.

“The real problem is the touristification, which Airbnb is part of,” says Athina Arampatzi, a member of an Exarchia residents group. “We all recognised that Airbnb was a survival solution to the crisis for many people in the beginning.”

But now, she that solution has turned into “a threat”, resulting in people being pushed out of the neighbourhood.

“We have seen whole buildings being purchased by investors,” she adds.

Find out more about this story on the Trending podcast from the BBC World Service: download now.

‘Getting kicked out of homes is inciteful’

The “Exarcheia Tourism” social media accounts popped up in early 2019. “What I would like is to catch people’s attention before they even get here,” says one of the founders, who agreed to speak to the BBC under condition of anonymity for fear of reprisals by the authorities.

The account shares Instagram posts from tourists in the area, poking fun at their apparent naivety, and pictures of graffiti with slogans such as “Airbnb supporters go home… You are targets.”

“The main goal is to incite action against gentrification,” the founder says, adding that an “ideal result” would be for tourists to leave bad reviews on their hosts’ pages, thus discouraging future bookings.

Asked whether the page was openly inciting violence, the founder responds: “Getting kicked out of homes is inciteful”, and adds that anger in the neighbourhood would exist even without the page.

“Rents are doubling, bedrooms used to go for 200 euros and now they’re being advertised for 600 euros. It’s natural that in a place where people take direct action they’re going to target people they view as ruining the neighbourhood.”

“We’re not against tourism,” says he says. “We’re against the economic model of tourism that is tearing up cities.”

‘We do it to survive’

In a side street just behind the technical university, Antonio is renovating an old shop into a mini hostel.

“I bought this place 20 months ago and didn’t open it [immediately] because I was afraid,” he admits.

Although Antonio calls himself an anarchist, he has been running a number of Airbnbs in Exarchia since losing his job in a bank during the economic crisis. He sees no conflict between his beliefs and source of income.

“I started doing Airbnbs in the centre and people started asking me about Exarchia because they had read about it on the internet,” he says. “This money is not going to some big CEO… We do it to survive. I cannot find a job.” He adds: “No one can tell me what to do!”

‘Why are Greek anarchists telling tourists to leave?’ Listen to this edition of the Trending podcast.

Nearby sits the office of Athens Urban Adventures, which has recently received a lot of negative attention because of one of their tours: “Sweet Anarchy” (which happens to be promoted on Airbnb, among other platforms).

It was conceived as a tour of the neighbourhood that combined sightseeing with visits to sweet shops, but some residents took offence over what they perceived as “poverty tourism” or a veiled attempt to show Exarchia’s infamous side to foreigners.

She insists the “niche” tours have been embraced by many members of the community: “There are so many small family-owned businesses in Exarchia… we’ve got many offers from owners to go by and bring people in.”

She says Airbnb is helping revive the area, as families can now afford to renovate old apartments that were lying empty during the crisis. But she adds: “It’s got its drawbacks… which side you are going to support has to do with whether you are making money out of it, or not.”

An Airbnb spokesperson said: “While guests using Airbnb account for just 7% of visitors to Greece, they boosted the Greek economy by 1.2 billion euros last year alone, and more than half of hosts globally – who keep up to 97 cents of every euro they charge – say the additional income helps them afford their homes.”

The company said it takes “local concerns seriously” and that it will continue working with the Greek government to promote “sustainable, people-powered travel that makes communities stronger.”

As well as clearing out squats, many of which house refugee families, they intend to clean up the graffiti and open a metro station in the main square.

However, many activists and residents say the authorities are not targeting the real criminality in the neighbourhood such as drug dealing, and that the plans are ideologically motivated.

Online and on the streets of Exarchia, the conversation about the neighbourhood will continue. While there are some who welcome the direct action, many others are uneasy about it, even if they do agree that the tourist influx is a problem.

Athina Arampatzi, from the Exarchia residents group, says she would find any increase in actions that target visitors or Airbnb owners “worrying”.

“The point isn’t to go up against an individual that tries to make some income,” she says. “The point is to demand regulation around this market. Because if that doesn’t go through then we’re all doomed, basically.”

What did you think of this story? Let us know.