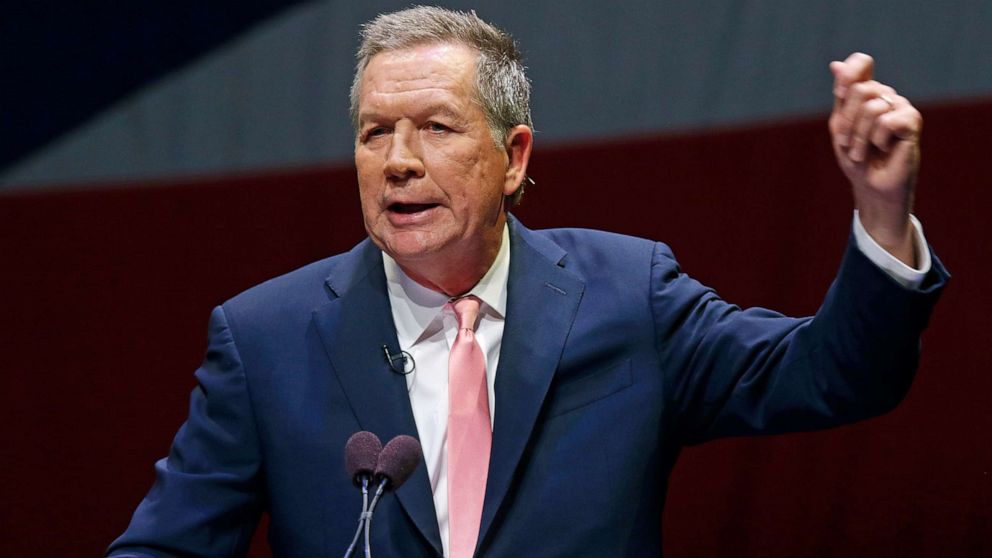 Former Ohio Gov. John Kasich said if he were in the House of Representatives today, he would vote to impeach President Donald Trump.

“I have no problem with the president of the United States withholding aid if it’s related to policy, but to withhold aid because you want some political operation to occur, I just think is dead wrong, and it just goes too far for me,” Kasich said on ABC News’ “Powerhouse Politics” podcast. “So if I were in the House, I would vote to impeach.”

Kasich, who sought the 2016 GOP presidential nomination and has been a frequent critic of Trump, said that while coming to the decision that an impeachment inquiry was necessary was “a piece of cake for” him, the decision to support impeaching the president was something he’d been struggling with.

While he said he didn’t really see the quid pro quo “at the time,” acting White House Chief of Staff Mick Mulvaney’s comments Thursday, “compounded by so many other things,” finally led Kasich to a decision.

“The final, final act was Mulvaney saying, ‘Yes, we did withhold this aid, because we wanted this investigation done about the 2016 election,'” he told ABC News Chief White House Correspondent Jonathan Karl and Political Director Rick Klein.

On Thursday, in an exchange with Karl during a press briefing, Mulvaney admitted there was a quid pro quo as it relates to Ukraine, saying that part of the reason Trump withheld military aid was to put pressure on the foreign government to investigate a debunked conspiracy theory from 2016 involving a hacked email server that belonged to the Democratic National Committee.

While Mulvaney said that the “driving factors” in Trump’s decision were his distaste for foreign aid in general — especially if it’s used in a corrupted way — and that he didn’t think European nations were giving enough financial assistance to Ukraine, he added, “Did he also mention to me in pass the corruption related to the DNC server? Absolutely. No question about that. But that’s it. And that’s why we held up the money.”

Karl pressed for clarity: “But to be clear, what you just described is a quid pro quo. It is: Funding will not flow unless the investigation into the Democratic server happens as well.”

Mulvaney replied, “We do that all the time with foreign policy.”

Later, he claimed the media “decided to misconstrue” what he said, saying in a statement: “There was absolutely no quid pro quo between Ukrainian military aid and any investigation into the 2016 election. The president never told me to withhold any money until the Ukrainians did anything related to the server. The only reasons we were holding the money was because of concern about lack of support from other nations and concerns over corruption.”

“I’ve now concluded there was a quid pro quo that was absolutely unacceptable,” Kasich told the hosts.

While Kasich supports impeaching the president, he hasn’t been happy with the way House Democrats have gone about conducting the investigation, taking issue with there not having been a formal vote, calling it a political move.

“When you’re going about impeaching a president, investigating a president, we don’t have time for politics,” he said, but added that he does think the House will move on impeachment.

As far as the timeline of the investigation goes, and contrary to others who have spoken out, the former lawmaker doesn’t think there should be a rush to get this done.

“I don’t think they should be in any hurry. I think they ought to do their job the right way,” Kasich said. “This is our country. There’s an investigation. Do it right. You shouldn’t have some calendar. You shouldn’t worry that you’re going to put your vulnerable members at risk. Tough. If you can’t do that then you shouldn’t have started this thing, OK? Plain and simple.”

When asked if he thought Republicans would ever vote to remove Trump from office, Kasich said he’s “not a fortune teller,” but referred back to his time in the House during the impeachment of former President Bill Clinton, which he voted in favor of. He said that back then, the fact that Clinton was likely to be acquitted wasn’t the issue for him in making his decision.

And he noted that the impeachment inquiry into Trump is just starting.

Klein and Karl also asked Kasich about Tuesday’s Democratic debate, which was held in the Ohioan’s hometown, Westerville.

He said that debates are a “silly way to pick a president.”

“You want to pick a president based on the sound bites? I mean, that’s what we’re doing,” he said. “These debates are pushing everybody to extremes to come up with a snarky answer, and it’s just — it’s just, you know, what’s there to watch?”

He took a shot at “Medicare for All,” a signature proposal for top-polling 2020 Democratic candidates Massachusetts Sen. Elizabeth Warren and Vermont Sen. Bernie Sanders, saying the American people don’t want to give up their private insurance for a government-run option. He also criticized a wealth tax supported by Warren, Sanders and billionaire candidate Tom Steyer, and made a slight pass at former Texas Rep. Beto O’Rourke’s proposal to institute a mandatory buy-back program for assault weapons, like a AR-15s and AK-47s.

Karl asked Kasich if his political days were behind him, and while he threw cold water on getting into this presidential election, he left open the possibility for trying to run again in the future.

“The only thing I really have an interest in is president, and I see no path at this point in time,” he said. “I’ll be younger when the next election comes around than all these top front runners running for president today.”

Kasich ended with this question, “Can somebody who doesn’t hold public office have a big enough voice to move the public? Is there a way to do it?”