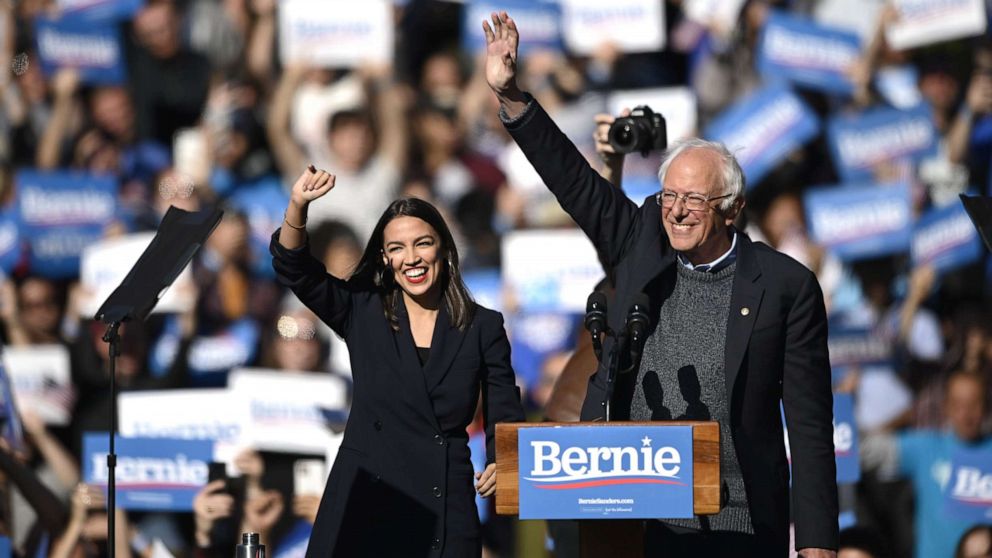 Vermont Sen. Bernie Sanders returned to New York City on Saturday, drawing the largest crowd of supports in the 2020 election cycle thus far and marking his return to the campaign trail after suffering a heart attack on Oct. 1.

New York Rep. Alexandria Ocasio-Cortez introduced the senator at the event dubbed the “Bernie’s Back Rally,” announcing her support of his candidacy in front of nearly 26,000 people who gathered at Queensbridge Park along the East River in Queens. Although she didn’t offer a full-throated endorsement from the rally stage, Sanders said the congresswoman would be traveling around the country as a surrogate for his campaign.

“It wasn’t until I heard of a man by the name of Bernie Sanders that I began to question, and assert, and recognize my inherent value as a human being that deserves health care, housing, education, and a living wage,” she said, at the park just miles from her district.

She outlined the issues she said are most important to her and her constituents — public housing, climate change, environmental justice, her support for a living wage and easier access to health care — that run parallel to Sanders’ platform.

During her remarks, Ocasio-Cortez framed Sanders as the leader of the progressive movement.

“Bernie Sanders did not do these things because they were popular,” she said. “He fought for these aims, and these ends when they came at the highest political cost in America.”

Ocasio-Cortez first served as an organizer for Sanders during his 2016 presidential run, and the two have introduced bold climate change plans. Two senior sources from the Sanders campaign told reporters after the Oct. 15 debate of a potential endorsement from the New York congresswoman.

When Sanders took the stage, he began by thanking his supporters for their well wishes in the aftermath of his hospital stint.

“I am happy to report to you that I am more than ready, more ready than ever, to carry on with you the epic struggle that we face today,” Sanders said. “I am more than ready to assume the office of president of the United States.”

After thanking Ocasio-Cortez and addressing his health, Sanders’ remarks returned to policy.

“Please remember that unbelievably the richest people in our country live 15 years longer than the poorest people. In other words, poverty is a death sentence,” he said. “And we’re going to end that death sentence.”

He spoke for nearly an hour highlighting racial disparities in wealth, health outcomes, climate change and criminal sentencing. He also talked about strengthening labor unions and targeting those with massive wealth and corporations.

Other members of the so-called squad — or liberal freshman congresswomen of color — have been tied to Sanders’ presidential bid. Minnesota Rep. Ilhan Omar announced her endorsement of Bernie Sanders with a video earlier this week. Michigan Rep. Rashida Tlaib hasn’t endorsed Sanders, but is slated to tour her district with the senator later this month.

The rally comes at a critical time for the Sanders campaign. Despite raising $25.3 million during the third quarter, national polling data compiled by ABC affiliate FiveThirtyEight shows Sanders backsliding in many of the polls, falling just short of Massachusetts Sen. Elizabeth Warren and former Vice President Joe Biden.

Results from an Oct. 14 Quinnipiac University poll showed primary voter support for Sanders fell around 11%, compared to Biden’s 27% and Warren’s 30%.

This is Sanders’ first campaign event — aside from the Oct. 15 Democratic debate — since his heart attack in Nevada and it could serve as a means to reinvigorate his campaign.