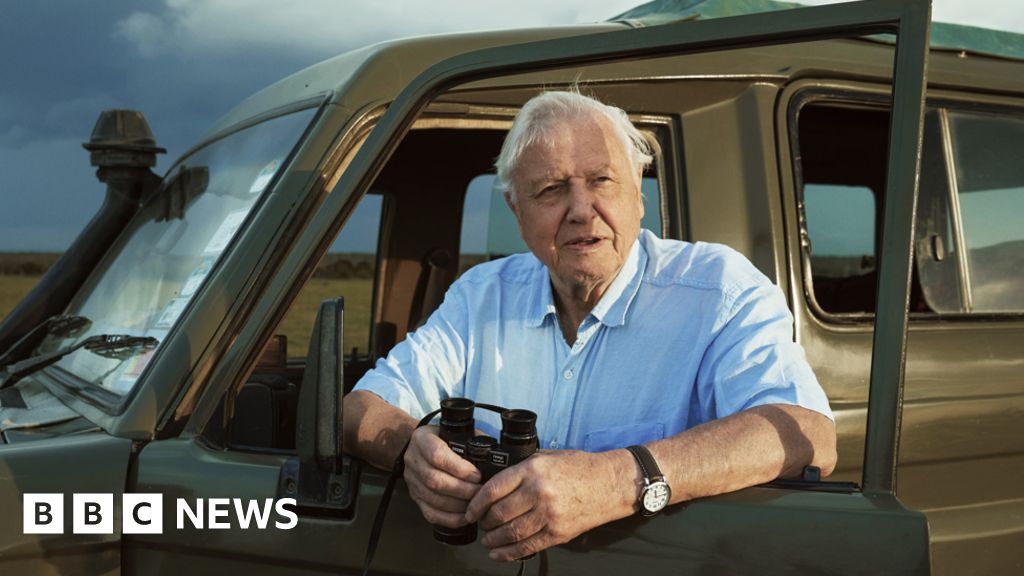 Ahead of the launch of his most ambitious series yet, broadcaster Sir David Attenborough talks to the BBC about his cult status, a lifetime protecting the planet and finally finding its most elusive animal.

This year’s Glastonbury Festival was headlined by Stormzy, The Killers, Kylie and The Cure, but the highlight for many was the surprise appearance of a 93-year-old knight of the realm.

Sir David Attenborough, who was there to promote his new series Seven Worlds, One Planet, walked out on to the Pyramid Stage to rapturous applause, thanked everybody on Worthy Farm for not drinking out of plastic bottles and urged them to keep looking out for all creatures great and small.

Several months on, he admits he finds his growing influence on the environmentally woke youth of today a bit bizarre.

“It’s very odd,” he laughs. “But the fact remains I’ve been at it 60 years. You can say nobody under the age of 75 can have been without my voice coming from the corner of the room at various times and that must have an effect.

“It’s a huge advantage for me because you go there with some sort of reputation and people are aware of you, and in a sense you’ve been part of the family for quite a long time, which is an extraordinary obligation really and a privilege.

“I’m sure there’s a hell of a lot of young people saying ‘for God’s sake why don’t they move over, give the others a chance,'” he modestly adds.

In truth, no-one is saying that.

The broadcaster, who recently had a boat named in his honour, was listed as one of the 100 Greatest Britons in a BBC poll in 2002.

Since then, his stock has risen exponentially due to natural history shows like Planet Earth, Dynasties and Blue Planet II – which brought the issue of plastic waste to the public’s attention and bumped climate change up the government’s agenda.

Last week, more than 80,000 people applied for just 300 tickets for an early screening of his new documentary, which arrives at what Sir David calls “the most critical moment on earth since the continents formed”.

The series, narrated by the “rock star” – as BBC boss Tony Hall introduced him earlier in the day – focuses on the human impact on climate change, animal diversity, poaching and deforestation across all seven continents.

The latest scientific research revealed the effects of climate change are speeding up, as world leaders met to discuss it in New York last month.

“At last nations are coming together and recognising we all live on the same planet,” Sir David acknowledges. “All these seven worlds are actually one and we are dependent on it for every mouthful of food we eat and every breath of air we take.

“We have it in our hands and we’ve made a tragic, desperate mess of it so far.”

And while the presenter won’t really be drawn on their methods, or that of political activists like Greta Thunberg (“they are young people and their voices will be heard”), he does admit his shows may have helped viewers the world over to open their eyes to “the facts”.

“I don’t think I’ve made a series in the last 40 years where I haven’t made the end an appeal about caring for the natural world,” he says.

“Its an extraordinary thing. At the time I daresay people thought we were sort of cranks or something.

“With Blue Planet II,” he goes on, “suddenly the world was electrified about the crime of chucking plastic into the ocean that can throttle and poison creatures, including ourselves.

“Quite what it is that makes the messages we all care for ring the bell, is very difficult to say. I dare say if we knew exactly how to do it we’d do it more frequently.”

Cutting edge technology – including portable drones capable of shooting in 4K – enabled them to delve inside caves, volcanoes, forests, swamps, jungles and blizzards, to capture animals that are new to science and new patterns of behaviour.

For director/executive producer Jonny Keeling, it was vitally important to place conservation stories at the heart of the series, so viewers can understand why certain animals are in decline. Such as the tale of the grey-headed albatross and its increasing struggle to recognise its own chicks once they are blown off the nest.

There are positive stories in there too though, notably how whales have come back from the brink of extinction since whaling was banned in 1986. His team were relieved to capture them on camera on just the final day of a seven-week shoot.

“That’s really important as you need to show people the hope and actually when we do something we can make a massive difference,” says Keeling.

“In a matter of two decades we can turn things around – we can stop the whales disappearing or we can save sharks.”

“I think there’s some key species,” he adds, “If they’re looked after you can bring back a whole eco-system and its richness.

“The best solution to climate change is preserving the natural world, preserving forests and oceans and looking after the animals.

Such is the global interest in any show connected to Sir David that schools in India and South Africa are dialled into the Q&A session following its London world premiere.

A boy in Mumbai enthusiastically asks the man himself what he can do to help the planet.

“The best motto to think about is to not waste things,” replies TV’s favourite teacher (sorry Walter White fans).

“Don’t waste electricity, paper, food. Live the way you want to live but just don’t waste. Look after the natural world and the animals in it and the plants in it too, this is their planet as well as ours.”

Finally, after more than 50 years of searching, Seven Worlds also sees Sir David catch up with his most evasive animal yet – “a wonderful creature” called the golden haired blue-faced snub-nosed snow monkey.

“I read about them in a scientific paper in the 60s,” he recalls. “I always had it in the back of my mind, and blow me, if this lot found it!

“In the Asia programme I think it’s one of the stars.”

And another name fit to grace the Pyramid Stage.

Seven Worlds, One Planet begins on BBC One at 18:15 GMT on Sunday 27 October.