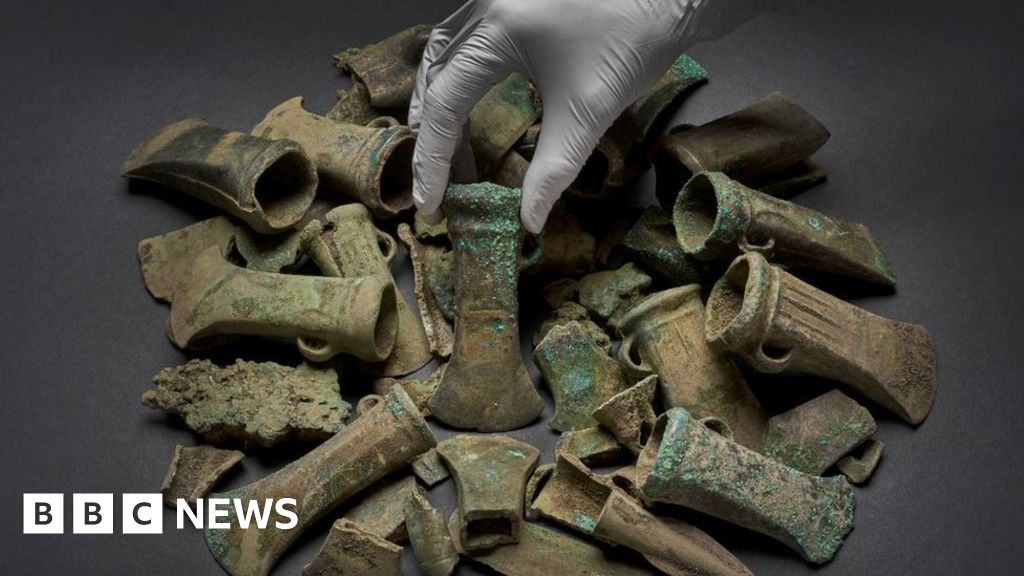 Ancient weapons discovered on a building site will go on display at the Museum of London Docklands next April.

The group of 453 artefacts found in Havering, east London, is the third largest ever discovered in the UK.

It “adds immensely to our understanding of Bronze Age life”, Historic England said.

The find, which dates from between 800BC and 900BC, was officially labelled a treasure by a coroner earlier this year.

The discovery, dubbed the Havering Hoard, was uncovered last September, and will form the centrepiece of a major exhibition.

Archaeologists believed the manner in which the weapons had been so carefully buried in groups close together suggested the site could have been a metal workers’ former vault or an armoury recycling bank or exchange, the Local Democracy Reporting Service said.

“It also underlines the importance of planned assessment and excavation in archaeological hotspots when new development comes along.

“The finds have already taught us a great deal about this distant age, and ongoing analysis and public outreach means that many more people will benefit from this window into the past thanks to this example of successful development-led archaeology.”

“It’s incredibly rare to have uncovered four separate hoards of such size on one site.

“This discovery is also of huge importance due to the deliberate placement of each deposit and raises questions as to why this treasure was buried in this way and why it was never recovered.

“These questions and more will be investigated in the exhibition.”