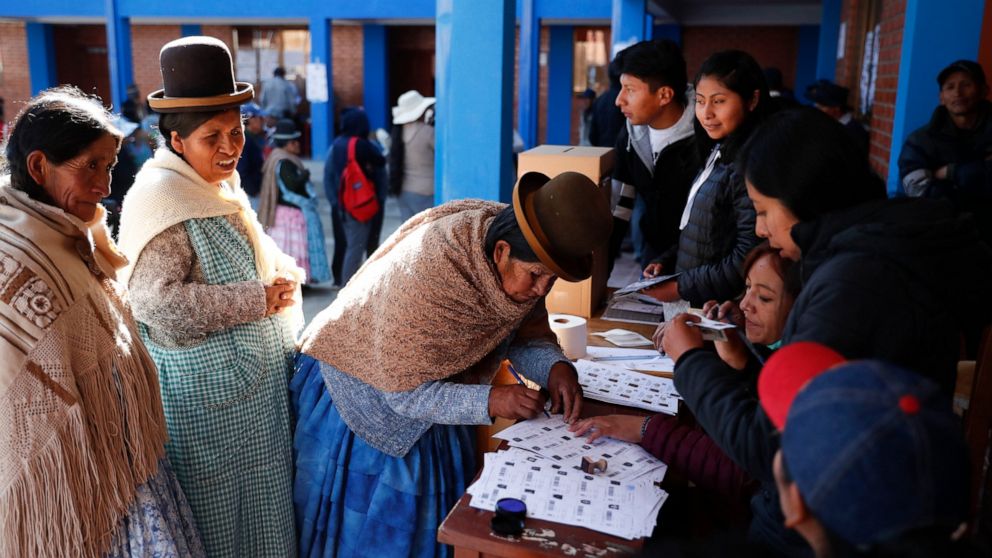 The latest on Bolivia’s election in which President Evo Morales seeks to win an unprecedented fourth term (all times local):

Bolivian President Evo Morales is leading in early returns from the first round of the presidential election, but he appears headed to a runoff in the tightest political race of his life.

Bolivia’s top electoral authority says that with 83% of Sunday’s vote counted, Morales leads with 45.3%, followed by 38.2% for his closest rival, former President Carlos Mesa. They will face off in December in those results hold.

Morales is a former coca growers union leader who has been in office for nearly 14 years. The 59-year-old leftist is South America’s longest-serving leader.

Mesa is a 66-year-old historian who as vice president rose to Bolivia’s top office when his predecessor resigned the presidency in 2003 amid widespread protests. Mesa then stepped aside himself in 2005.

Polls have closed in Bolivia after a calm election as President Evo Morales seeks an unprecedented fourth term in what is regarded as the tightest race of his political career.

The 59-year-old leftist who has been in office for nearly 14 years is favored to win Sunday’s first round vote. But polls suggest South America’s longest-serving leader will likely be forced into a December runoff in which he could be vulnerable to a united opposition.

Former President Carlos Mesa was expected to finish second and then face Morales in the runoff.

Voting was mostly calm, though police said they arrested more than 100 people for violating the country’s rigid election-day rules against drinking, large gatherings or casual driving.

South America’s longest-serving leader is seeking an unprecedented fourth term in Bolivian elections Sunday, but polls suggest President Evo Morales is in the tightest race of his career.

The 59-year-old leftist is favored to win the first round vote, but he is expected to be forced into a December runoff in which he could be vulnerable to a united opposition.

The son of impoverished Aymara shepherds won election as Bolivia’s first indigenous president in 2006, and he has used revenues from natural gas and minerals to redistribute wealth and lift millions out of poverty in the region’s poorest country.

But some Bolivians are frustrated by corruption scandals linked to his administration — though not Morales himself — and many by his refusal to accept a referendum on limiting presidential terms.