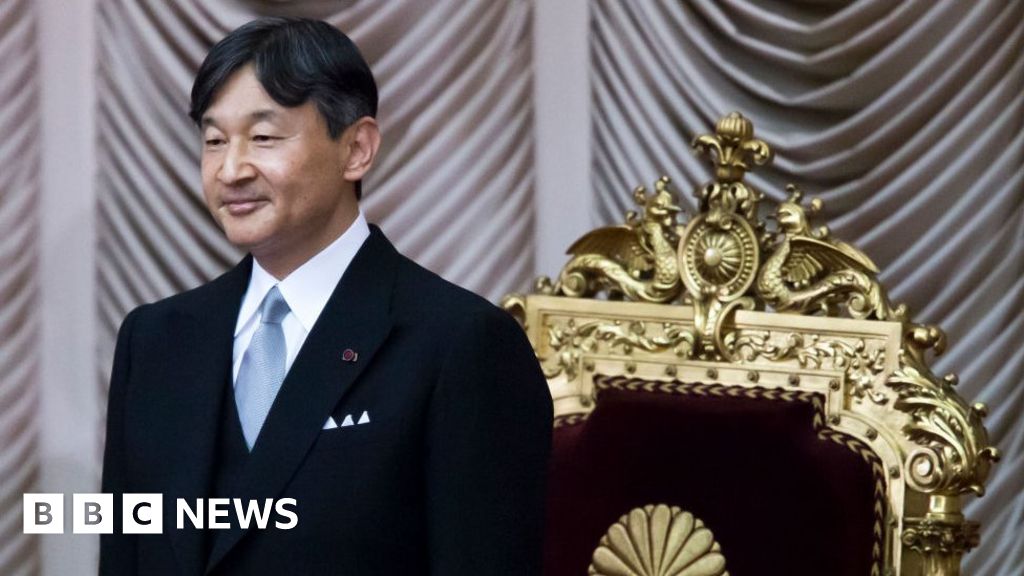 Japan’s Emperor Naruhito is set to formally ascend the throne in an elaborate ceremony on Tuesday.

The head of state, 59, officially began his reign in May, but his ascension will only be formalised after he completes a series of rituals.

His ascension comes as Japan is still reeling from the effects of Typhoon Hagibis, which left almost 80 dead.

A parade celebration has been postponed out of respect for the victims and their families.

More than half a million people convicted of petty crimes will also be pardoned to mark the enthronement.

Emperor Naruhito will ascend the 6.5m-high Takamikura throne while clad in a yellow-orange tone robe worn only by emperors on special occasions, according to news site Kyodo.

His wife, Empress Masako, will be seated on an adjacent throne.

The ceremony will be conducted in the presence of an ancient sword and jewel – sacred treasures that act as a symbol of imperial power.

The 30-minute long ceremony will end with the emperor delivering a speech, followed by a congratulatory address by Prime Minister Shinzo Abe.

Dignitaries from more than 170 countries, including the UK’s Prince Charles, will be in attendance.

The emperor will later host a tea party for foreign royalty, while Mr Abe will host a banquet in the evening.

An enthronement parade, which sees the emperor travel in an open-top car to “meet” the public, has been postponed until 10 Nov.

How big of a deal is this?

A pretty huge deal. The last time an enthronement ceremony took place was in 1990, when the then-emperor Akihito formally ascended the throne.

Former Emperor Akihito, the father of Naruhito, abdicated the throne in April this year, becoming the first monarch to do so in more than 200 years.

He received special legal permission to step down after saying he felt unable to fulfil his role because of declining health.

The emperor’s role is largely ceremonial, focusing on public engagement with citizens and meeting foreign dignitaries.

Emperor Naruhito officially began his reign on 1 May.

According to news site the Japan Times, the ceremonies conducted on that day were “simpler, and meant to signify the inheritance of the throne immediately”.

The Sokui no rei will be a much more elaborate affair.

It’s not uncommon for there to be a gap between the first succession to the throne and the Sokui no rei.

For then Emperor Akihito, there was an almost two-year gap between his succession to the throne and the Sokui no rei.

According to one Japanese expert, the reason for the confusion this time round is because then-Emperor Akihito’s abdication broke away from the normal procedure.

Usually, abdications only happen when a royal has passed away. The celebratory enthronement can only take place after at least a year of mourning.

“Normally the way this proceeds is that an emperor dies, and then of course they immediately install the next emperor, but in that case it seems a lot more normal that the main [ascension] ceremony will take place afterwards because [the country] is still in mourning,” said Ken Ruoff, author of Japan’s Imperial House in the Postwar Era.

But because the then Emperor Akihito had stepped down, the ascension of Emperor Naruhito was seen as much more of a celebration.

“The world just assumed that that was the combined celebration, but the real celebration is what’s happening now,” Ruoff told the BBC.

“It’s to this that the international representatives are coming, and incredibly elaborate banquets will be held. There was also supposed to be a parade. It’s not perceived as a big deal [to] the rest of the world who are like ‘didn’t we already do this?’ But it’s a big deal for the Japanese.”