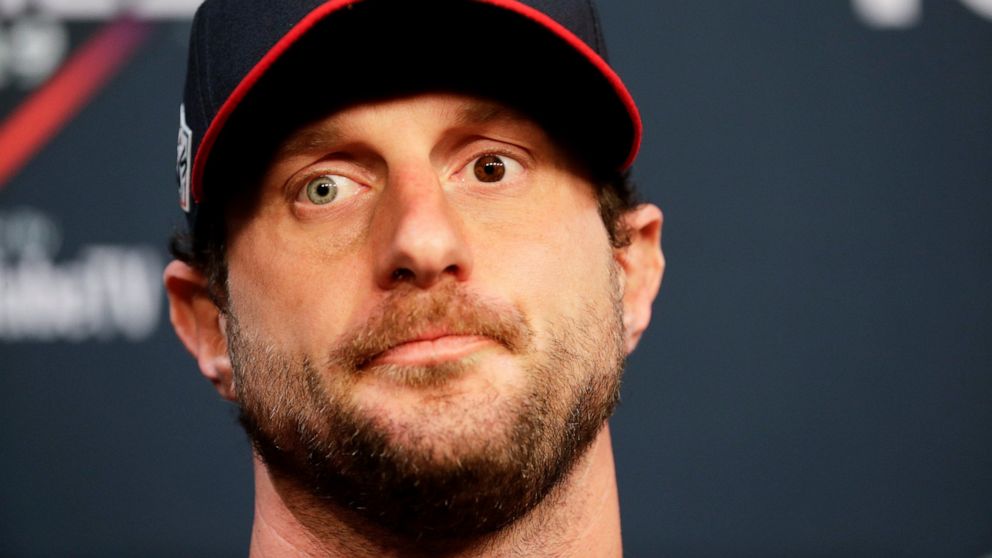 Max Scherzer was taunted over his eyes as a kid. Now he treasures them.

Washington’s Game 1 starter in the World Series against Houston has baseball’s most unusual orbs: blue on the right, brown on the left, a condition known as Heterochromia iridis.

“I’ve always celebrated it,” he said Monday, a day ahead of the opener. “Whether you liked it or not, that’s who I am.”

“Whatever picture he had, he just figured that was just part of normal,” said his father, Brad. “From first grade on, he’s always embraced it. He’s always thought it was fun. He’s always made light of it. It makes Max unique. So that’s why he likes it so much, I guess.”

Former big league pitcher Tommy Layne recalled facing Scherzer in youth ball back in suburban St. Louis. Scherzer was far bigger than Layne’s teammates and overwhelmed them. During the lineup for postgame handshakes, Layne looked up and noticed Scherzer’s eyes.

“No wonder we didn’t win, we were facing a cyborg,” Layne recalled thinking.

Caused by the level and distribution of melanin in the irises, the condition’s name comes from the Greek “heteros (different)” and “chrom (color).” A study of 25,346 people in Vienna released in 1979 found an occurrence in 65, or 0.26%.

Seymour, who has one green eye and one brown with a small speckle of blue and green, recalled the day Harry Saltzman and his co-producers were about to introduce her at an early 1970s news conference for being chosen to play Solitaire in the James Bond film “Live and Let Die.”

“And then they looked at me and said, wait a minute, you have two different colored eyes. And I went ‘Yes’ with joy. And they said, ‘Oh, well, you’re going to have to wear contact lenses. We’re going to have to dye your hair black,'” she recalled Monday. “And I remember, I looked at Harry Saltzman and said, ‘Should I have a wooden leg? What else are we going to change about me? I’m so perfect. You’re about to show me to the world’s press. I’ve never done anything like this in my life, and it’s going to be terrifying anyway. And the first thing you said before I go out there is that I’m imperfect because of my eyes.'”

Scherzer’s unique lenses were twice celebrated in 2014 with different colored orbs on bobbleheads, first by the La Crosse Loggers, a Northwoods League collegiate summer league team in Wisconsin he played for in 2004, then then by the Tigers when they played Toronto.

Nationals Park has a large photo of Scherzer above the second deck in right field, a shot mostly in black and white but emphasizing the blue and brown of his eyes. The team has been flashing a graphic on their outfield fence videoboards showing his eyes with “K” in the pupils to denote strikeouts — he led the NL annually from 2016-18 before a back injury cost him about month this year.

He wore goggles with blue and brown lenses during postgame clubhouse celebrations, and he has adopted two dogs with the same condition: Rocco has different colors in each eye and Bo has eyes of half blue and half brown.

“It seems everybody kind of outside the baseball world will always text me photos of, ‘Hey, you should get this dog. It’s got two different color eyes,'” he said. “It makes it easy, there’s a lot of dogs out there that have that.”

Seymour, whose 23-year-old son Kris Keach pitches for the Tucson Saguaros of the independent Pecos League, plans to be rooting for Scherzer on Tuesday night. As far as she’s concerned, the eyes have it.

“I meet a lot of people who say their kids have been tormented and tortured at school because they have two colored eyes. And could I possibly speak to their child to let them know that this is not something to be ashamed of,” she said. “It’s something wonderful.”