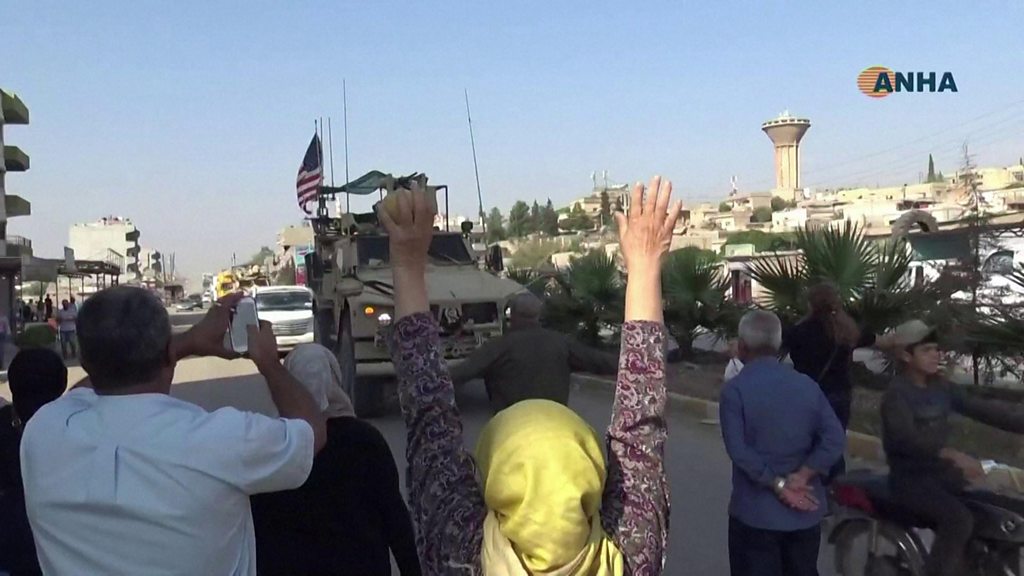 US President Donald Trump says some American troops will stay on in Syria despite his call for them to be pulled out.

He said a small number would protect oil fields while others would stay near Israel and Jordan.

His decision two weeks ago to withdraw US forces from the Syria-Turkey border region drew criticism even from some of his supporters.

Soon after Turkey launched an offensive against former US allies the Kurds.

The US president again defended his decision to withdraw, amid accusations he has betrayed Kurdish-led forces who have been an important partner in the battle against Islamic State.

“Why should we put our soldiers in the midst of two large groups, hundreds of thousands potentially of people, that are fighting? I don’t think so,” he said. “I got elected on bringing our soldiers back home.”

But Mr Trump also said the US had been asked by Israel and Jordan to leave a small number of troops in “a totally different section of Syria”.

In another part of the country he said US forces were needed to “secure the oil”.

Turkey moved against Kurdish-led forces in Syria with the aim of pushing them away from northern Syria and create a “safe zone” for resettling up to two million Syrian refugees currently in Turkey.

Up to 300,000 people are reported to have fled their homes since the fighting started.

A ceasefire is currently in place to allow for the withdrawal of Kurdish-led forces from the area but is set to run out at 22:00 local time (1900 GMT) on Tuesday.

Mr Trump has not ruled out the possibility of an extension.

In a separate development, three current and former defence officials told NBC that the Pentagon has begun drawing up plans for a quick withdrawal of all troops from Afghanistan in the event that Mr Trump orders an immediate withdrawal as he did with Syria.

Mr Trump has been heavily criticised over his decision to remove US forces from Syria.

The US House of Representatives voted overwhelmingly to condemn the president’s withdrawal of troops, with both Democrats and Mr Trump’s fellow Republicans approving the measure.

In an opinion piece in the Washington Post, Republican Mitch McConnell said it was a “strategic mistake”.