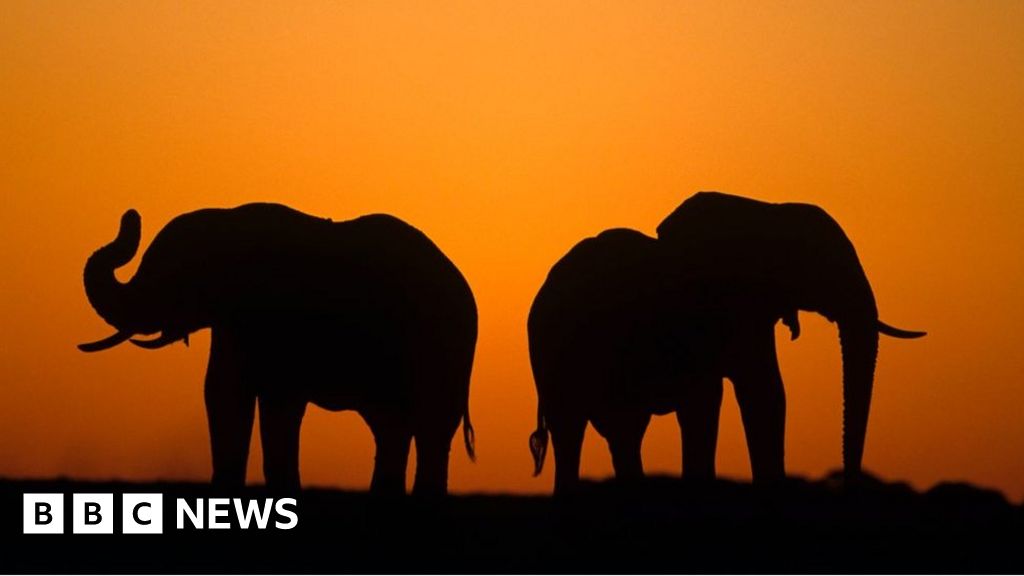 Botswana will hold general elections on 23 October and as a BBC World Questions debate found out in Gaborone, diamonds and elephants could play a sizeable role in deciding who wins.

The ruling Botswana Democratic Party (BDP) has won every election in Botswana since independence in 1966, but this year there is a real chance that could change.

Three of the opposition parties have united under the Umbrella for Democratic Change (UDC).

They have a carefully pitched manifesto promising 100,000 jobs. In a country where more than 20% of the population are unemployed, and where there’s a growing anxiety about “incomers”, that is an attractive proposition.

UDC vice-president Dumelang Saleshando told the BBC debate that “it’s about an economy which has excluded its citizens”.

“If you go to construction, it’s a Chinese-dominated sector. If you go to retail, it’s Asian-dominated… there isn’t a single industry in this country dominated by Botswana except the informal sector.”

A country built on diamonds

Botswana is often called an African success story – its independence was achieved without the bloodshed experienced by some of its neighbours, it has never had a civil war and its elections are usually unmarred by violence.

Part of Botswana’s good fortune is down to its diamonds. Four mines across the country produce the greatest quantity of high-quality gems in the world – although Russia produces more diamonds overall – and it shares its virtual monopoly 50-50 with De Beers, which describes itself as “the world’s leading diamond company”.

The deal brought $3.5bn (£2.7bn) in government revenue last year, and the trade represents up to 40% of the country’s economy.

The money has built roads, schools and hospitals but after more than 50 years, many people have started thinking they should be getting more out of their good luck.

This year, rumours of corruption have contributed to growing scepticism about the relationship.

The partnership with De Beers is up for renewal in 2020 and has become a big issue in the election. The prospects of a better deal was the first question asked at the BBC debate.

Transport and Communications Minister Dorcas Makgato defended the government’s approach to the negotiations.

“Diamonds for us are our tomorrow. We are the biggest producer of diamonds in the world so it would be suicidal for us not to treat that commodity with the respect and love it deserves.”

But the negotiations had to remain a secret, as the government could not show its hand, she said.

“Ninety-five percent of the people here have never seen a diamond with their own eyes. The truth is good-paying jobs are created in foreign countries though Botswana diamonds. We just remain diggers – we just dig the holes.”

Despite, or because of, its diamond riches, Botswana has one of the highest rates of income inequality in the world, according to the World Bank, and its people are starting to question why.

The election at a glance:

Find out more about Botswana

The elephant in the room

Botswana must be the only country in the world where elephants are a heavyweight electoral issue.

With a small human population and the largest herd in Africa, human-animal conflict is a daily worry. Under the previous President Ian Khama, Botswana became a beacon of conservation.

His government gained praise around the world for enforcing effective anti-poaching measures, for banning hunting and for turning the country into the largest elephant sanctuary in Africa.

Elephants are smart and some may have migrated to Botswana to take advantage of the good conditions. But this has come at a price.

With a national herd of some 140,000, the elephant population has outgrown the environment.

People are trampled to death, entire crops are destroyed in a day and there is a growing resistance by the government to being told what to do by well-meaning foreigners.

President Mokgweetsi Masisi seems less concerned with what the international community thinks than his predecessor.

He suggested the British could try living with Botswana’s elephants if they liked them so much.

Defying his still-powerful predecessor, the new president has lifted its ban on trophy hunting. This has caused some controversy but it looked like a very popular decision when the BBC asked people on the streets of Gaborone.

“There’s a conflict between elephants and human beings and they are killing people. So I think killing elephants is a good idea,” said Albert Lebala.

Keorapetse Mpolokang agreed: “They do a lot of damage to the crops, especially during the ploughing season.”

While a young woman echoed the president’s position: “If other countries want to air their opinions about us lifting the hunting ban, they should first come to our country and look at the effects the elephants have left [on] our people.”

The elephant issue is one of the causes of the seismic rift between President Masisi and Mr Khama.

He is the son of the country’s founder and an important cultural leader in Botswana’s central heartland, so his split from the party he once led to found the Botswana Patriotic Front (BPF) is big news.

Tshekedi Khama, his brother, caused shockwaves by resigning from Mr Masisi’s cabinet and joining his brother to fight the BDP.

They are not part of the main opposition UDC but have suggested they may work with them and help them into power.

Although there is no polling in Botswana, commentators say there is a bigger chance of a change in government than ever before.

But the BDP is a hugely effective vote-winning machine and has never been beaten.

People look east to Zimbabwe and know that they have been spared the turmoil seen in many of its neighbours.

There seems to be a battle in people’s minds between trust in the BDP, and a chance to escape the stagnation and waste that seem to have accompanied such a long period in office.

“The BDP is a good party but it’s in its comfort zone. There’s nothing going on there,” said Manny, a small business owner.

Although he went on to warn: “We need a change – even though I’m afraid there will be bad consequences if we do.”

The UDC is banking on being able to persuade people that in order to mature, their democracy needs to have a new party in power. But understandably, with no previous experience of any other party in power, there is concern that any change could go horribly wrong.