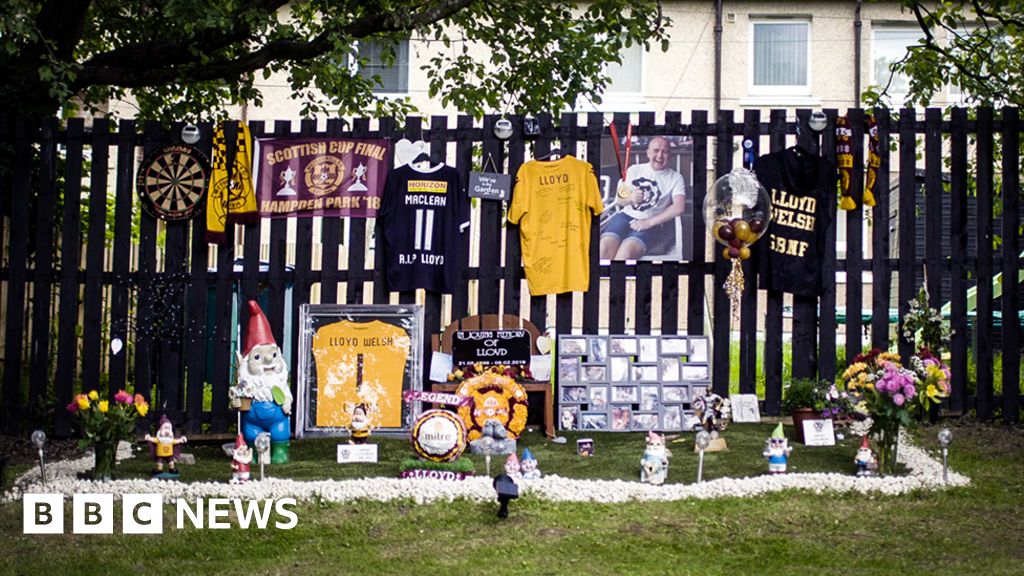 Suicide in Scotland is at a five-year high with three times more men than women taking their lives last year. Families from two former industrial towns, Motherwell and Wishaw, speak about losing brothers, sons and partners.

It was a blustery February afternoon when Yvonne Welsh shut the door of her Motherwell home. She had gone to run errands and had left one of her three sons, Lloyd, playing video games in his bedroom.

Having been away for no more than 40 minutes, Yvonne returned to an unusually quiet house. “I shouted up to Lloyd that I’d got a McDonald’s. I texted him. He didn’t reply. He always had his phone on him. I shouted on him. No reply.”

Moments later she discovered her son was dead.

The 22-year-old had taken his life in the family home but had given no warning and had left no note.

Lloyd’s parents and brothers try to remember the smiling young man who would play practical jokes, and not the boy who retreated into himself in the last year of his life.

Yvonne says she sometimes feels angry and guilty but mostly she feels sad that her son could not come to her. “Lloyd doesn’t know what he’s done to this family,” she says.

The death has had a profound impact on Jordan, Lloyd’s 26-year-old brother. He is a standout player for local amateur football team Motherwell Thistle, a club which has been scarred by suicide.

‘I know that he loved me’

In 2017, Thistle player John Fowler killed himself. It was the beginning of a number of suicides connected to the team. In August last year, the team’s goalkeeper Paul Gerard Aiton – or PG, as he was known – killed himself at home.

When the team lifted a trophy at the end of the season, they wore black armbands bearing his name. His family – including an infant daughter PG he would never meet – watched from the stands.

Like Lloyd, PG gave no warning. His mother Catherine says she feels “angry, embarrassed and ashamed of him”, but she still loves him.

“I love him to bits, it’s unconditional. It’s so hard, knowing you’re never going to see him again – ever.”

When PG died, his partner Naomi was three months pregnant.

It was “brilliant” when Faith was born, says Naomi. She adds: “But at the same time when I was in the hospital I was thinking, ‘where is he?’.

Motherwell Thistle, like each of the families, is having to cope with the grief of suicide. Four young men who are linked to the club have killed themselves in the past two years.

Margaret McMillan, the club’s secretary, said she felt she had lost sons. With so much sadness surrounding the team, there have been times she has contemplated giving it up. “But I’ve got 18 other guys on this team that you can’t give up on. You’ve just got to keep going, and try and do your best, and that’s all we can do.”

Are you struggling to cope?

Call Samaritans free on 116 123 (UK and Ireland) or visit the Samaritans website to find details of the nearest branch. Samaritans is available round the clock, every day of the year. Mind has a confidential telephone helpline- 0300 123 339 (Monday-Friday, 9am-6pm).

In Wishaw, three miles east of Motherwell, there have been more deaths – Daryl O’Rourke (17); Stephen Mearns (19); Callum Dunne and his friend Murray (both 16) all killed themselves within a seven-week period in the spring of 2018.

Some of the boys were friends, others knew of each other and, like Lloyd and PG, none gave any warning.

They left behind families, friends and a community still asking why so many young lives were lost in this way and so close together.

“It felt as if there was one suicide after another,” said Shannon Brown, the sister of Callum.

On 23 May 2018, a front page of the Wishaw Press featured three black-and-white photographs of Murray, Callum and Stephen, with the headline “Why?”

“Enough is enough,” it declared. “We need to talk about suicide.”

Motherwell and Wishaw sit in Scotland’s central belt, 20 miles east of Glasgow and 40 miles west of Edinburgh. They were towns built on a powerful industrial base of coal mines and steel works. All are gone.

Ravenscraig steel plant, on the border of the two towns, was once the busiest steel-maker in Western Europe employing more than 10,000 people. Now it’s one of the continent’s largest brownfield sites.

Lloyd’s brother Jordan plays home games for Motherwell Thistle at the new sporting complex near the site, which is named after Ravenscraig.

The area has been in economic decline and it wears the signs – shuttered shop fronts and pawn shops offering to buy gold. 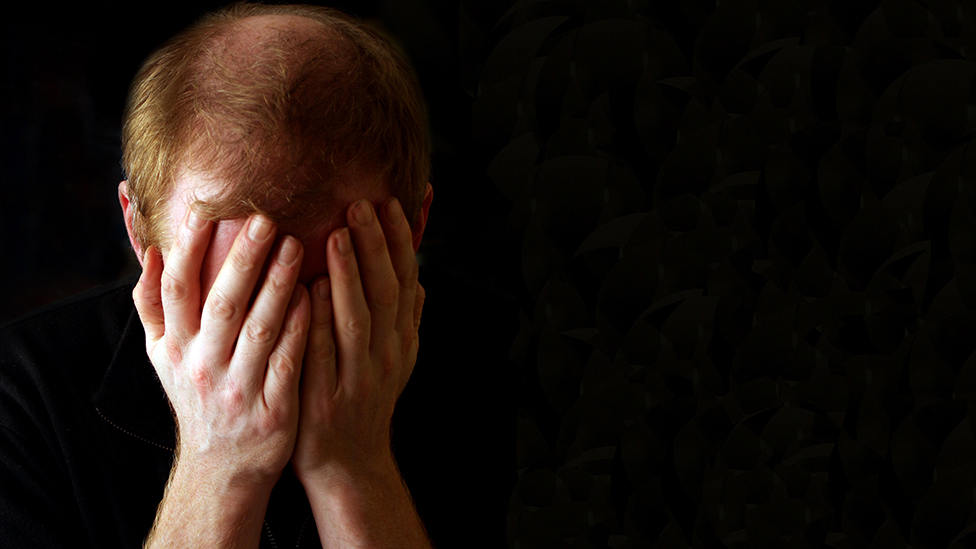 NHS research suggests suicide is three times more likely among those living in the most economically deprived areas than in the least deprived, and more likely to occur in areas which have experienced deindustrialisation.

Three quarters of people who kill themselves in the UK are men. In Scotland, which has the highest suicide rate in Britain, more than half of those who died in this way last year were under 45.

When Scotland recorded a five-year high of 784 suicides in 2018, one of the striking aspects of the data was the 50% rise in deaths of those aged under 24.

BBC Scotland’s Disclosure studied 845 death records of those under 50 in Motherwell and Wishaw over a 10-year period from 2008 to 2018. There were at least 72 suspected suicides.

The number of those aged 25 and under who killed themselves in these years remained low, with one or two a year. However, that number rose to seven last year, the year that Murray, Callum, Stephen and Daryl died.

‘I felt guilt that I couldn’t save my son’

Anne Rowan’s son Christopher killed himself in 2011. After struggling to come to terms with his death for a number of years, she founded a charity in his name, Chris’s House.

Occupying an old bank building at the foot of Main Street, it is a crisis centre offering 24-hour direct support and counselling to those at risk or bereaved by suicide, the first of its kind in Scotland.

According to Anne, it is a vital service for those in need in the area, helping hundreds of people since being established in 2015. And it’s getting busier. “In one month, we had 948 counselling hours,” she said.

The “whole aim” of Chris’s House is to stop people dying from suicide, something Anne says is “everyone’s business”. “You know you’re halfway there when they’ve come through the door,” said Anne.

“I don’t envisage that we will obliterate or eradicate it. It would be nice if we could minimise it to the point where the NHS can deal with the suicide rate on their own, that we didn’t need the charities, but I don’t think we’ll ever see that.”

Few of these young men were in touch with mental health services prior to their deaths. Getting this cohort to come forward and ask for help remains a major challenge. If services don’t know someone is in crisis, how can they help them?

After a 20-month period where none was in place at all, the Scottish government launched a new suicide prevention plan in August 2018, pledging to cut suicides by 20% in the next four years.

The issue of suicide has seeped into the local consciousness – the press coverage, the charity football matches and the online tributes.

Dr Alastair Cook, a consultant psychiatrist for NHS Lanarkshire, believes it is important to recognise that suicide is “an extremely rare event”.

“But it generates a huge amount of fear within the community around what might be happening with our young people.”

He thinks the ability of social media to influence the way communities respond to suicide means there is much more awareness around young people’s mental health and wellbeing.

And for Dr Cook that awareness is a “double-edged sword”. “I think awareness is actually a good thing, provided awareness doesn’t then generate fear. And it’s how we help people to understand that, I think is really important.”

Motherwell FC has become the first Scottish Premiership club to display suicide prevention messaging on its shirts – such is its proximity to the issue. It has made social media videos featuring its first team and partnered with the local council to promote awareness among fans who include those most likely to kill themselves – men in their 20s, 30s and 40s.

According to the Fir Park club’s chief executive, Alan Burrows, at least 24 of its supporters have taken their lives in the last two years. Lloyd Welsh, a diehard fan, was one of them.

“We have examples of the football club where we have managed to stop something tragic happening. The problems that you have, we can get you help. We can speak to people, we can put you through to the right people. And that’s the message that we’re trying to drive as a football club.”

Football is woven through this story. Many of the young men who’ve died not only played the sport, but football was seemingly a central pillar of their identity. But has something grown up around the culture of football and the way that it’s consumed that’s perhaps detrimental to young men’s mental health?

Match days consist of watching the game, but also often of excessive drinking, drug taking and smartphone gambling either side of it, all of which can be key drivers of mental ill-health.

Burrows, though, sees the sport as a positive. “I see football as the way that people can come and forget their problems, have that release. Have time with their friends and family, to talk to people if they need help.”

In May this year, hundreds of people walked through the night along the banks of the River Clyde in Glasgow in memory of friends and loved ones they had lost to suicide. The annual Walk of Hope event also raised funds for Chris’s House. Jordan Welsh was among those who walked until the sun rose, as was Naomi Foster Aiton.

All the participants were invited to light candles for their loved ones, and many lined up to throw yellow roses from a bridge into the river, the petals floating across the black glassy surface in the first light of that misty morning.

Catherine wants to stop other boys being lost to suicide. And she has a message to those who find themselves in crisis: “Step back, take five minutes, think about what you’re doing to the people who love you.

“Think about what you’re doing to your mum. Do you want your mum to be like me? Even if you don’t feel as if you love yourself, somebody does.

If you or someone you know is struggling with issues raised by this story, find support through BBC Action Line.