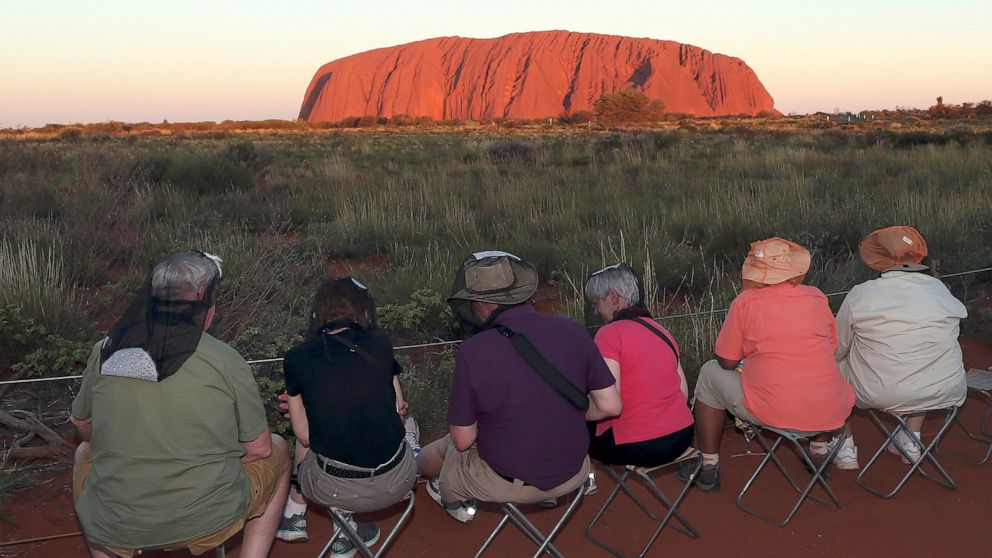 The sandstone monolith called Uluru that dominates Australia’s arid center has long been celebrated as a prized peak to be conquered and a sacred site to be revered.

But the pendulum is scheduled to take a major swing away from the throngs of international selfie-seekers toward the rock’s cultural significance to its traditional owners when climbing is banned from late Friday afternoon (6:30 GMT).

The ban was a unanimous decision made two years ago by 12 members of the Uluru-Kata Tjuta National Park Board of Management. But it’s an outcome that has divided both indigenous Australians as well as the wider world.

The polarity of opinions has been highlighted in recent months as thousands of visitors have converged on one of Australia’s most famous landmarks in unprecedented numbers to beat the ban and make a final trek to the top. Tourists have been illegally camping on roadsides for miles because the local camping ground and accommodation were booked.

Like many Australians who know the landmark simply as “the Rock,” Jeff Lis regards the climb as a birthright. The 52-year-old and his lifelong friend Stefan Gangur, 51, drove from Melbourne on the southeast coast to Australia’s so-called Red Center.

“I’ve got some pretty strong views on it personally. I was born in Australia, it is part of my culture and ancestry as much as anyone else’s,” Lis, who is not an indigenous Australian, said at Uluru.

Sammy Wilson, who chaired the board that banned the climb, described the pending prohibition as a cause for celebration. Wilson is member of the Anangu tribe who are Uluru’s traditional owners.

“If I travel to another country and there is a sacred site, an area of restricted access, I don’t enter or climb it, I respect it,” Wilson said. “It is the same here for Anangu. We welcome tourists here. We are not stopping tourism, just this activity.”

There has long been tension within the indigenous population around the money that climbers bring and the rock’s significance as a sacred site.

“I am happy and sad, two ways,” said Kevin Cooley, a resident of the Mutitjulu indigenous community in the rock’s shadow who collects the Uluru tourists’ garbage. He fears that tourist numbers and the local economy will decline.

The biggest drop in foreign visitors could be the Japanese who have proven to be the most committed climbers. Signs around the rock have long discouraged climbing, describing Uluru as a “place of great knowledge” and noting that Anangu traditional law prohibits climbing.

The proportion of visitors who climb has been steadily declining, with more than four in five visitors respecting the Anangu’s wishes in recent years.

The Anangu refer to tourists as munga, their word for ants. The analogy was clearest in recent weeks with queues forming long before the climb opens at 7 a.m. each day at a chain handhold at the base of the rock’s steep western face. From there, an eclectic mix of climbers begin their ascents in narrow columns.

Prominent indigenous academic Marcia Langton reacted to the stream of climbers converging on Uluru with a tweet: “A curse will fall on all of them.”

“They will remember how they defiled this sacred place until they die & history will record their contempt for Aboriginal culture,” Langton added.

Minister for Indigenous Australians Ken Wyatt said he was disappointed by the final rush to climb the rock which is renowned for its changing colors with the seasons and the time of day.

“It would be equivalent to having a rush of people climbing over the Australian War Memorial, if I can be so brazen in that regard, because sacred objects, community by community, are absolutely important in the story of that nation of people,” Wyatt, who is indigenous, told Australian Broadcasting Corp.

Reaching the rock doesn’t guarantee the summit is attainable. Climbing is often cancelled at short notice because of high winds or heat. The start of the climb was delayed for three hours Friday morning because of wind. Some of the climbers had been waiting at the base since 4 a.m.

At least 37 climbers have died, mostly from medical events, since 1948 when the first road was built in the hope of attracting tourists. Every death causes the Anangu anguish.

Denying climbers access to the World Heritage-listed landform is part of an evolution of the Australian narrative since British colonization that has traditionally edited out the original inhabitants.

While the rock had been known as Uluru for thousands of years, explorer William Gosse was credited with discovering it in 1873 and named it Ayers Rock after the then-premier of the British colony of South Australia, Sir Henry Ayers.

In 1993, it became the first official dual-named feature in the Northern Territory when it was renamed “Ayers Rock / Uluru.” The order of the names was reversed a decade later at the request of regional tourism operators.

But the tourist accommodation nearest Uluru retains the name Ayers Rock Resort, in deference to the monetary value of the international brand recognition that has built up around it.

The date of the closure is also significant in the history of restored indigenous influence in the region. Saturday — the day from when climbing becomes punishable by a 6,300 Australian dollar ($4,300) fine — marks 34 years since the federal government gave the Anangu the land title to the national park in which Uluru stands.

The traditional owners immediately returned the park to the government under a 99-year lease on condition that the park is jointly run by a board with a majority of Anangu members.

Grant Hunt, chief executive of Ayres Rock Resort operator Voyages Indigenous Tourism Australia, dismissed predictions of a significant decline in tourism. He said bookings in November after the climb’s closure were at a record high, with around 95% occupancy booked for the first three weeks.

“The traveling public have become much more culturally mature than they were 20 years ago,” Hunt said. “Most people expect this and in fact want it to happen.”

“There’s a minority who still don’t, of course, and you always get that with any decision, but certainly our research and feedback says about 80% of people are supportive of the climb closing,” he added.

The sandstone monolith called Uluru that dominates Australia’s arid center has long been celebrated as a prized peak to conquer and a sacred site to be revered.

But the pendulum is scheduled to take a major swing away from the throngs of selfie-seekers toward the rock’s cultural significance to its traditional owners when climbing is banned later Friday.

The end of visitors enjoying the panoramic views of the incongruously flat Outback surrounds from the rock’s summit also marks indigenous Australians finding a new voice in national decision-making.

The ban has divided both indigenous Australians as well as the wider world.

The polarity of opinion has been highlighted in recent months as thousands of visitors have flocked to one of Australia’s most famous landmarks in unprecedented numbers to beat the ban.