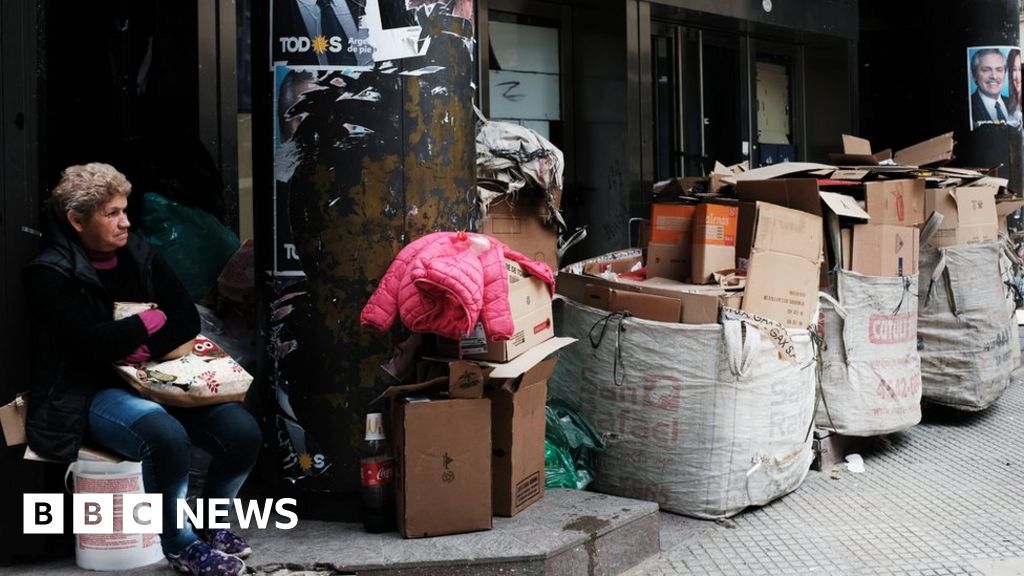 Argentina goes to the polls on Sunday to elect a new president amid a deep economic crisis that has left a third of the population in poverty.

President Mauricio Macri came to power four years ago with market-friendly promises to restore the country’s finances and growth. But many say things are worse now than when he took the reins of power from the controversial government of Cristina Fernández de Kirchner.

The conservative is running for re-election, but few believe he has any chances of winning. He was trounced in primary elections in August by Alberto Fernández, whose running mate is Ms Fernández de Kirchner (no relation).

Mr Fernández, who belongs to the populist Peronist movement, has promised to reverse Mr Macri’s liberal measures. But many fear that if he wins power, Argentina could return to the populist policies that helped push the country to its current state.

The economy will be uppermost in voters’ minds as they cast their ballots.

Who is in the running?

Six candidates are fighting for the presidency but the attention has centred on two men.

Born into a wealthy business family, Mr Macri worked in banking before going into politics – a step he partly attributes to his experience being kidnapped and held ransom by rogue police officers in 1991.

He entered Buenos Aires city politics in 2003, where his profile was helped by his presidency of Boca Juniors, one of Argentina’s most successful football clubs. He was elected mayor four years later and emerged as leader of the opposition to centre-left presidents Néstor Kirchner and Cristina Fernández de Kirchner.

As president, he promised to end corruption, lift the capital controls of his predecessor and begin major infrastructure projects. But his impressive victory in mid-term elections in 2017 came on the back of a borrowing spree.

He attempted to push through economic reforms as debts mounted. Now the crisis has wiped out much of his support.

For a career politician with little charisma, Mr Fernández has caused quite a stir since he first appeared in the limelight of Argentine politics some six months ago.

The former campaign strategist began his bid for the presidency in May – something of a surprise as ex-president Cristina Fernández de Kirchner had been widely tipped to be the centre-left opposition coalition’s candidate for the top office.

But Mr Fernández really came into his own in August when he defeated Mr Macri by nearly 15 percentage points in primary elections, a compulsory vote for all electors which is seen is a dry-run for the presidency. This victory, defying all predictions, sets him up as clear favourite.

How does the election work?

Voting is compulsory for those aged between 18 and 70. There are some 33.8 million eligible voters, who will also elect 130 members of the Chamber of Deputies and 24 of the Senate as well as some governors and the mayor of Buenos Aires.

A presidential candidate needs at least 45% of the vote or 40% and a 10-point lead over the second-place contestant to win in the first round.

If no-one achieves that, a run-off election will be held on 24 November between the first and second placed candidates.

What are the main issues?

The economy will be the main – if not the only – issue for many in a country that has suffered from years of crises in recent decades.

Mr Macri promised to achieve “zero poverty”, but things have actually worsened. Four years after he came to power, some 35% of the population – more than 15 million people – lives in poverty.

Persistently high inflation has squeezed working and middle-class families and many struggle to pay utility bills.

Based on San Luis Province

Unemployment is currently above 10%, and a growing number of Argentines have been forced to live on the streets.

Things worsened last year when the Argentine peso tumbled following a run on the currency.

After the primaries in August, the peso plunged deeper, and Mr Macri was forced to re-impose the foreign currency controls he had scrapped at the start of his presidency.

Meanwhile, the central bank sharply increased interest rates to 60% in an effort to stabilise the peso and curb inflation. This has been extremely painful for consumers and businesses that want or need to borrow.

The Macri government also turned to the International Monetary Fund (IMF) for help, asking for a record $55bn (£43bn) loan which has added to the external debt the country is unable to pay.

Going to the IMF was a highly unpopular move in Argentina, where many blame the fund for the policies that led to a severe economic crisis in 2001.