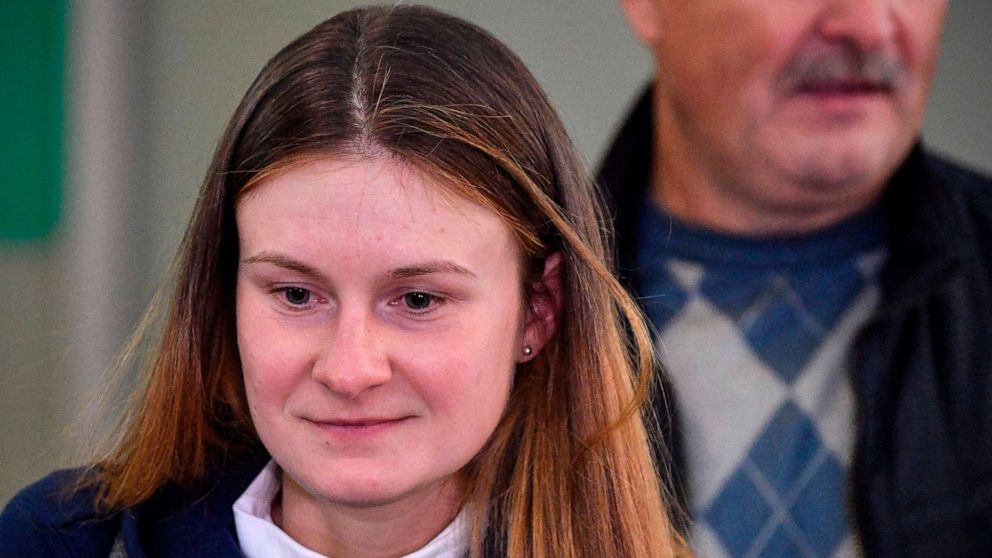 Maria Butina, who pleaded guilty to conspiring to act as a foreign agent, returned to Moscow a day after her release from a Florida prison and her deportation from the U.S.

The 30-year-old guns rights activist, accused of working to develop a covert influence operation in the U.S., received a hero’s welcome upon her return, replete with bouquets and cheering onlookers.

“Russians never surrender,” she told media members at Sheremetyevo International Airport. “I am very thankful to all who supported me, to all those Russians who helped me. I received a lot of letters, kind words, people gave money to pay for my defense. I am very grateful to the Russian Foreign Ministry and every diplomat who fought hard for me.”

Butina served more than 15 months of an 18-month sentence after her arrest in July 2018. She was released early because of good behavior.

Valery Butin, her father, read from a statement, expressing gratitude to the organizations and activists who helped petition for Maria’s release from prison.

Maria Zakharova, a spokeswoman for Russia’s Foreign Ministry, also attended, adding that Butina’s imprisonment resulted from a soured relationship between Moscow and Washington.

“She was humiliated as a human being, as a woman, as a citizen of the country which had peaceful and very friendly goals on her mind,” Zakharova told ABC News. “And the only thing she was doing was supporting bilateral relationship and friendship between peoples. … She did nothing wrong, absolutely nothing wrong.”

Butina in December pleaded guilty to one count of conspiring to act as a foreign agent and agreed to cooperate with prosecutors. Her attorneys had argued in court she was a graduate student and simply motivated to help to improve relations between the U.S. and Russia.

She was accused of infiltrating the National Rifle Association, an organization closely aligned with influential Republican politicians, in order to create a backchannel to nudge U.S. policy closer toward Russian interests.

Butina was found to have acted alongside several other people, including Alexander Torshin, a Russian official targeted with sanctions by the Treasury Department, and her boyfriend, the conservative activist Paul Erickson, who was later indicted in a separate case on allegations of wire fraud and money laundering in South Dakota.

Prosecutors argued Butina did not engage in “traditional” spycraft but worked behind the scenes to create unofficial channels of communication in political circles to promote pro-Russia policies.

In 2015, she attended a Trump campaign event and asked him if he wanted better relations with Russia. Trump responded that he would “get along very nicely with Putin.”

Russian President Vladimir Putin dismissed the charges against Butina in April, saying: “It’s not clear what she was convicted of or what crime she committed. I think it’s a prime example of ‘saving face.’ They arrested her and put the girl in jail. But there was nothing on her, so in order not to look totally stupid they gave her, fixed her up with, an 18-month sentence to show she was guilty of something.”

The Russian Ministry of Foreign Affairs also accused the U.S. of pressuring her into a false confession, adding that the charges were “absolutely ridiculous.”

Meanwhile, an investigation by Senate Democrats found that the NRA acted as a “foreign asset” by offering Russian officials access to American political organizations.

Sen. Ron Wyden, D-Ore., who published the investigation’s report a few weeks ago, alleged that the NRA may have also broken federal tax laws by using donated funds to further business interests.

Senate investigators were looking into a December 2015 visit by NRA officials to Moscow that both Butina and Torshin organized. During the trip, NRA officials met with senior Kremlin officials, according to Wyden’s report. The officials included the Russian Foreign Minister Sergei Lavrov as well as the deputy Prime Minister Dmitry Rogozin. Following the trip, Butina then brought a Russian delegation to the NRA’s annual summit.