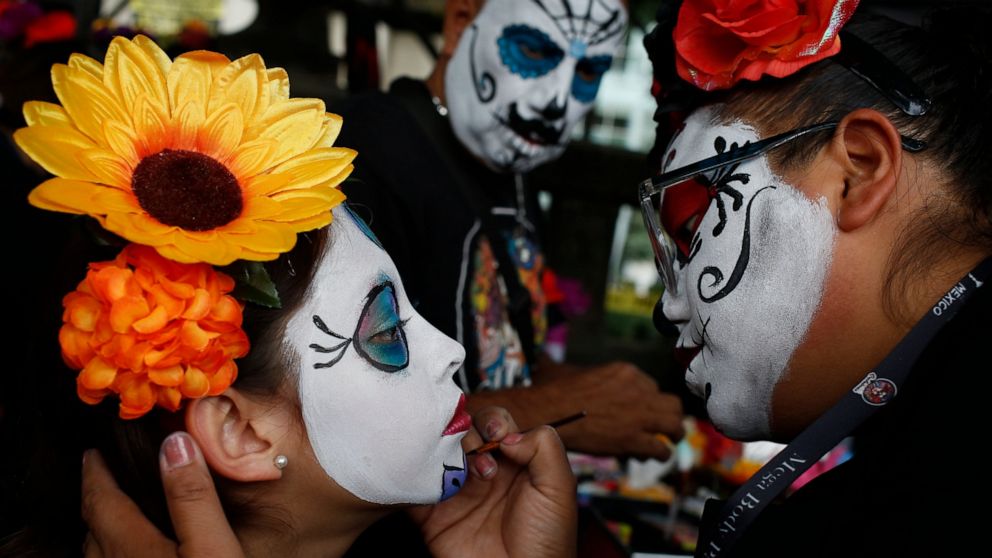 Mexicans paraded in the streets of the capital dressed as elegant skeletons Saturday as the country’s Day of the Dead festivities extend in scope and popularity.

Thousands of revelers gathered at the foot of Mexico City’s Angel of Independence statue wearing costumes and face paint to imitate the dapper Mexican skeletal figure known as “La Catrina.” Some stayed true to character, with high-necked long dresses, while others channeled figures from Mexican folklore such as mariachi crooners in metal-studded black suits, Quinceañera princesses in voluminous dresses or scorned brides left at the altar.

Skeletal images have abounded in Mexico since pre-Hispanic times. But in 1910, when Mexico was living under the exclusionary policies of dictator Porfirio Díaz , illustrator José Guadalupe Posada sketched the image of La Catrina as a tool for social satire.

She dons an oversized hat considered haute couture at a time when elite Mexican women copied Paris fashion trends and powdered their faces to appear more European. The implication was that the extravagance of a few who were accumulating vast wealth was killing others. The dictator was deposed at the start of the Mexican revolution, while the skeletal dame became etched in popular culture.

“She’s an iconic part of the death imagery of the Day of the Dead,” said R. Andrew Chesnut, a professor of Religious Studies at Virginia Commonwealth University who researches Catholic death culture.

The role of La Catrina in the holiday has been amplified by Hollywood adaptations of Day of the Dead festivities in movies such as Disney’s Coco (2017), which featured Victorian architecture in a nod to the cast-iron opulence of the Porfirian era. In another animated film, The Book of Life (2014), a character named “La Muerte,” or Lady Death, wears a giant hat and rules an underworld known as “the Land of the Remembered.”

Mexicans are mostly proud that their beloved “Dia de Muertos” traditions have gained international recognition, even if the celebration has become more commercial.

“It’s the day that we most remember the family members that have gone before us – even though I think we remember them 365 days a year,” reflected Susana Jiménez, a grandmother who turned out with braids of yarn on her head, a face painted like a skeleton and a hand-embroidered sarape on her shoulders to support a granddaughter performing a regional dance in the parade.

“This identifies us as a country, and not everyone can say the same, that they have traditions.”

Mexico’s two-day holiday to honor the dead traditionally begins Nov. 1 — All Saints’ Day on the Catholic calendar. In some indigenous communities, family members camp out overnight at their loved ones’ grave sites to pay homage.

For others, the vigils are solemn affair at home, a time for reflection. Women like Jiménez erect altars to their departed loved ones, setting out pictures and lighting candles to remember them.

In the case of Mario Díaz, 29, who celebrates the holiday for a solid month, it means setting out tequila, sugar-sprinkled bread called “Pan de Muerto” and enchiladas drenched in green salsa for his deceased godfather. Each day, he replaces the enchiladas, which were his godfather’s favorite dish, with a fresh plate.

Díaz, dressed as a rockabilly skeleton, said he’s not at all concerned that the holiday may be taking on a more commercial, and international, spirit.

“It’s fine as long as the essence isn’t lost,” he decides, glancing at the carnival-like atmosphere around him, which included drummers banging out music and children getting their faces painted.

That essence has a religious element: before the Spanish conquest, the Aztecs dedicated most of August to their goddess of death, Mictecacihuatl. As part of the Spanish repression of indigenous beliefs, the celebration was moved to coincide with Catholic holidays like All Souls Day.

Celebrant Madai Selbor took inspiration in the melding of Spanish and indigenous cultures for her costume Saturday, dressing as a skeletal La Malinche, the Nahua woman who interpreted for conquistador  Hernán Cortés , with whom she also had a child.

Selbor said that if La Malinche could see the death festivities now, “for her this would be like the children of La Malinche celebrating the union of two worlds.”