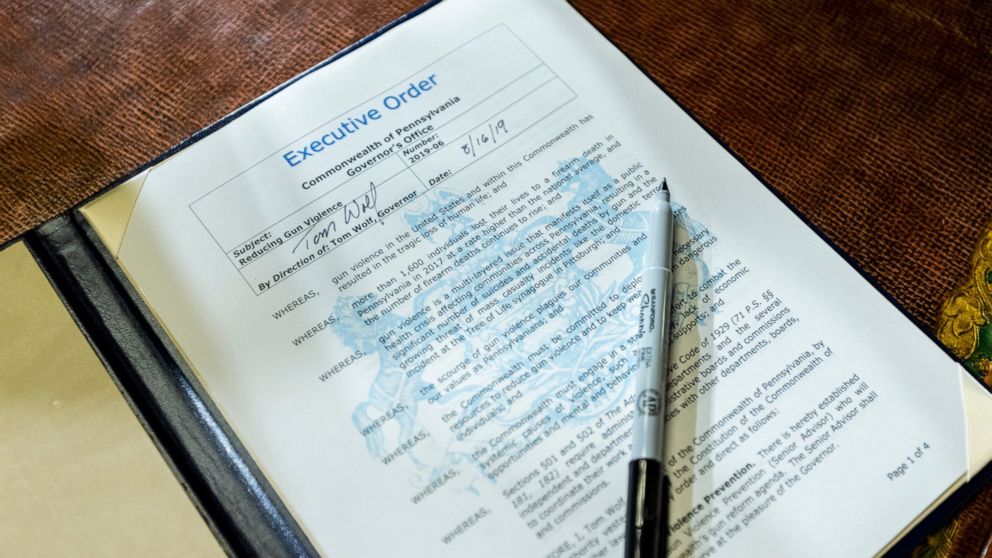 Wisconsin Democratic Gov. Tony Evers tried for months to get the Republican-controlled Legislature to take up a pair of gun control bills, holding news conferences and touting polls showing strong public support. When Republicans wouldn’t budge, Evers turned up the heat by turning to other powers of his office, using an executive order — his 54th in less than a year — to call a special session on the issue.

Evers isn’t the only frustrated Democratic governor looking for ways to get around Republican majorities firmly against their agenda. Turning to executive orders is reminiscent of the growing use of similar power by President Donald Trump, and Barack Obama before him, to accomplish their goals without lawmakers’ agreement.

In Wisconsin, North Carolina and other states, governors are getting creative to advance their agendas, with varying degrees of success. Evers’ use of his broad veto power has so angered Republicans they’ve filed a lawsuit and trying to amend the state constitution to block the governor.

Turning to executive orders “is a rational reaction by an executive who finds their agenda gummed up by a state Legislature,” said University of Wisconsin political science professor Barry Burden. To be able to show voters what they’ve accomplished, governors “start to look at things they can do unilaterally,” he said.

Evers, like past governors, largely uses executive orders for routine ceremonial purposes like honoring soldiers and police officers killed in the line of duty. But he also used them to raise a gay pride flag over the Capitol, recall Wisconsin National Guard troops sent to the southern border by his Republican predecessor and form a task force on climate change.

It’s a power play that has its limits.

Republicans greeted his order for a special session next month on guns by saying they would convene — and immediately adjourn. In North Carolina, Republicans frustrated because Cooper vetoed the two-year state budget are passing “mini-budgets” largely containing popular items and daring the governor to veto them. Cooper has signed all but one into law, giving him less room to negotiate.

In addition to executive orders, governors can impose their power through appointments, sometimes by filing lawsuits and in how they direct state agencies, Burden said. Evers, for example, has directed the Wisconsin Department of Natural Resources to make combatting climate change a priority.

He used his veto power to recast the state budget in dozens of ways, including increasing funding for schools. Republicans are now trying to scale back his veto powers through a lawsuit that the conservative-controlled Supreme Court agreed this month to hear directly and a constitutional amendment.

When it comes to enacting laws, Republican-controlled legislatures have shown little appetite for working with Democratic governors in recent years. The contrast is particularly stark in Wisconsin.

In eight years as governor, Republican Scott Walker signed an average of 179 bills a year. The last time there was divided government, in the 2007-2008 session, Democratic Gov. Jim Doyle signed 242 bills into law when Republicans controlled one chamber of the Legislature. The session before that, Doyle signed 491 bills into law even though Republicans controlled both the Senate and Assembly.

“There’s got to be more than 20 issues that are confronting Wisconsin, from small to very large,” Doyle said. “It’s obvious things aren’t getting done.”

Republican Senate Majority Leader Scott Fitzgerald said the Legislature’s role was to “play goalie” and block bad ideas coming from Evers. There’s no incentive to pass a bill that Evers is going to veto, Fitzgerald said.

Republican state Sen. Luther Olsen, who was in the Legislature when Doyle was governor, said the problem is that Evers has not built relationships with lawmakers. He predicted few bills of consequence will pass.

But he’s not worried.

“At the end of the day, the state will be just fine,” Olsen said.