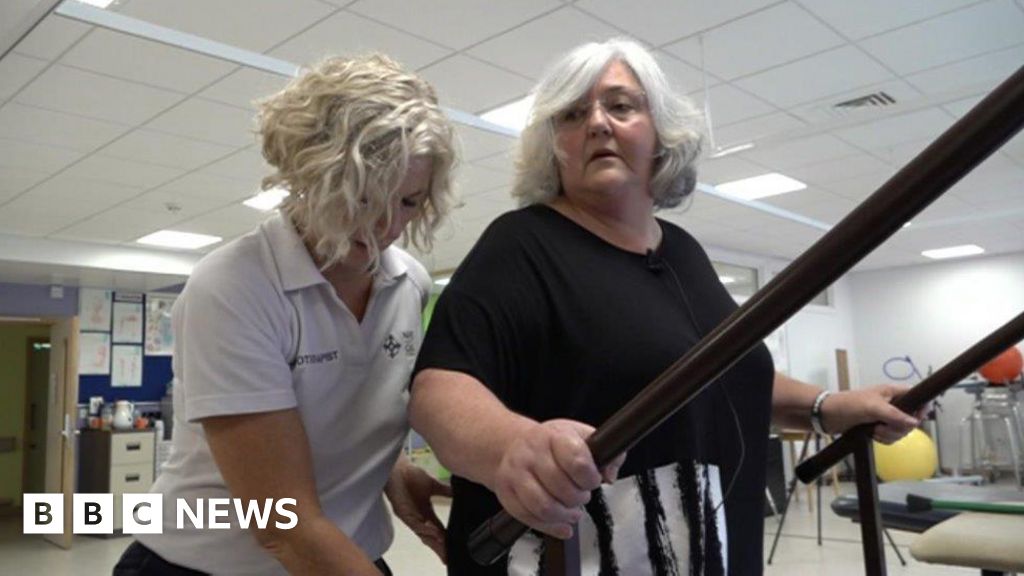 World-leading research is helping scientists find new ways of trying to help younger people who have had a stroke get back to work.

The study led by Manchester Metropolitan University found the speed a patient can walk is a major factor in determining how likely they are able to return to the workplace.

Researchers have been working with physiotherapists and patients in Wales.

It includes moving rehabilitation outdoors, including the Brecon Beacons.

It is hoped it could lead to new rehabilitation methods being developed to target younger stroke patients.

The average age to have a stroke in the UK is 72 for men and 78 for women.

But there has been a 40% worldwide rise in people under 65 who have strokes in the last decade, according to the researchers.

What does the science say?

‘You have to think about everything you do’

Nikki Tomkinson had a stroke at 53. “The world started shifting” while she was out driving in Cardiff.

“You hear people talk about life-changing illness and you don’t really know what it means,” she said.

“I couldn’t walk, sit up, eat or drink – my thinking seemed to be OK and my speech. But it’s so unknown what your future is going to be.”

It was the start of a long recovery.

“It’s tiring – it’s like revising – because you have to think about everything you do.”

Her walking was timed from the physiotherapy room back to her bed at Llandough Hospital’s stroke unit.

It went from 10 minutes to four minutes – for Ms Tomkinson a notable milestone.

The researchers said she was probably walking twice as fast as a year ago and she said she wanted to do all she could to support their work.

She worked as a civil celebrant, officiating at weddings and funerals but is still not ready to pick up her career.

“I should have 20 years of work ahead of me – at the moment I have nothing,” Ms Tomkinson added. “I try not to plan ahead too much.”

“It might not happen for me but if this [research] improves the prospect of getting people back to work, than that’s great.”

Can being outdoors help recovery?

At Talybont-on-Usk in Powys, younger stroke patients have been taken on walks near the Monmouthshire and Brecon Canal by the research team.

They want to find out if getting fresh air and setting goals can help them lead active lives again in the outdoors.

Alisdair Kirkpatrick, 53, from Abergavenny, was “as fit as I ever could be” when he had a stroke – a non-smoking, non-drinking runner and cyclist, who was taken ill after going rowing with friends.

He lost the use of his left leg and arm and some of his eyesight.

“But they say how lucky you are because you haven’t lost your memory or your voice and you’re young, 51 at the time, and very fit,” he said.

“First milestone is you want to get out of bed and be able to go to the toilet, eventually you can ditch the stick, then you want to walk further.

“Then I wanted to cycle and so I got a specially adapted trike – the first thing I did with the Stroke Association was cycle from Cardiff to Tenby. I’ve done it twice now.

“It’s about being outdoors and you can live a life again.”

Craig Williams from Neath had a stroke 18 months ago at the age of 33 – it is believed he suffered a tear to the artery in his neck while he was playing with his young daughter.

He lost mobility on his right side. “I couldn’t walk, shave, brush my teeth, simple things like that – I had trouble picking a cup up.

“I was told most of it would come back after time. I was using a stick for three months,” he said.

“I’m pretty much there, I’ve started back to work at the DVLA – and lots of walking.”

Mr Williams would prefer to steer clear of the gym, so walking outdoors is perfect.

“I couldn’t stand being in the house not being able to do anything.

“I don’t like being in the gym, I live next to a country park, so was outdoors all the time – most rehabilitation programmes are for older people so are indoors.”

Numbers of patients aged under 60

This is the first Wales-based study to be published in Stroke, the world’s leading journal.

Hannah Jarvis, from Manchester Metropolitan University’s research centre for musculoskeletal science and sports medicine, said stroke rehabilitation was very focused on older people but younger patients had specific needs – and they wanted to live as full a life as possible.

“Some of our patients just want to get outside, walking the dog. It’s also the confidence about walking in more challenging environments.”

She said returning to work was a key aim for nearly all young adults who have a stroke.

“Our research is a key stepping stone in helping to understand what needs to be done such as improving how patients are able to walk, to help more people return,” Dr Jarvis added.