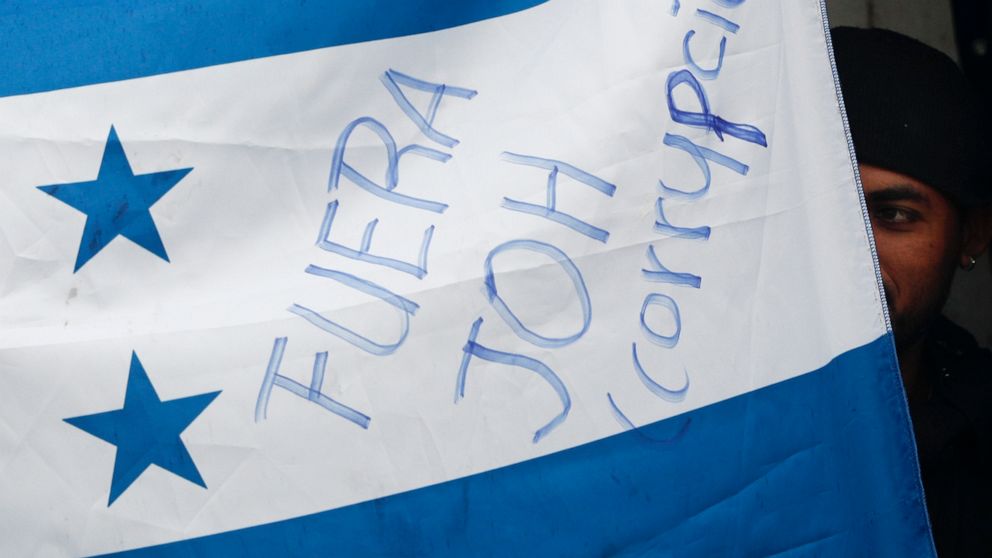 The brutal murder of an alleged Honduran drug trafficker with a potentially critical piece of evidence against the president has the Central American nation’s government pointing the finger at other drug traffickers for his death, while the man’s lawyers suggest the government may have been responsible.

A maximum security prison’s surveillance camera captured the savage killing of Nery Orlando López Sanabria Saturday morning while he stood in a hallway chatting with the prison’s director.

López — who had changed his identity to Magdaleno Meza Fúnes and once faked his own death — gained attention earlier this month when the contents of ledgers he was carrying in a secret compartment with guns, grenades and cash were made public in a New York federal courtroom at the drug trafficking trial of Juan Antonio “Tony” Hernández.

The ledgers included entries logging cocaine shipments for Hernández, a former Honduran congressman, and the initials of his brother, President Juan Orlando Hernández, who is known throughout Honduras as JOH. The president has denied any wrongdoing and has not been charged.

López’s lawyer, Carlos Chajtur, said Monday that the involvement of the Honduran government in his client’s murder “is a hypothesis that we can in no way discard because of the way in which he died.”

Chajtur had been trying unsuccessfully for a year to get his client transferred to a military base because he had received death threats. The lawyer said there had also been an attempted poisoning of his client and that a gang member transferred into the prison earlier this year was found to have secreted a grenade in his rectum that was intended to kill López.

On Sunday, deputy security secretary Luis Suazo put out another hypothesis via Twitter. He suggested that López’s lawyers had said their client would deny the authenticity of the ledgers in exchange for a transfer out of the prison and that other drug traffickers may have had him killed.

But Chajtur said Monday that was false.

The lawyer said that when you analyze the video of the death in prison of López “it’s evident that there is a plot by the penitentiary authorities and maybe higher level authorities.”

“It makes us think that there may have been direct participation by the state,” he said.

The video depicts an efficient and certain assassination that unfolds in the span of about 40 seconds.

In what appears to be a hallway of the prison, López is standing in the center speaking to two prison officials. Chajtur said the man directly in front of his client was the prison director. Another prisoner and two guards are to one side.

One guard, his face covered by a mask, walks to a red sliding door at the other side of the hall while López continues talking with the officials.

As soon as the guard slides open the door, men in white t-shirts burst in, one firing a pistol directly at López’s head.

He has time to just turn his head toward the attackers and then falls with his first step away from them. The guards and officials all scatter, along with the other prisoner. The man with the pistol moves closer to the facedown López and empties his clip into his head.

Five men accompanying the shooter brandish knives at the cowering guards and one stabs the inert López repeatedly in the back with a long knife before handing the shooter a new clip. The shooter then proceeds to empty that entire clip into López’s head while the man with the long knife hacks at his ankles. Another man then comes and stabs López in the side.

All six attackers then exit through the same door they entered, even sliding it shut.

López had been arrested June 6, 2018 on money laundering and weapons charges by military police and an antidrug unit. His vehicle had a secret compartment holding the ledgers, cash, guns, a pair of grenades and jewelry.

Several years ago, López faked his own death. Photographs circulated of López in a coffin. Local media have reported that he underwent cosmetic surgery to alter his appearance.

In June, Chajtur was in the Florida offices of the Drug Enforcement Administration. There was an open Justice Department investigation into López – also known as Meza Fúnes — and during that visit Chajtur said he was made aware that the DEA had written a letter to support an extradition request to the Honduran government.

López could have been a key witness at the Hernández trial. U.S. prosecutors put a Honduran detective on the stand who testified about the seizure of the ledgers. Chajtur said the existence of the ledgers hadn’t been made public in Honduras and it was only after U.S. authorities were tipped off and made a specific request to the Honduran government that their contents were shared.

Chajtur said Monday he doesn’t know if the extradition request was made to the Honduran government and kept quiet or if it hadn’t happened yet.

But it was made clear to him at that meeting “that the extradition request was going to come sooner rather than later.”