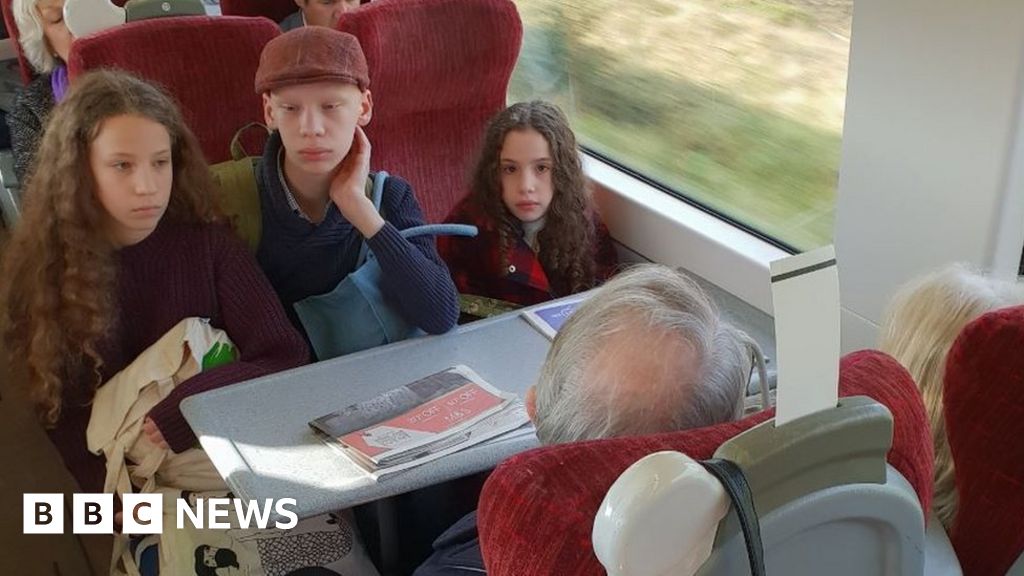 When pregnant Amanda Mancino-Williams boarded a train with her three children last week, she felt safe in the knowledge they had four seats booked.

It was the second leg of a six-hour journey, the first part of which had been spent standing.

But when Amanda and her family – with luggage for a week’s holiday – clambered through the packed carriage, they soon saw their reserved seats were partly occupied by an older couple.

“There was another gentleman sitting at the table who realised it was our seats and got up very quickly, but I could see the woman sort of whisper to her husband when she realised we were on our way.”

‘We can sit anywhere’

“I said ‘I think you’re sitting in our seats,'” Amanda recalls. “She looked at me and said ‘that’s not how it works, we can sit anywhere we want.’

Her children sat down, but she had to stand. Furious, she snapped a few photographs and posted them on Twitter.

“Had [the woman] been polite, I would have gone and found the guard to help find them seats,” Amanda says. “But I can’t be split up from my kids.”

After a quick conversation with an apologetic, but seemingly powerless, CrossCountry train conductor, Amanda and her children were upgraded to first class.

A victory of sorts, perhaps.

Yet her predicament reveals the hollow promise of advance train reservations: they are enshrined in law, and the rail industry says they are the only way to guarantee a seat.

But in practice train companies say that, when faced with peaceful protest from those unwilling to move, they often cannot enforce them.

Even the British Transport Police says it would only deploy officers to a reservation row “appropriately and proportionally” after a call from train staff.

It has left Amanda feeling as though the system risks “rewarding being a jerk”.

So what’s the point of reservations?

“When you buy online, you are encouraged to have a reservation,” he says. “The operators want you to buy in advance because they then know who is on their train.

Seat reservations are enshrined in the railway byelaws as part of the Transport Act 2000, which state no person should remain in a seat reserved by someone else unless they have permission from an “authorised person”.

That seems clear enough. But in practice, White says, conductors have an “unenviable job of trying to move somebody out of a seat if someone complains”.

“What can one person do against another person who is intransient?” he asks, adding: “The options are limited.”

Industry body the Rail Delivery Group says advance seat reservations are the only way passengers can be sure they will get a seat.

“It’s up to the train operator how they choose to enforce this,” a spokesman explains. “They can demand the reserved seats are vacated or they can relocate those who reserved the seat to other seats on the train.”

The BBC approached all train operating companies in the mainland UK that allow seat reservations. Those that responded said their priority was to de-escalate any arguments.

Some like ScotRail and CrossCountry said staff always try to find an “amicable solution” that avoids confrontation.

Others like Great Western Railway said they expect customers “to show due consideration to their fellow passengers”.

For Amanda, her tweets were not intended as an attack against the obstinate couple – “I’m sure they’re lovely, they just made the wrong decision.”

Instead, she says she wants to highlight “bad behaviour”.

“I would always try to do what is fair,” she adds. “You have nothing to lose by speaking out if you’re in the right and call people out on their behaviour.

“Hopefully they will think about it next time.”