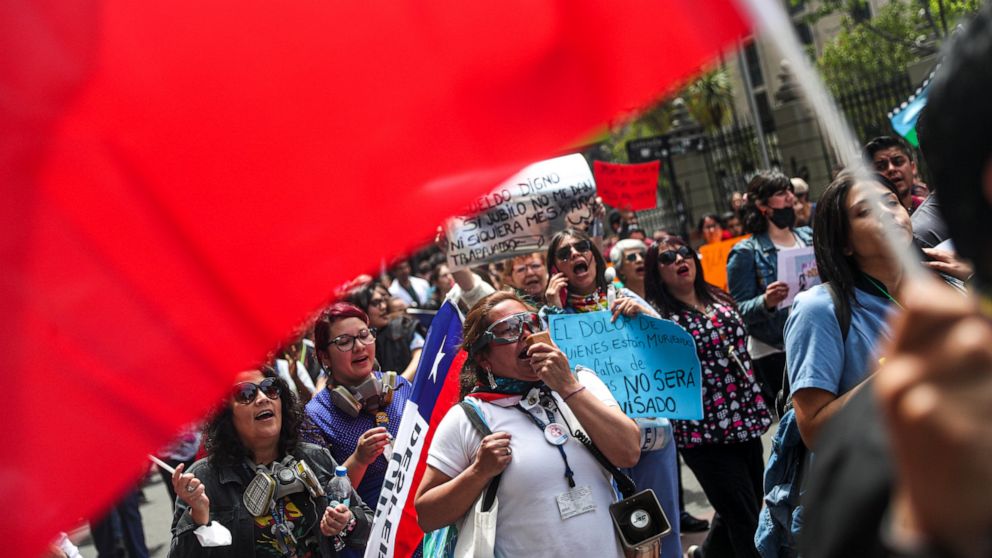 Once the fuse was lit, the anger couldn’t be contained. The spark that ignited protests in Chile was a rise in subway fares, but 12 days later the government has failed to contain the unrest and analysts agree the Chilean upheaval is about far more than a fare hike. Some protesters want better health services, others higher wages, livable pensions or improved, more accessible education; many of the complaints are rooted in the country’s inequality.

What do Chile’s protesters want?

“We are marching for health, to defend public health, for the low budget and low quality we care have … The basic salary of a nursing technician who has studied for two and a half years is about 176,000 pesos (just over $240) a month. Not even a minimum wage, that’s the truth. “

“I have protested all my life, since I started working in hospital. There are only crumbs for hospitals. I want work with a decent salary and equality for all, because you can’t say that we’re well … we are not well. We have waiting lists, people die. The sick wait so long for their operations that they die waiting.”

“We are marching against the universal nursery law because it endangers preschool education. It gives money to families so they can go to any type of nursery, private or state. With a very skimpy bonus system of 200,000 pesos (about $274) they choose their child’s nursery. This is very deceptive because no nursery costs that and the system takes away the state’s responsibility … For years we have fought for a law where the employer pays for the nursery.”

“There has to be a change in the model.”

“Before there were many times things went too far; the way to protest does not need to be destroying things. If we want the state to listen to us, it has to be peaceful because that’s how the state works and they will not accept any other way.”

The government “has to listen to what the people really want because the privatization in this country has been chilling. I can’t find another word to describe it. There are things the state could take over; for example, the AFP (pension fund), which is handled by the private sector when it would be better handled by the state. The state should also take care of health because you can’t have good or bad health depending on how much you pay. A person cannot live or die just because they pay more or less. “

“There is a lot of injustice and the government doesn’t want to listen to us.”

“I am marching for health, because it’s super bad here; for the people who die waiting to be treated; for the AFP (pensions), because they are too low, for the pensions of retirees; for the rise in fares and for the government itself…”

“The fare increase caused the glass to overflow and now people don’t want to stop, because nobody here is afraid and they are going to remain here until they see results.”

“As health students we see each day the social inequality, things they don’t show on television. Now people are being affected because they destroyed a store, because they can’t take the subway, because the police are shooting, but those are things we see in the hospital daily. Every day people are shot, people are murdered. “

“I’ve come to demonstrations since I was a teenager, but in this country demonstrators have never been heard. That is, all the measures the governments take are patches that do not end up helping anyone. They end up enriching the rich and impoverishing the poor. “

“What is happening now is something really important. We should pay attention to it. It is not just a small group who are trying to express themselves. It’s a larger group. Millions of people, throughout Chile, are saying “enough.”

“We were empowered by the vitality of the young people, the students, who dared to do it. They fear nothing; they have nothing to lose… Adults don’t dare to because we have a position to lose, a work responsibility that sustains our home; we have thousands in debts and the daily concerns we live with because we don’t have enough. I am professional and I don’t have enough. I am just beginning.”