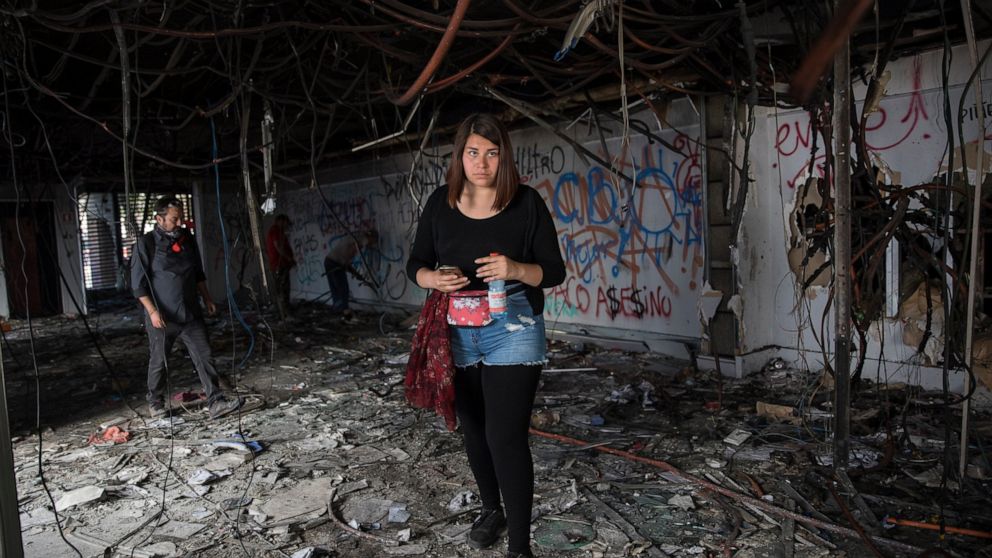 Chilean President Sebastián Piñera canceled two major international summits and said he would focus on restoring security and moving ahead in the coming days with an attempt to satisfy popular demands for better social services and a lower cost of living.

Thirteen days into a wave of protests that has left more than a dozen people dead, hundreds injured and businesses and infrastructure damaged, the streets of Santiago were mostly calm on Wednesday night after Piñera’s announcement. A few thousand people protested outside the presidential palace.

It was unclear if the relative tranquility would continue Thursday, the first day in a long holiday weekend in Chile.

The decision to call off the Asia-Pacific Economic Cooperation and U.N. global climate gatherings, planned for November and December, respectively, dealt a major blow to Chile’s image as a regional oasis of stability and economic development.

But leaders across Chile’s political spectrum, and protesters on the streets Wednesday, mostly said they accepted Piñera’s decision, although many lamented cancelling the climate summit. Chile has moved faster than many South American countries to reduce carbon emissions, and activists and politicians alike had high hopes for the summit.

“This has been a very difficult decision that causes us great pain,” Piñera said in a televised address. “A president always has to put the needs of his countrymen first.”

Piñera said he was forced to cancel both events due to the chaos unleashed by 12 days of protests. Demonstrators are demanding greater economic equality and better public services in a country long seen as an economic success story. Shops have been vandalized and buildings set on fire, shutting down numerous subway stations.

Heraldo Muñoz, president of Chile’s opposition Party for Democracy, said he thought it was unfortunate the climate summit was canceled.

“On the other hand, the desire to hold the meeting wasn’t realistic,” he said. “We have to focus on domestic affairs.”

Some demonstrators said they agreed with Piñera’s decision.

Trade and climate negotiators scrambled to find new locations for their summits, aimed at resolving tariff-related conflicts between China and the U.S. and finalizing countries’ climate rules in advance of a bigger summit next year during which governments will be asked to commit to new emissions limits.

President Donald Trump and Chinese President Xi Jinping had hoped to sign a modest trade agreement at the APEC summit, formerly scheduled to take place in Santiago on Nov. 16-17. Under the tentative deal, the U.S. had agreed to suspend plans to raise tariffs on $250 billion in Chinese imports, and Beijing had agreed to step up purchases of U.S. farm products.

White House spokesman Hogan Gidley said U.S. officials were “awaiting potential information regarding another location,” but it was unclear if any had been proposed. Gidley added that Trump wanted to sign the deal with China “within the same time frame,” hinting that a separate event could occur outside a summit.

The so-called Phase One trade agreement did little to address the underlying U.S. grievances against China, including its alleged practice of forcing foreign firms to hand over trade secrets, stealing technology, and unfairly subsidizing Chinese firms. China’s leaders have been reluctant to make the kind of policy reforms that would satisfy Washington, worrying such concessions would mean scaling back their aspirations to become a world leader in advanced technologies such as artificial intelligence and driverless cars.

Still, the apparent cancellation of the summit “removes a hard deadline for action toward a comprehensive agreement in the trade war,” said Jeff Moon, a former U.S. diplomat and trade official specializing in China who is now president of the China Moon Strategies consultancy. “That hard deadline and the relatively short period of time available allowed Trump and Xi to give themselves permission to do only easy things and delay indefinitely resolving tough issues.”

Now, Moon said, “there is no excuse for not pressing forward with the full U.S. agenda of concerns.”

Climate advocates said they were disappointed but expected to relocate their talks.

“I’ve been making my way through the North American continent towards Santiago, but as #COP25 will be moved I will now wait until I have more information,” tweeted teen climate activist Greta Thunberg.

The Santiago climate conference was meant to work out some of the remaining unresolved rules for countries on climate efforts, smoothing the way for the bigger effort in the 2020 summit: encouraging countries to up their commitments to cutting climate-changing emissions.

“The absence of rules does not stop countries from acting either alone or together” to cut emissions, said Nigel Purvis, a climate and environment negotiator in the administrations of Presidents Bill Clinton and George W. Bush. “It really shouldn’t slow down climate action.”

But other climate experts said it was important to get those rules worked out in advance.

“To load everything into one conference — I think they’ll work pretty hard not to do that,” said Henry Jacoby, a climate expert at the Massachusetts Institute of Technology.

Rachel Cleetus, policy director at the Union of Concerned Scientists, said she believed there would be “every effort made that some type of … meeting does happen.”

U.N. Climate Change Executive Secretary Patricia Espinosa issued a statement saying “alternative hosting options” were being explored. And a U.N. official, speaking on condition of anonymity for lack of authorization to comment publicly, said that all U.N. venues are being considered as options. Those would include cities such as New York, Geneva, Bonn, Vienna and Nairobi.