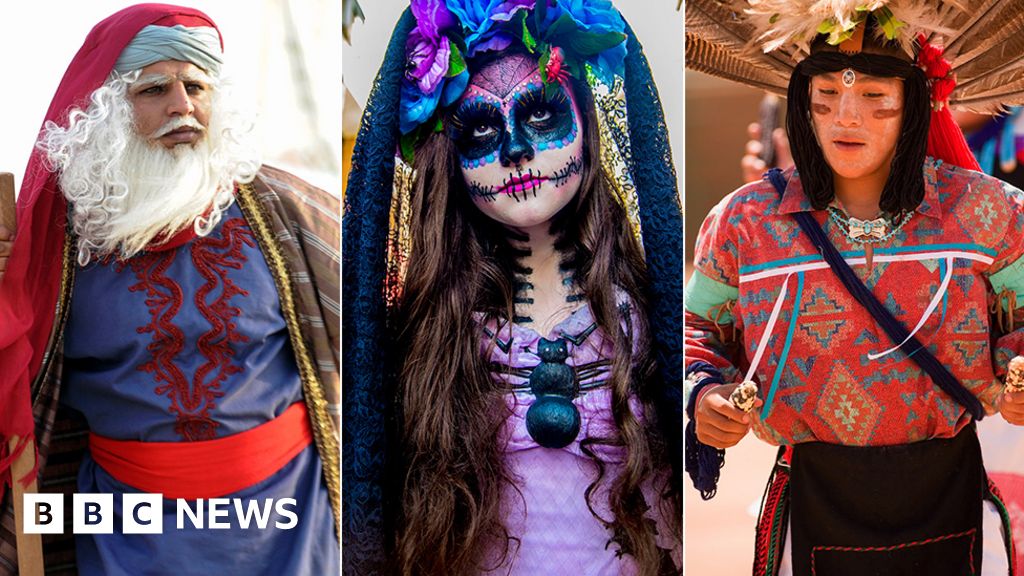 Halloween is here and, with it, the pressure to have an original costume.

Gone are the days of dressing as a witch or pumpkin, now it’s all about showing off how savvy your pop-culture knowledge is.

But we’re also living in a time where outrage is only a click away, and the potential for outfits to offend is higher than ever.

For example, it’s been claimed that Hannibal Lecter costumes mock mental illness, Day of the Dead outfits are cultural appropriation and politically-themed costumes always have the potential to spark arguments.

“Historically people have always dressed up in costumes which refer to Britain’s place as the centre of the empire and this has dated right back to the early 19th century.”

“So there was a time when people would dress up as Turks, it was seen as a lavish thing to do.”

But now, Royce thinks our appetite for what’s acceptable fancy dress is changing.

“I really think in the past five/six years, with the rise of social media, you’ve got people objecting and voicing their concerns about people … wearing indigenous clothes or not being respectful of cultures.”

Instead he believes “people know what’s acceptable and what’s not, they’re very aware, particularly those on social media.”

“But whether they care or not, is down to their social circle. Social circles which are predominantly white and not worried or too concerned about how they’re perceived seem more relaxed.”

Royce tells Newsbeat about some of the times public figures got dressing up wrong.

“Several photos of Justin Trudeau blacking up came out recently, they were taken before his political career, but this did not go down well.”

“Scott Disick once dressed up an Arab Sheik and this was also seen as cultural appropriation.”

There are several definitions of cultural appropriation, but Royce describes it as “cherry picking bits of a culture your country once ruled.”

“If you’re from a culture or country that has a history of invading other countries and you decide you want to use the fashions of people your country has invaded, as a form of entertainment, that would be cultural appropriation.”

Luckily for you, we’ve come up with some politically sound fancy dress ideas so you don’t have to.

Of course Halloween costumes are typically ‘scary’. So why not go as the nation’s favourite villain, Killing Eve’s Villanelle?

And if you’re teaming up with a mate, they can go as her enemy – sort of, it’s a complicated relationship – Eve Polastri.

For Villanelle, all you’ll need is a big, fluffy-jacket and some fake blood for the face.

Not only is it effective, but cheap too.

All you’ll need is a black bob wig, green t-shirt and a huge frown.

Speaking of cheap and cheerful but also topical, dressing as fake news could be a woke option.

That is, providing you incorporate pages from multiple papers in your outfit.

The story of the year

Whilst on the subject of news, dressing as the story that got people talking most in 2019 could be an idea.

And no, it’s not Brexit. It’s Rooney vs Vardy.

Shortly after footballers wife Coleen Rooney claimed someone using Rebekah Vardy’s Instagram account leaked stories about her to a tabloid newspaper, she was renamed WAGatha Christie.

We’re not exactly sure what a WAGatha Christie costume involves – you could channel your inner detective, or like Kieran, dress as the actual Instagram leak.

Even more so when someone invades the runway.

Dressing up as that scary moment is very 2019.

But will you find somewhere to park your pony?

Rummage around in your granddad’s wardrobe and you might find yourself all the bits you need for a convincing Peaky Blinders costume.

Except the horse. If you find a horse in there, you might want to have a word with your nan.