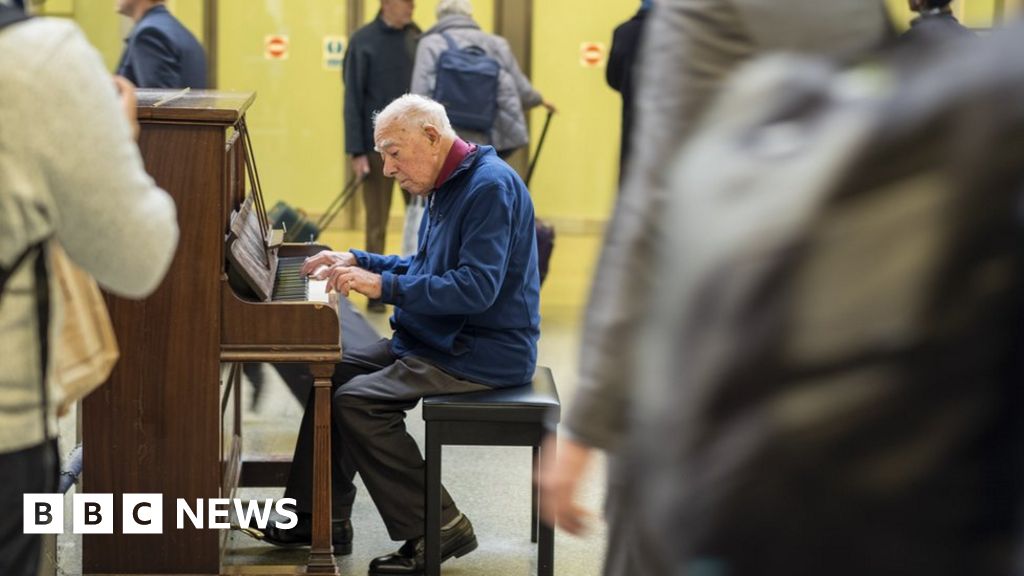 The sound of someone tinkling the ivories has become commonplace at UK railway stations. But who plays them, what is their appeal and how did the trend take hold?

Every Monday and Friday, Denis Robinson, 92, makes the 30-minute trip from his home in Sutton, south London, to St Pancras International station, in the heart of the capital.

His final destination: an upright piano tucked beneath a staircase on the station concourse, opposite the arrivals door where holidaymakers from across the world depart the high-speed Eurostar train.

Denis is one of Britain’s amateur train station pianists. A minor celebrity, following a viral performance of Somewhere Over the Rainbow with West End singer Ceili O’Connor in April, he has been delighting commuters with his own arrangements of nostalgic hits for seven years.

He aims to arrive at the piano stool either side of lunch. Breaking with tradition to meet BBC News mid-week, he takes his pew by 11:30am on a Wednesday.

Within moments of his opening chord, passing travellers pause to listen, smile and offer him praise.

“It’s an absolute joy,” says the retired auditor, who has been playing since he was a child. “I nearly always come home with a memory to tell my wife.

“I’m lucky because I’ve got an ever-changing appreciative audience.”

Denis suffered a stroke at the station in August, which affected his left hand, but it wasn’t long until he returned to the instrument in autumn for a rendition of As Long as He Needs Me, sung softly to himself.

“When I walked round to the piano again, there was just this feeling of ‘I’m back’,” he says.

There are two pianos at St Pancras, located at either end of the station’s main arcade of shops. Denis credits his wife of 34 years, Diane, for introducing him to the one he plays.

She was studying Greek at the nearby British Library when it was donated to St Pancras in 2012, following a three-week art project that placed so-called street pianos at public locations around London.

While Sheffield is often cited as the home of the first street piano, the idea for the St Pancras pianos was the brainchild of British artist Luke Jerram, whose Play Me, I’m Yours project has been touring cities around the world since 2008.

The scheme sees second-hand pianos installed in public locations, with an open invitation to play. Each piano is unique, often decorated by local artists or community groups.

“I realised within a city, there must be hundreds of invisible communities, regularly spending time with one another in silence,” Luke explains.

“Placing a piano into the space was my solution to this problem, acting as a catalyst for conversation.”

Several other pianos that were placed in London train stations in 2012 also ended up staying put after Luke’s project ended, including two at Canary Wharf and one at Herne Hill railway station.

And it’s not just talented amateurs that have taken to the keys. Global stars such as Sara Bareilles and Sir Elton John, who donated a Yamaha piano to St Pancras in 2016, have also given public performances.

Inspired by the success of the St Pancras pianos, other groups have gone on to install their own at railway stations around the country.

There are now at least 34 pianos available to play on station concourses.

Labour MP for Hove Peter Kyle lobbied for a piano at Brighton station in 2014 in the hope that it would “reduce the misery” of time spent at the terminal.

Ten months later, with the go ahead from Southern Rail, the station’s first piano arrived from local dealer Brighton Piano Warehouse, painted in circus-style red and yellow with “Please Play Me” emblazoned above the lid.

While the instrument has been replaced twice due to wear and tear, a piano has been at the station ever since.

Brighton and Hove Council street cleaner Mikah Laiberg, 28, has made a regular appearance at the instrument from the outset – at one point rehearsing on it every day after work.

“It’s a compulsion,” he says. “I can’t understand how people who can play an instrument can walk past without playing it.”

Clips shared online show Mikah, in his employee high-vis jacket and boots, stunning passers-by with his classical improvisations influenced by composers such as Alexei Stanchinsky.

Such videos, of everyday people showcasing their talent, have arguably played a key role in the success of public pianos.

Street pianos emerged around the same time as the smartphone – the first iPhone was released in 2007 – making performances increasingly easy to document and share.

In August, Alicia Palmer, 16, wowed the internet with her rendition of Adelweiss at Tottenham Court Road’s piano alongside public piano player Brendan Kavanagh – gaining more than 750,000 views on the site.

Selhurst is one of several small stations in London with a public piano.

Hannah Sayers, 34, and her local community group arranged for a piano to be placed there in 2018.

Donated by Hannah’s neighbour and painted by a local resident, they hoped it would “help people feel positive about where they live”.

“We wanted to bring life and colour to our little ward in Croydon,” Hannah says.

Selhurst’s piano is conveniently located near to the BRIT school, for performing arts students to play, and has a large passing traffic of commuters and Crystal Palace football fans.

“The one thing we were really worried about was that it would get damaged or vandalised,” adds Hannah, “But it hasn’t been so far.”

Local resident Linda Watson calls it a “community asset”. She adds: “Thornton Heath has many brilliant musicians. To have live music when you are travelling is a delightful surprise.”

Meanwhile for Malcolm Ingram, of Ingram’s Removals, placing a piano in Darlington Bank Top station was a way to save an unwanted instrument.

Pianos, once the entertainment hub of the family home, have long been in decline.

Some 5,000 are sold annually, the Financial Times reports, compared with 30,000 in the 1980s. Malcolm says customers are frequently looking to get rid of their old pianos.

In 2018, he had a brainwave and arranged for a client’s Hemingway piano to be relocated to the station concourse, where it is now loved by staff and passengers.

“A piano brightens up peoples’ day – if someone has the gift to play it, it provides that feel-good factor,” he says.

“The piano was just going to have to go to landfill otherwise, which seems criminal.”

Speaking at the end of his performance in St Pancras, Denis says his repertoire of old-time classics are a constant hit with audiences.

“The songs bring back memories for some people, so they come over and say thank you,” he says.

“The music I play, it’s simple really. It’s a blessing to see that I can provide happiness.”