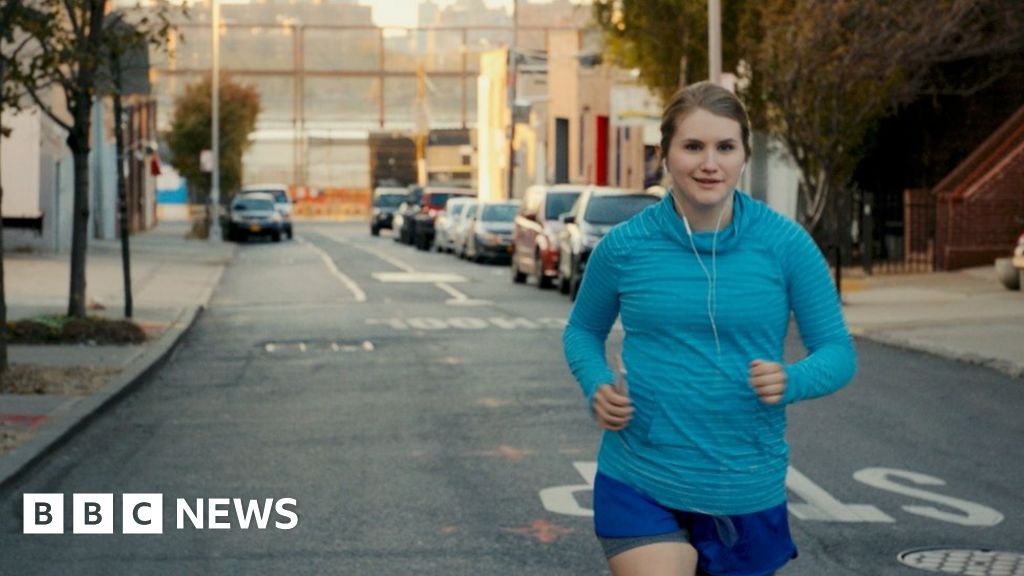 In an era of body positivity, the film Brittany Runs A Marathon would, on paper, seem completely off message.

Stripped back, it’s a story of a plus-sized, shambolic young woman, who embarks on an extreme health kick, loses a shed load of weight and finally finds happiness in her new self.

Add that it’s a comedy, when body image can for many people – especially women – be no laughing matter, and you could think the director had scored a massive own goal.

But appearances are deceptive.

Using them as a barometer to judge others and yourself is wrong-footed. And on full examination, it’s this that lies at the heart of the tale.

Brittany, played by comedy actress Jillian Bell, is in free fall. Once full of promise, she’s now lost in low self-esteem and self-neglect. She succumbs to the “fat sidekick” stereotype, especially with her manipulative, narcissistic flatmate Gretchen. And to men, she’s easy prey for instant sexual gratification.

It’s a visit to the doctor that brings a bitter prescription for Brittany: Shake up and shape up or risk serious consequences.

“She’s raw, funny, but troubled,” Bell tells BBC News. “Many of her struggles are the same as I’ve been through. I had messed up ideas about weight loss and how I would be treated.

“Here, it’s about putting yourself first. That beauty comes in all body types. Often in transformation films, a woman loses weight and life is perfect. But there’s real emotional struggle in finding out how to set your own values.”

Brittany wakes from her stupor, turning to running as her solution – with the ultimate goal of the New York marathon.

Yet, like that epic feat, her journey is riddled with potholes, the deepest being the increasing obsession with her weight loss and how society treats her more kindly as a result.

Finding an equilibrium and learning to like herself on her own terms, at whatever weight, then becomes as important as the marathon – and a marathon in itself.

Most reviewers have praised the film, including Rolling Stones’ Peter Travers who describes it as “a fun ride, spiked with touching gravity… When you cheer at the end – and you will – the laughs and tears feel honest and richly earned”.

He described Bell, who has previously appeared in 22 Jump Street, as a “comic force of nature”.

To understand her character’s trials fully, Bell lost 29lbs before filming and another 11 during. She also took up running.

Her regime was, like Brittany’s, strict, “exhilarating and very lonely. I was not having much of a social life. It was sort of all consuming,” she says.

Psychology professor Kerstin Blomquist approves of the film’s message but calls out Brittany’s extreme diet. “Brittany stops eating foods she likes or she eats only lettuce for lunch… These are not the messages we want to send. Eating pizza or ice cream is not bad,” she says.

Bell recalls how even when filming had wrapped, she still felt the the scrutiny of a judgemental society.

“I had people say things that, if I hadn’t been in a better headspace then, would have been more damaging. A close guy friend said that [thinner] was the way I should be.

“And someone in the industry said, ‘I hope you’re getting laid right now with the body you have’. It’s terrible to equate happiness and my sexual life to weight.”

“It would have been weird for a male director to be like, ‘Hey, we’re doing this movie about women’s bodies, can you lose 40 lbs?’ I was going to have our character be wherever Jillian was as a human.

“We didn’t want to give any view point on weight, the focus was empowerment and personal triumph and to lean into the uncomfortable truth that the world treats you differently based on how you look. Is it a body positive film? I’d call it a life positive film.”

The story is based on the real experiences of Colaizzo’s friend Brittany O’Neill. She had a good job yet her personal life was going south. But she pulled off a “triumph of personal change” and going for her first run was the catalyst.

If Colaizzo chose to make a comedy from some pretty serious issues it was largely down to the real Brittany, who is “just the funniest person I’ve ever met”, he explains.

And if his screen Brittany is overweight, again it’s because she’s inspired by the real life version. But there was also the deeper intention of turning stereotypes on their head.

“There’s this archetype of the funny fat comic relief. Brittany feels like she has to fill that role. Humour is a great tool for deflection. We’re asking audiences not to objectify. I wanted to show the pain and pathos and that she no longer wants to be that person, but in a way that’s still funny,” says Colaizzo.

In fact, a number of the characters are not quite what they seem. They include Brittany’s new running friend, the previously loathed “sorted” neighbour Catherine who has hidden trauma.

While the nightmare (now former) flatmate is revealed as just as big a bag of insecurity as Brittany.

“You have to weed out those people who are not making you feel good and are depleting your energy,” muses Bell.

But as Brittany’s state of mind deteriorates, she pushes away those who are truly trying to help. And, as many will have experienced, she has to hit rock bottom to be jolted back up by a second life-changing wake-up call.

Some commentators have expressed disquiet over the film’s handling of Brittany’s mental decline. Writing in the New York Times, Teo Bugbe acknowledges the film’s focus on health not shape, but adds “there’s no suggestion that her mental health might benefit from the same attention given to her physical health”.

Bell says the message is definitely there, increasing in strength over the course of film, in direct correlation with the confusion in Brittany’s head.

“It’s a layered thing but it hits home in what has been the hardest thing I’ve ever had to shoot,” she says of the pivotal “wake-up” moment when Brittany herself suddenly becomes a “fat shamer”.

“You’re being asked to feel for the woman who becomes the victim of Brittany’s wrath but also feel for her who is in so much pain.

“She’s worked on her outside but not her head. She realises she’s been going about things the wrong way. It’s a coming of age story – taking responsibility for herself,” says Bell.

Bell says ultimately making the movie has amounted to much more than a career move.

“When I finished I thought, ‘Okay, I did that for Brittany and now I want to do things for myself’. I ended up cutting my hair really short and I gained about 20 lbs and I thought, ‘I like this; this is where I feel more myself. I had a deep look at how I was treating myself and how I want to be better and kinder.”

She launched the hashtag #IGotALottaBodies, asking people to celebrate their bodies along with her, and posted Instagram pictures of herself at various sizes.

She still has moments of acute anxiety, “feeling like I’m falling out of nowhere”, but knows to talk it through with someone she trusts.

“You have to replant the seeds that society has been telling women for years about beauty and body type,” she says.

“Your weight can’t be the most interesting thing about you and there are more important things you can be doing with your life.”