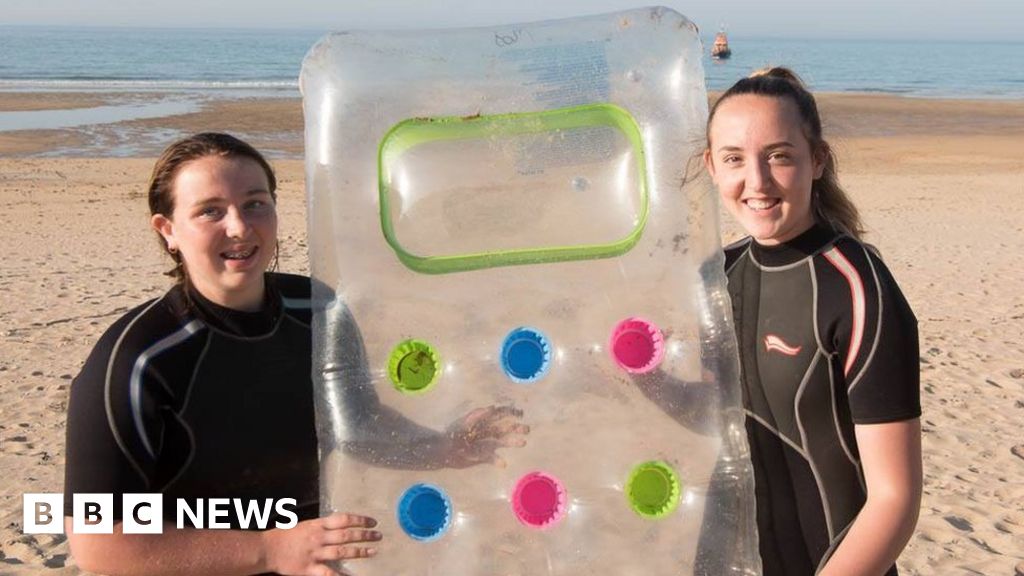 Two schoolgirls credited with saving a man and his young son from drowning off the Aberdeenshire coast are to be honoured for their bravery.

Isla Noble, 15, ferried the pair to shore using a lilo off Fraserburgh while her sister Eilidh, 14, called the emergency services.

The holidaymaker, known only as Phil from Newcastle, passed out during the drama but was otherwise unharmed.

The Royal Humane Society is to honour the teenage pair.

The Fraserburgh Academy pupils were enjoying some time in the water after school at the Waters of Philorth nature reserve in August when they heard cries for help.

The man had his son – believed to be aged four – on his shoulders, but was exhausted and out of his depth.

Isla swam out to them, put the child on the airbed and helped Phil lie across the inflatable, while her sister went back to fetch her phone.

Another rescuer, Keith Gray – who was picnicking with his family – joined Isla to help push the airbed back to shore.

Isla is to receive the Royal Humane Society Testimonial on Vellum, which is awarded where someone has “put themselves in considerable danger” to save someone else.

Eilidh and Mr Gray have been awarded a Testimonial on Parchment.

Off-duty nurse Sophie Ross, who was walking her dogs on the beach when the drama took place, is to receive a Certificate of Commendation for providing first aid.

Andrew Chapman, secretary of the Royal Humane Society, described the sisters as “the right people in the right place at the right time”.

He said: “They realised that the man and his son were in serious danger and didn’t hesitate to go to their aid.

“The beach at Fraserburgh is known for dangerous rip tides, but Isla ignored any danger to herself to swim out to the man and child.

“Eilidh went into the water after her, realising that the airbed would be of enormous assistance, and then kept a cool head and called the emergency services.

“Keith Gray and Sophie Ross also played important roles in preventing what could have turned into a double fatality.”

Mr Chapman added: “There was some superb team-work here and all four of them richly deserve the awards they are to receive.”

No date has yet been fixed for presentation of the awards.

The rescued holidaymaker later presented the sisters with a box of “Heroes” chocolates.

He gave his teenage rescuers a handwritten note from his children, thanking them for saving their father and brother.

It read: “For the heroes that saved our father and brother, many, many thanks for being so courageous, nothing is big enough to thank you, but this is just a tiny token of our appreciation.”