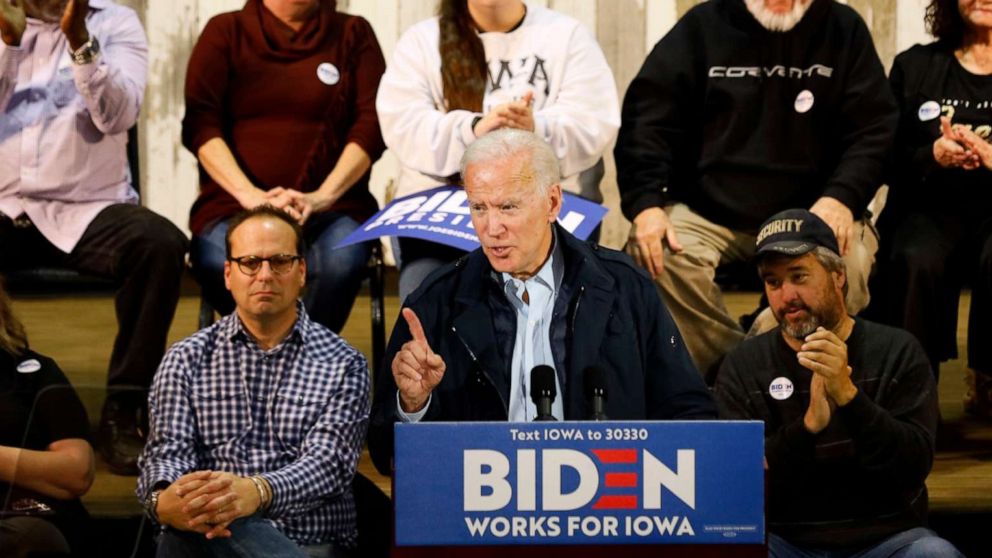 These three continue to lead current preferences for the Democratic presidential nomination, with 27% support for Biden, 21% for Warren and 19% for Sanders among Democrats and Democratic-leaning independents in a new ABC News/Washington Post poll.

South Bend, Ind. Mayor Pete Buttigieg now emerges one rung down, with 7% support, displacing California Sen. Kamala Harris. She’s gone from 11% in July to 7% in September and 2% in this survey, produced for ABC News by Langer Research Associates. 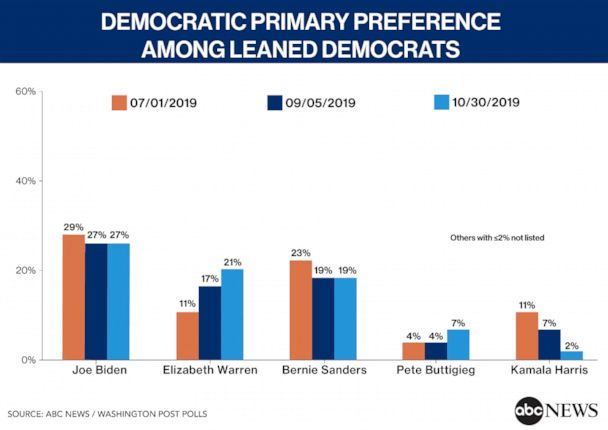 Those standings reflect a new high for Warren in ABC/Post polls; she had 11% support in July and 17% in September. Support for Biden and Sanders has been essentially stable across this period, with no losses for either but likewise no forward momentum.

Results are quite similar among registered voters (and there’s ample time to register) – Biden with 28% support, Warren 23%, Sanders 17% and Buttigieg 9% (up from 4% in September). Each of the 12 remaining candidates receives 1% or 2% support, at most.

Current standings are not predictive; there’s plenty of room for movement. Indeed about half of leaned Democrats, 53%, either say they’d consider another candidate (47%) or have no current preference (6%).

Warren’s supporters are not highly committed; 65% say they’d consider someone else. That compares with 43% among Biden’s supporters and 50% among supporters of all other candidates combined. (The sample size of Sanders supporters is too small to dice.)

Who might their second choices be? Current Biden supporters divide chiefly between Sanders (31%) and Warren (26%) as their fallback preference, with 8% apiece for Harris and Minnesota Sen. Amy Klobuchar and 7% for Buttigieg. Warren voters go more for Sanders (36%) than Biden (17%) as their second choice, with 11% each for Harris and Buttigieg and 6% for former Housing and Urban Development Secretary Julián Castro.

Among all leaned Democrats who support someone other than Biden or Warren, second choice preferences divide between Biden, 24% and Warren, 23%, with all others in the single digits.

In terms of candidate attributes, perhaps most seriously, given his Oct. 1 heart attack, leaned Democrats divide about evenly, 48-45%, on whether or not Sanders, 78, is in good enough overall health to serve as president. That’s a stark contrast to both Biden, age 76, seen as in good enough health by 74%, and Warren, age 70, seen as healthy by 80%.

Younger adults, who are among Sanders’ strongest supporters, are most apt to think he’s in good enough health to serve – six in 10 18- to 39-year-olds say so. Just 40% of those age 40 and older agree. 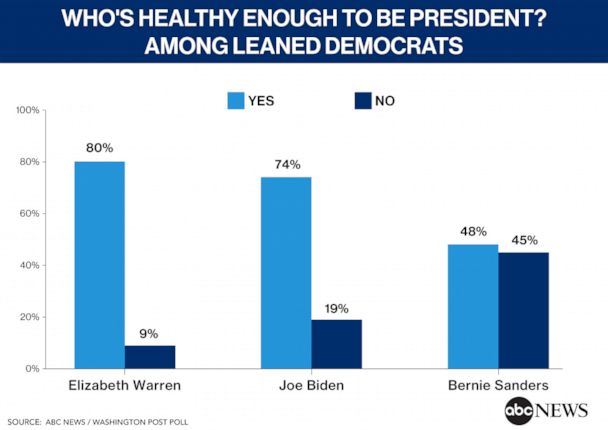 Several other attributes differentiate the candidates. Forty-two percent of leaned Democrats think Biden has the best chance to defeat Donald Trump in the general election, over Warren, Sanders, Buttigieg and Harris. Seventeen percent pick Warren and 16% Sanders. Biden also is ahead in being seen as the strongest leader in the group, 35-19-20%.

Thirty percent see Sanders as best understanding the problems of people like them; 22% say that about Biden, 20% for Warren. Sanders and Biden are about even in being seen as most honest, 27-26%; 16% pick Warren on this attribute.

In terms of having the sharpest mental ability, 24% select Warren, about as many select 21% Biden, 17% say Sanders and 15% say Buttigieg. And Biden, Warren and Sanders run quite closely on being closest to you on the issues and being likeliest to bring needed change to Washington. 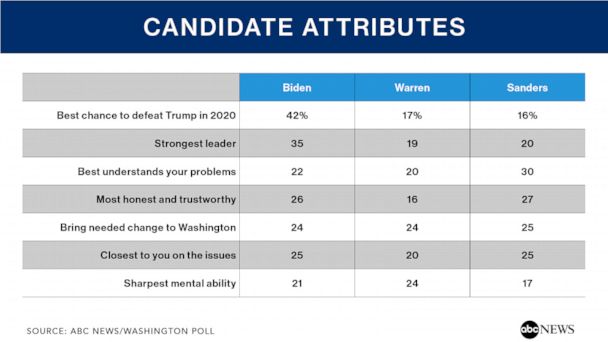 There also are differences in the candidates’ support profiles. Ideology is an example; Warren does best among liberals, with 31% support, compared with 18% among moderates. Biden leads among moderates.

Warren is weaker among independents compared with her support from mainline Democrats, potentially a factor in open primaries.

There are sizable gender gaps in support for Warren and Sanders alike; Warren’s support nearly doubles among women compared with men, while Sanders’ does the same among men compared with women. By race/ethnicity, Biden does best with black voters, with 39% support, a group in which Sanders remains quite weak.

Biden does best with older leaned Democrats, Sanders with younger ones. And Warren does well with college graduates. 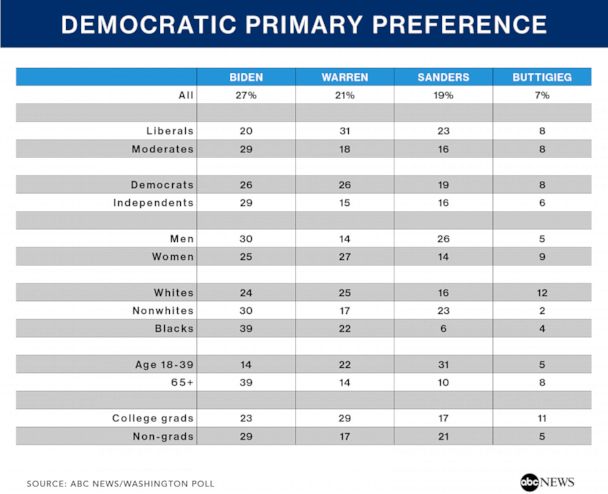 With the first voting in Iowa three months away, there are myriad ways these group and personal attribute differences may play out. All that’s certain in primaries is that nothing is certain until the public more fully tunes in, the candidates make their cases and the voting begins.

This ABC News/Washington Post poll was conducted by landline and cellular telephone Oct. 27-30, 2019, in English and Spanish, among a random national sample of 1,003 adults. Results have a margin of sampling error of 5.5 points, including the design effect, for the sample of 452 Democrats and Democratic-leaning independents covered in this report. Partisan divisions in the full sample are 29-23-38%, Democrats-Republicans-independents.

The survey was produced for ABC News by Langer Research Associates of New York, N.Y., with sampling and data collection by Abt Associates of Rockville, Md. See details on the survey’s methodology here.