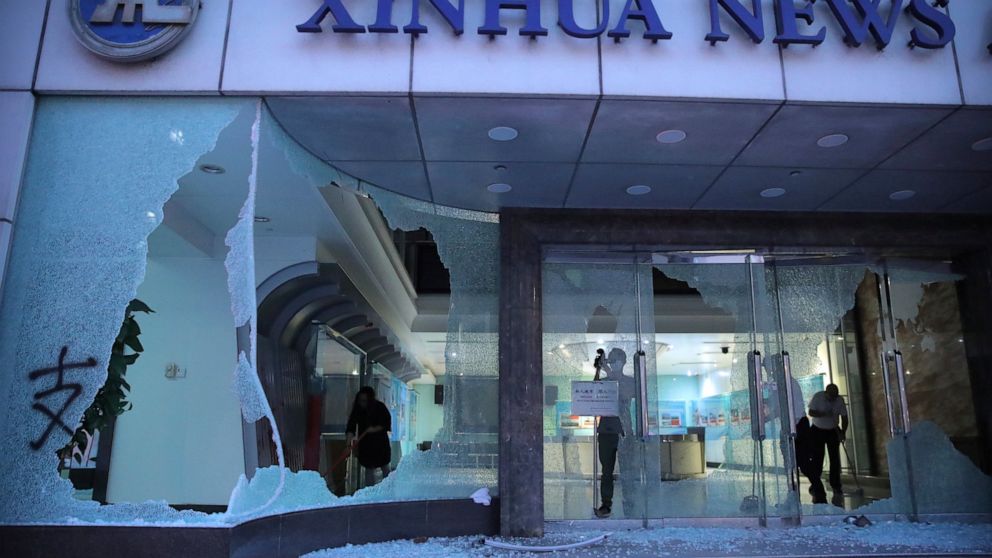 China’s state-owned Xinhua News Agency denounced the attack on its office in Hong Kong by pro-democracy protesters as “barbaric” during a melee that marked nearly five months of unrest in the Chinese territory.

More protests are being planned in seven districts Sunday in a sustained push for political reform and genuine autonomy, after the ruling Communist Party vowed to tighten the grip on one of the world’s freest financial hubs.

Xinhua in a brief statement late Saturday strongly condemned the “barbaric acts of mobs” that had vandalized and set fire to the lobby of its Asia-Pacific office building in the city’s Wan Chai neighborhood.

The Hong Kong Journalists Association also deplored “any act of sabotage against the media” and called for an end to violence against the press.

It was the first strike against the official Chinese news agency in a show of anger against Beijing, which many in the city fear is infringing on the freedoms guaranteed to Hong Kong when the former British colony returned to Chinese control in 1997.

On Friday, the Communist Party in Beijing vowed to “establish and strengthen a legal system and enforcement mechanism” to prevent foreign powers from sowing acts of “separatism, subversion, infiltration and sabotage” in Hong Kong.

Hong Kong, which has a separate legal system from mainland China, has tried to enact anti-subversion legislation before but failed amid public opposition. Beijing may be indicating it is preparing to take matters into its own hands by having the National People’s Congress — a ceremonial legislature — issue a legal interpretation to enact such legislation.

Hong Kong’s government said Sunday its Chief Executive Carrie Lam, currently in Shanghai, will head to Beijing on Tuesday. She is due to hold talks with Vice Premier Han Zheng and join a meeting on the development of the Greater Bay Area that aims to link Hong Kong, Macau and nine other cities in southern China.

Protesters have frequently targeted Chinese banks and businesses. In July, demonstrators threw eggs at China’s liaison office in Hong Kong and defaced the Chinese national emblem in a move slammed by Beijing as a direct challenge to its authority.

Police said that more than 200 people were detained during Saturday’s protests in multiple areas on Hong Kong Island and Kowloon district. This included five youths found with 188 gasoline bombs, pepper sprays and protest gear such as helmets and goggles.

Senior police official Yeung Yiu-Chung said the four men and one woman, aged between 19 and 24, were detained in a residential building in Wan Chai. Police are investigating if there was an organization or mastermind behind them, he added.

A bomb disposal robot was used to detonate two suspicious parcels on different roads late Saturday, said a police spokesman, who declined to be named as he wasn’t authorized to speak to the media.

After police stymied an unauthorized rally with tear gas and water cannons, groups of hardcore protesters regrouped with gasoline bombs and attacked shops and subway exits. Police responded in street battles late into the night in familiar scenes that had besieged the financial hub since June.

The protests were sparked by a now-shelved plan to allow extraditions to mainland China but have since swelled into a movement seeking other demands, including direct elections for the city’s leaders and an independent inquiry into police conduct. Lam last month invoked emergency powers to impose a face mask ban that further enraged protesters for crimping their right to assemble.

More than 3,000 people have been detained and the city has slipped into recession for the first time in a decade as it grapples with the turmoil and the impact from the U.S.-China trade war.