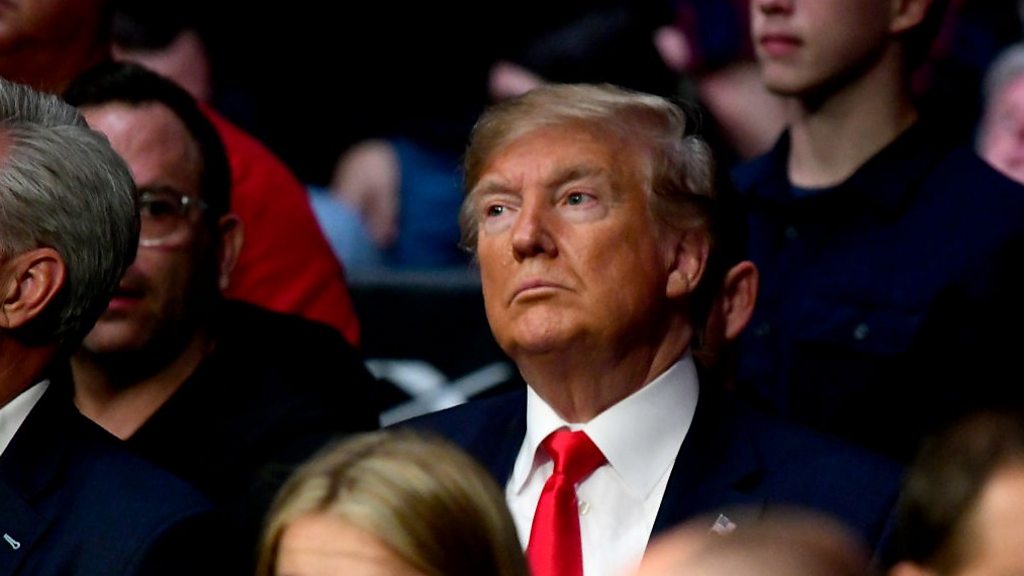 Donald Trump was met with raucous boos – and some cheers – on Saturday as he attended the Ultimate Fighting Championship (UFC) in New York.

The US president attended the Mixed Martial Arts (MMA) event with high-ranking Republicans and his sons, Donald Trump Jr. and Eric Trump.

A small anti-Trump protest was held at the Madison Square Garden arena.

It comes less than a week after the president was booed at the baseball World Series in Washington DC.

Chants of “lock him up” echoed around the stadium earlier in the week – a reference to a chant sometimes heard at Mr Trump’s political rallies, which calls for the imprisonment of his former presidential rival Hilary Clinton.

The reception was mixed on Saturday night, however, with cheers and clapping heard from some spectators, and boos and profanities from others.

Signs reading “Remove Trump” and “Impeach Trump” were also spotted in the crowd.

As video of the crowd spread on social media, his son Donald Jr hit back on Twitter, saying the reception had been “overwhelmingly positive” and that UFC President Dana White – a long-time friend of the president’s – had called it “the most electrifying entrance he’s seen in 25 years”.

UFC, or the Ultimate Fighting Championship, is an American MMA promotion company. Its first mixed martial arts event was held in 1993.

From humble beginnings, it now boasts millions of fans worldwide and has produced superstar fighters like Conor McGregor and Ronda Rousey.

Mr Trump hosted UFC events decades ago, when the sport was shunned by most venues and mainstream media.

“I would never say anything negative about Donald Trump because he was there when other people weren’t,” said Dana White, who spoke at the 2016 Republican National Convention in support of Mr Trump’s presidential campaign.