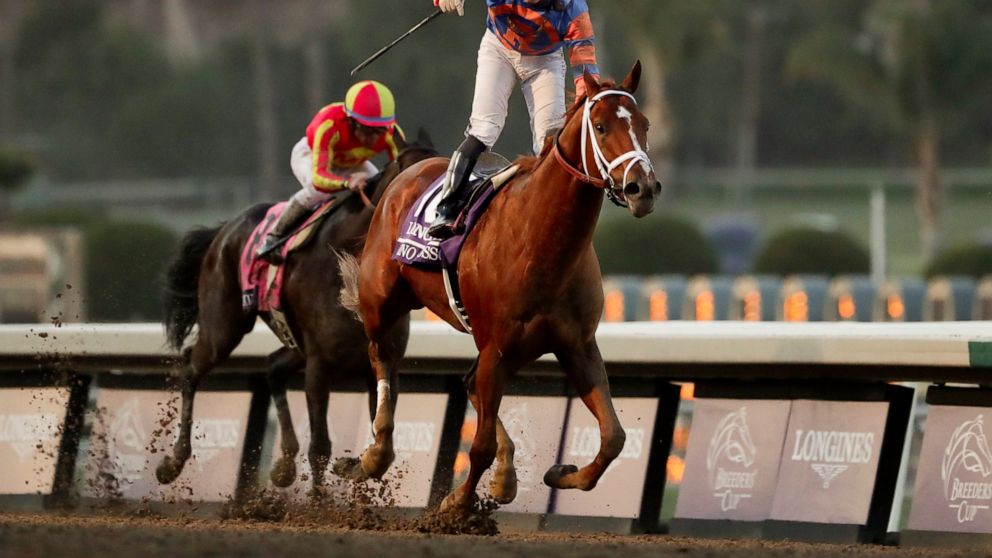 A victory by Vino Rosso in the Breeders’ Cup Classic was overshadowed by a fatal injury to a 15-1 long shot in the $6 million race at Santa Anita on Saturday night.

Cup officials said in a statement about two hours after the race that Mongolian Groom had been euthanized after sustaining a serious fracture to his left hind leg.

It’s the 37th horse death at Santa Anita since December and it occurred in the season-ending championships in front of 67,811 fans and a national prime-time television audience.

Mongolian Groom was part of the early pace in the 1 1/4-mile race. But jockey Abel Cedillo sharply pulled up the 4-year-old gelding near the eighth pole as the rest of the field charged toward the finish line.

Vino Rosso won by 4 1/4 lengths, drawing away from 5-2 favorite McKinzie down the stretch.

The deaths prompted track owner The Stronach Group to implement changes to rules involving medication and training. The Breeders’ Cup also beefed up its own pre-race exams and observations of runners.

It almost worked, too, with the only injury coming in the last of the 14 Cup races over the two days of racing.

“Everything had been going so great,” trainer Bob Baffert said before the death was announced. “You just don’t know when it is going to happen. We try to keep them as safe as we can.”

A green screen was rushed onto the track to block Mongolian Groom from the view of 67,811 fans and a prime-time television audience. He was loaded onto an equine ambulance and taken to a hospital on the backstretch.

Four veterinarians were consulted before the decision was recommended to euthanize.

Cup officials said they have hired Dr. Larry Bramlage to conduct an independent evaluation with the results to be made public when completed.

Mongolian Groom had three wins in 17 career starts and earnings of $579,141. He was coming off a victory over McKinzie in the Awesome Again Stakes on the same track in September that earned him a berth in the Classic.

Mike Repole, winning co-owner of Vino Rosso, said before the death that an injury is “the worst part of this game.”

Winning trainer Todd Pletcher said he was concerned about horse safety at Santa Anita coming into the season-ending world championships.

“We were anxious, not only for running in huge races like this, but hoping everything would go smoothly and safely,” he said. “Everyone took every precautionary measure they possibly could.”

However, that wasn’t enough in the view of People for the Ethical Treatment of Animals.

“The racing industry must make a choice between doing right by the horses or shutting down forever,” said Kathy Guillermo, PETA senior vice president.

Four horses were scratched Saturday from Cup races after pre-race exams by vets found issues concerning enough to keep them in their barns.

Earlier in the day, protesters angered by the 36 deaths stood outside Santa Anita toting signs urging the end of the sport in California. A short distance away, industry workers feeling pressured by the prospect of losing their jobs rallied to promote racing.

It’s not the first time death has haunted the Breeders’ Cup.

In 1990 at Belmont Park, Go For Wand was leading the Distaff when she sustained a fatal injury and fell in front of a horrified grandstand crowd and live TV audience. Jockey Randy Romero was thrown to the ground and Go For Wand got up and limped on three legs. She was euthanized on the track.

In the 2007 Classic at New Jersey’s Monmouth Park, George Washington dislocated his ankle during the Classic and was euthanized.

Before tragedy struck it had been a day of upsets and thrilling performances at the sun-splashed track located at the foot of the San Gabriel Mountains.

Heading into the Classic, Vino Rosso went off at 9-2 odds for Pletcher, who won the race for the first time.

“It’s one thing that was missing,” Pletcher said. “It feels great.”

Higher Power was third and Elate, a 5-year-old mare taking on the boys, finished fourth.

Trainer Chad Brown won a leading three Cup races over the two days to move into a second-place tie for career victories with Baffert at 15.

Ireland’s Joseph O’Brien made history. At 26, he became the youngest trainer to win a Cup race with Iridessa’s neck victory in the $2 million Filly & Mare Turf. He beat his father, Aidan, who saddled Just Wonderful to a fifth-place finish.

Joseph O’Brien also joined Freddie Head as the only person to train and ride a Cup winner. O’Brien won the 2011 Turf with St Nicholas Abbey before eventually growing too tall to remain a jockey.

Iridessa earned the only European victory of the weekend.

The weekend’s biggest shocker occurred in the $2 million Juvenile on Friday. Storm the Court won by a neck. He paid $93.80 at 45-1 odds, the highest payout in the race’s 35-year history.

In other races Saturday:

— Bricks and Mortar won the $4 million Turf by a head to complete a perfect season and move solidly into contention for Horse of the Year honors. He’s 6 for 6 this season and has won seven in a row dating to last year.

— Covfefe won the $1 million Filly & Mare Sprint by three-quarters of a length.

— Blue Prize rallied from second-to-last on the backstretch to win the $2 million Distaff by 1 1/2 lengths, upsetting even-money favorite Midnight Bisou, who lost for the first time in eight races this year.