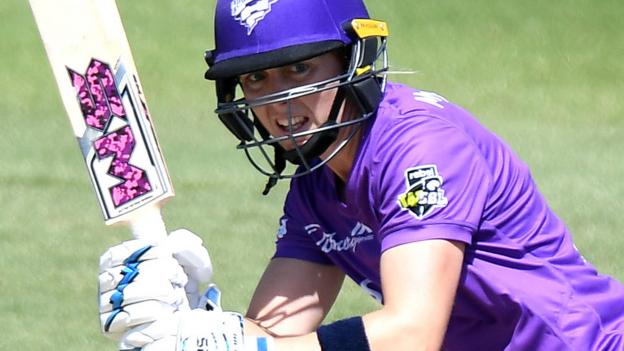 Australia’s Alyssa Healy and Ellyse Perry shared the highest partnership in Women’s Big Bash League history as they put on an unbroken 199.

Perry is the WBBL’s leading run-scorer since it began in 2015, while Healy has scored two centuries this season.

She hit nine fours and two sixes as the Hurricanes posted 148-6 against Sydney Thunder at West Park Oval.

However, 50 from New Zealand’s Rachel Priest anchored Thunder, who overhauled the target with four wickets in hand and 11 balls remaining.

England’s Fran Wilson made six for the Hurricanes.

Listen to commentary on a range of games from the Women’s Big Bash League on BBC Radio 5 Live Sports Extra. More details.

BBC Sport has launched #ChangeTheGame to showcase female athletes in a way they never have been before. Through more live women’s sport available to watch across the BBC in 2019, complemented by our journalism, we are aiming to turn up the volume on women’s sport and alter perceptions. Find out more here.