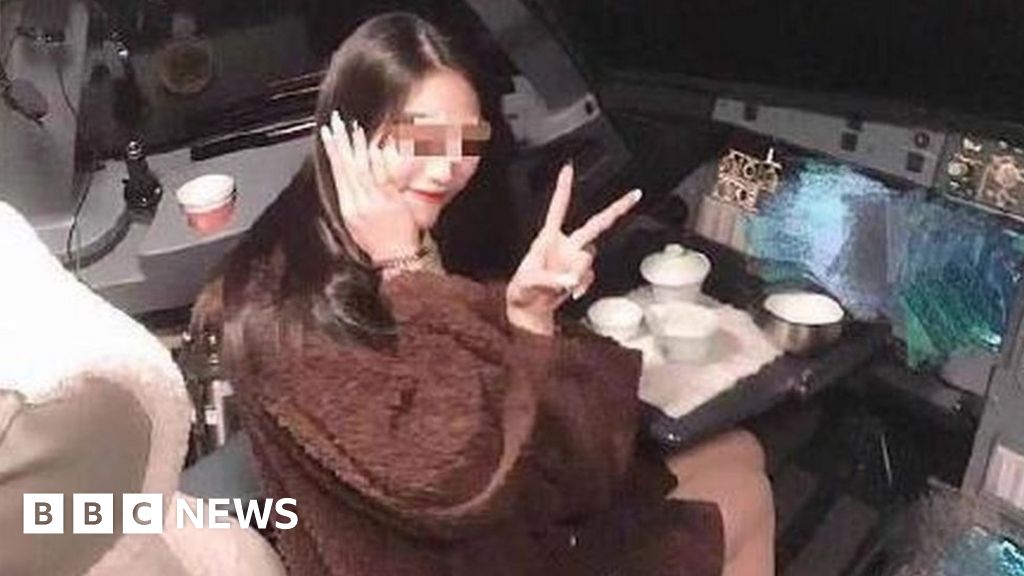 A Chinese pilot has been banned from flying after a photo went viral showing a female passenger in the cockpit.

The photo was taken in January on an Air Guilin flight from Guilin city to Yangzhou city, state media said, but was widely shared this week – causing the airline to take action.

It shows a woman posing in the cockpit with refreshments laid out next to her.

Air Guilin said in a statement the pilot had violated air safety regulations.

‘Thanks to the captain’

The incident took place on 4 January on flight GT1011 from Guilin city to Yangzhou city, according to state media outlet The Global Times.

But it was brought to the airline’s attention on Sunday after screenshots of the alleged passenger’s post started being shared widely on micro-blogging site Weibo.

The post showed the woman making a V sign with her fingers – a popular pose in China – with the photo captioned: “Thanks to the captain. So happy.”

The woman is rumoured to be a flight attendant in training at a Guilin university, according to news site Chinese News Service.

Air Guilin did not specify if the photo was taken mid-flight, but Chinese pilots and analysts said the photo appears to have been taken during the flight.

The pilot, who was not named, has been banned from flying for life, though it is unclear if he was fired from all roles by the airline.

Air Guilin said in a statement that he had “violated [regulations] by allowing irrelevant personnel into the cockpit”.

According to the Civil Aviation Administration of China, passengers are not allowed to enter the cockpit without special approval or under “necessary” circumstances.

Other staff members involved in the incident have also been “suspended indefinitely” while further investigations are held.

“Passengers’ safety is always Air Guilin’s priority. We take a zero-tolerance approach against any inappropriate and unprofessional behaviour that might risk the aviation safety,” the Chinese carrier said.

Last year, Chinese carrier Donghai Airlines suspended a pilot for six months and revoked his qualifications as a flight instructor after he allowed his wife to go inside the cockpit.