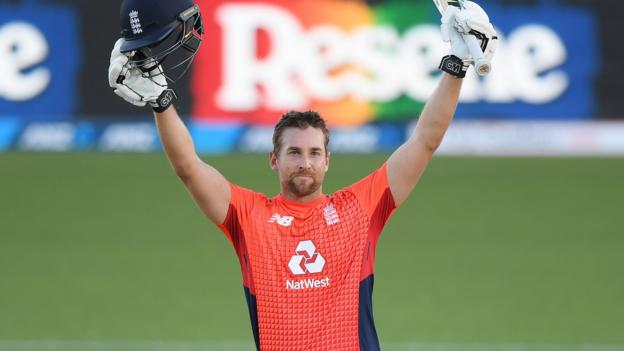 Dawid Malan hit the fastest T20 century by an England batsman as the tourists crushed New Zealand by 76 runs in Napier to level the five-match series with one game remaining.

On an astonishing night, Malan struck 103 from 51 balls to become the second England player to make a T20 ton.

Captain Eoin Morgan made 91 from just 41 balls as England posted their highest T20 total of 241-3.

Leg-spinner Matt Parkinson took 4-47 as New Zealand were dismissed for 165.

The final match takes place in Auckland on Sunday at 01:00 GMT.

Alex Hales is the only other England international to make a T20 century, having made an unbeaten 116 from 64 balls against Sri Lanka in 2014.

New Zealand could not match England’s hitting as they were dismissed with 19 balls remaining, with all five of England’s bowlers claiming at least one wicket.

England were 18-1 in the early stages of the match but that was a distant memory by the time Morgan was dismissed in the final over.

Napier might be a small ground but Morgan and Malan produced a stunning display of hitting to power England to their match-winning total.

No bowler was allowed to settle. Leg-spinner Ish Sodhi had his final over smashed for 28 by Malan while Blair Tickner, so economical in the third T20, was taken for 50 from his four overs.

The two came together in the eighth over and Morgan showed his intent as he dispatched his sixth ball for six. Helped by New Zealand’s poor discipline, the two plundered the bowling – Morgan hit straight while Malan went square.

They never looked troubled, their hard hitting allowing the ball to evade the fielders. Malan’s half-century came from 31 balls, while Morgan’s, brought up just three balls after Malan, was from 21. From there, the pace only accelerated.

Dot balls were a rarity in the final few overs as Malan moved smoothly towards his century. His sixth six of the evening, brought up off New Zealand’s premier bowler Trent Boult, took him to a superb century.

It looked as though Morgan would match him as he swiped the third ball of the final over for six, but he holed out in the deep to fall nine runs short.

The England captain had said at the toss that he would have bowled first. As he left the field, he may have been relieved that the decision was taken out of his hands.

New Zealand had the chance to clinch a series victory and, having dismissed Jonny Bairstow cheaply and trapped Tom Banton lbw just as his innings began to fire after opting to bowl, they were in a strong position.

However, their discipline crumbled as Malan and Morgan attacked, with even the returning Boult unable to stop the boundaries from flowing.

They made a frenetic start with the bat, racing to 49-0 inside the first four overs as Martin Guptill hit Chris Jordan out of the ground, but the innings stuttered along.

Only five players reached double figures and stand-in captain Tim Southee was the top-scorer as he hit out from the number eight spot.

England’s fielding was not at its best, with Pat Brown dropping two chances off Parkinson, but ultimately it was enough to take the series into a deciding match.

England batsman Dawid Malan, speaking to Sky Sports: “It’s not often in your career everything comes off, it was a lot of fun out there.

“I felt rusty in the first game of the series but it’s felt smoother and smoother. I said this morning that I felt I had got rid of the rust and thankfully it clicked here.

“Morgs came out and changed the momentum of the game and I piggy-backed that.”

England bowler Steven Finn on Test Match Special: “It was a professional performance from England. They managed to turn the screw when needed.

“Dawid Malan takes pride in being able to pace his innings, judge who to attack and when to attack them and he did that really well today.”

England captain Eoin Morgan: “It was quite a clinical performance. Myself and Dawid have played for a long time together at Middlesex and we know each other pretty well.

“It was enjoyable, we had a lot of laughs out there. It was a beautiful wicket to bat on.”

New Zealand stand-in captain Tim Southee: “That can happen in Twenty20 cricket, in two days time we’ve got another chance to go out and win the series.

“You have to go out and believe when you’re chasing a target like that, we got off to a good start but whenever we looked like getting away they took wickets.”