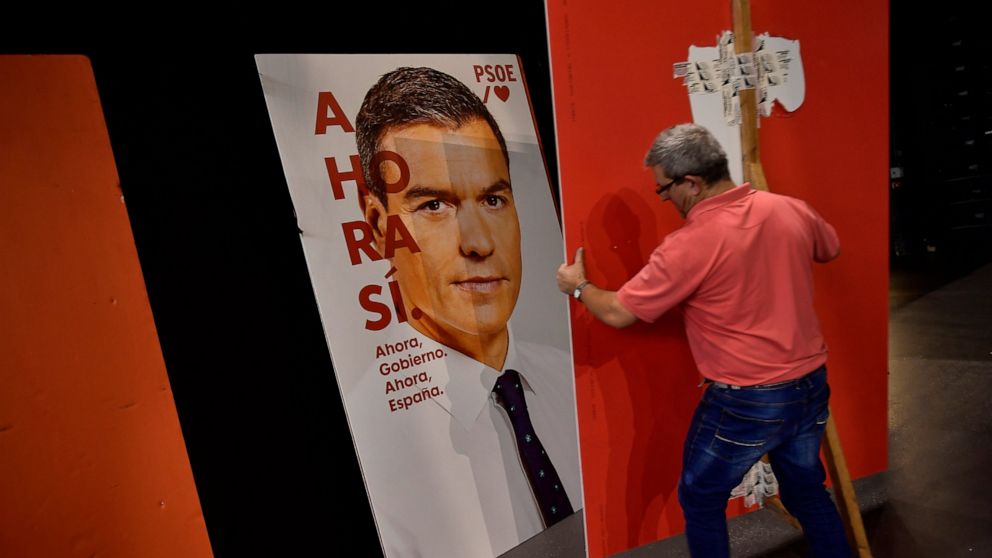 Spain is holding its fourth general election in as many years — and the second this year — amid voter distrust and a renewed Catalan independence bid that has bolstered the far right.

The first obstacle for whoever wins Sunday’s vote will be to overcome the country’s increasingly fragmented and polarized politics to build a parliamentary majority to back his government.

That could prove difficult. Pedro Sánchez’s Socialists appear poised to again win the most seats in Parliament, but fewer even than they won in April, when Sánchez was unable to get the support of his left-wing rivals to keep his party in power.

Sánchez is up against five other men for the job as prime minister. In recent days, he has tried to lure undecided and centrist voters by saying he will focus his next term on economic issues and by toughening his stand on Catalan separatists.

His efforts come as support for the conservative Popular Party and the far-right Vox is growing following massive protests in Catalonia last month, when nine leaders of its separatist movement were sentenced to prison for the wealthy’s region attempt to break away two years ago.

In trying to appeal to Spaniards frustrated by the secession attempt, Sánchez has promised to bring back prison terms for those who hold banned referenda for independence, overturning a previous Socialist position.

“I will not allow another extreme nationalist outbreak, fueled by false narratives and replete with lies, to undermine the success of Spanish democracy,” the 47-year-old leader wrote in a commentary published this week in several European newspapers.

But political analyst Pablo Simón, a professor at Carlos III University, says the context of the election makes it even harder to win over voters.

“The public opinion is angry at the electoral repeat, with record levels of discontent toward the political class and great pessimism over how the economy will perform next year,” he said.

Even if Sánchez succeeds in rallying support from the anti-austerity United We Can and its new splinter, More Country, a Socialist cabinet likely will need either the backing of small regional parties or for the right-wing opposition to abstain.

The eurozone’s No. 4 economy has been functioning without a stable government since mid-2018, when Sánchez ousted the graft-tainted conservatives in a parliamentary confidence vote. The center-left minority government then crumbled in less than a year after losing the parliamentary support of regionalist parties.

Sánchez’s Socialists went from 85 to 123 seats in the late April election. But he needed support from an absolute majority, or 176 of 350 lawmakers, and a falling out with United We Can leader Pablo Iglesias left him without enough votes.

The latest polls show both of those left-wing parties could lose ground.

The Popular Party, meanwhile, is recovering after losing more than half of its parliamentary representation in April, falling to 66 seats. Polls show the conservatives could win more seats in this election. But leader Pablo Casado’s chances to form government are lower than Sánchez’s, given that the party’s natural ally, the center-right Citizens, isn’t expected to do well.

The party benefiting most so far from the Catalan crisis has been Vox, with its mix of Spanish nationalism and populism.

In addition to calling for deposing Catalonia of its self-government powers and outlawing regional separatist parties, Vox has stepped up its anti-immigration rhetoric. The party has released campaign videos linking migrants with criminality, and its leaders have held rallies outside centers where authorities care for unaccompanied teenage migrants.

Vox won 24 seats in April, less than what polls had predicted but still an unprecedented victory for the far right, which had been on the fringes of the political mainstream since the end of Gen. Francisco Franco’s dictatorship in 1975. This time, surveys predict Vox will win at least 40 seats in the Congress of Deputies.

The party now supports minority coalition governments of the Popular Party and Citizens in the regions of Madrid, Andalusia and Murcia, and its support was key for many other local governments, said Bonnie Field, a professor on Global Studies at Bentley University.

“If the right parties pulled out a surprise victory on Sunday, this arrangement would certainly be on the table,” Field said.

Turnout is expected to be low in Sunday’s election, something that generally has benefited right-wing parties. But she noted that the Socialists succeeded in mobilizing voters in April by stirring the “fear of the radical right and the possibility of a rightwing government that depended on them.”

“We’ll have to see if that works again,” she added.