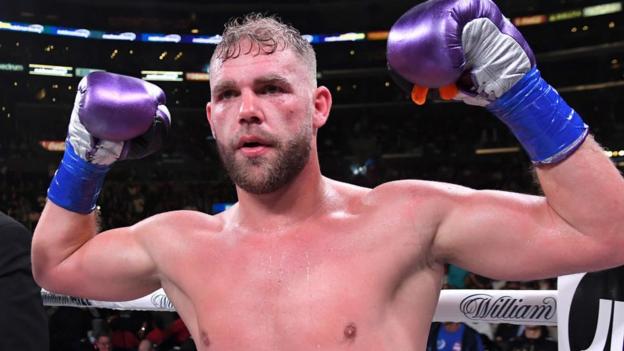 Billy Joe Saunders says he wants to fight Saul ‘Canelo’ Alvarez but admitted there was “something missing” as he laboured to a knockout win over Marcelo Esteban Coceres in Los Angeles.

Saunders, 30, floored Argentina’s Coceres three times in the 11th round, prompting a stoppage, to defend his WBO world super-middleweight title.

The Briton, on his US debut, conceded “it wasn’t a world class performance”.

“Canelo may look at that and think now is the time to get me,” said Saunders.

“I knocked him out when I knew I had to. I thought ‘you have to stop him’ and I stopped him.

“I knew I had to dig very deep. I am not one to make excuses. I came over here five days out, nine hours’ time difference, I haven’t slept right for five days.

“When someone is talking abut Canelo and you are fighting an Argentinean, you don’t look past him but one eye is off. I have to look at the performance. I was trying to get my feet working, it was like I was dipped in glue. There was something missing, maybe it was the travel, I don’t know.”

‘Canelo and rivals may fancy their chances’

Saunders’ win arrived on the undercard of KSI’s victory over YouTube rival Logan Paul, while elsewhere on the card American lightweight Devin Haney defended his WBC world title with a points win over Alfredo Santiago.

A solid left hook and right uppercut in the 11th round from Saunders floored his rival and helped secure a 29th win from as many contests as Coceres fell to defeat for the first time in a 30-fight career.

Promoter Eddie Hearn said he felt Saunders was at risk of defeat had he not found the knockout, adding: “He showed a lot of heart to come back from that as his tank was empty, he was flat.”

Elsewhere on Saturday, Bulgaria’s Kubrat Pulev fought for the first time since being suspended by the California State Athletic Commission for “forcefully” kissing a female reporter on the lips.

The 38-year-old landed a unanimous points win over American Rydell Booker and maintained his position as the IBF’s number-one challenger for the winner of champion Andy Ruiz Jr’s rematch with Anthony Joshua.