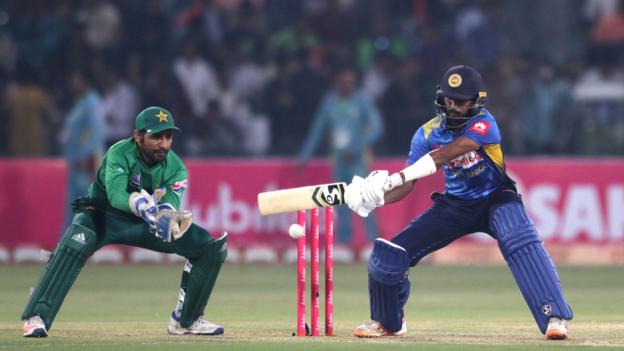 Pakistan will play a Test at home for the first time since 2009 after announcing a two-match series against Sri Lanka in December.

There has not been a Test in Pakistan since the Sri Lanka team bus was attacked in Lahore 10 years ago.

Six Pakistani policemen and two civilians were killed in the attack, while a number of the Sri Lanka team were wounded.

The two matches will form part of the World Test Championship.

The first Test will be in Rawalpindi from 11-15 December, while the second will be in Karachi from 19-23 December.

“This is fabulous news for Pakistan and its reputation of being as safe and secure as any other country in the world,” said Zakir Khan, the Pakistan Cricket Board’s director of international cricket.

“We are thankful to Sri Lanka Cricket (SLC) for agreeing to send their team for the longer version of the game, which will contribute significantly in the PCB’s efforts and drive for regular resumption of international cricket.”

Pakistan started playing the majority of their ‘home’ internationals in the United Arab Emirates after the 2009 attack.

In 2015, they hosted Zimbabwe in Pakistan and played three one-day internationals as well as two Twenty20 internationals in a series that was overshadowed by a suicide bombing outside the Lahore stadium.

Sri Lanka played three ODIs and three T20 matches there in September and October, although some of their main players chose not to take part.

“We are pleased to confirm our return visit to Pakistan as, based on our earlier visit, we are comfortable and convinced conditions are suitable and conducive for Test cricket,” said SLC chief executive Ashley de Silva.

I would definitely go back – Farbrace

Warwickshire sport director Paul Farbrace, the former Sri Lanka assistant coach, was on the team bus during the attack.

“I’ve spoken to quite a few players who have been back to Pakistan. I would definitely go back,” he told BBC Radio 5 Live.

“The thought of sport going back and cricket going back to Pakistan is vital for young kids growing up in that country.”

He added: “I don’t think any cricket board will force any player to go. Sri Lanka went there recently and not all of the main players went.

“It will take a little bit of time for teams to start to go to Pakistan. The players will do the selling; they will come back and say ‘it’s fantastic, you have to go there as there is no issue’.”