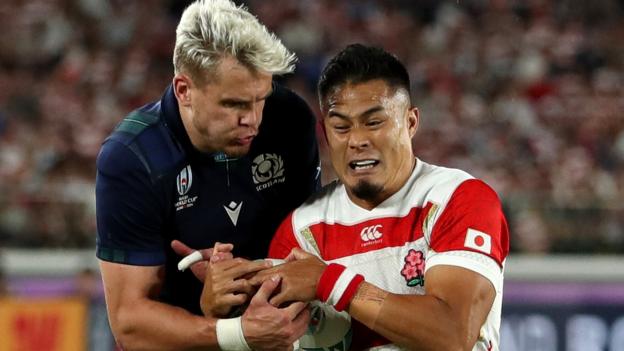 World Rugby says the Scottish Rugby Union has “expressed its regret” over conduct at the World Cup and will not contest a £70,000 fine.

The penalty came after criticism of the threatened cancellation of Scotland’s final pool game against Japan.

The match was in doubt because of the approaching Typhoon Hagibis, and SRU chief executive Mark Dodson complained of World Rugby’s “rigidity”.

Dodson hinted at legal action if the match did not go ahead.

An independent disputes committee later ruled he had “brought the game into disrepute” and imposed the fine.

A statement from World Rugby read: “(We) can confirm the Scottish Rugby Union has expressed its regret and has confirmed it will not challenge World Rugby further on this matter.

“The Scottish Rugby Union has agreed to pay a donation of £70,000 to World Rugby and the matter is now closed. There will be no further comment from either party.”

Cancelling the final pool game against the host nation would have eliminated Scotland and, after two matches scheduled for the previous day had been called off, World Rugby said it would make a decision on the day of the match about whether it could go ahead in Yokohama.

The game was played, but Scotland lost 28-21 and failed to reach the knockout stage.

At the time of the independent disputes committee initial ruling, Scottish Rugby responded by saying: “We will now reflect on this outcome and further consider all our options, which may include arbitration.”