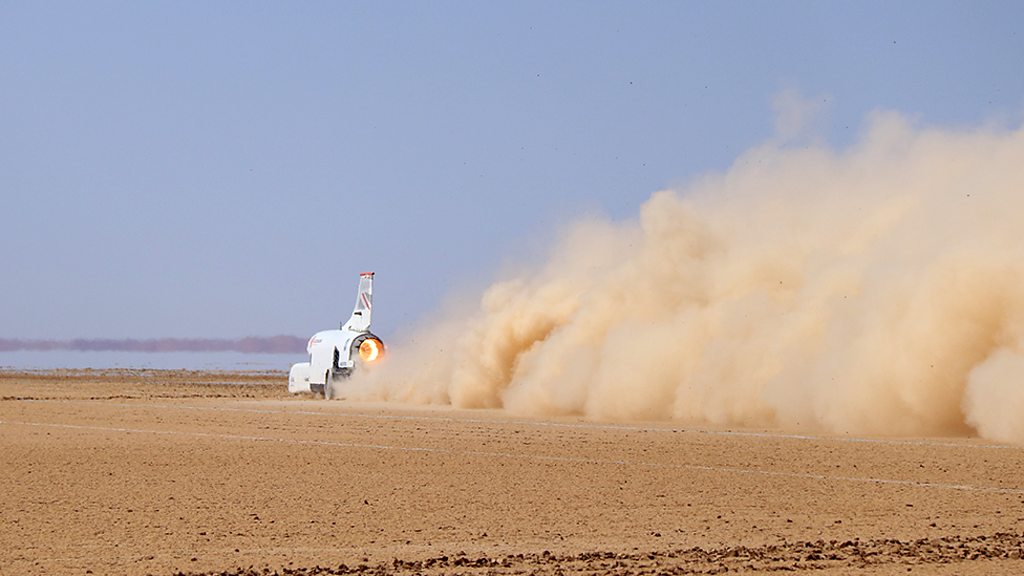 Bloodhound has now joined the exclusive club of land speed racers that have gone faster than 600mph (965km/h).

Only six vehicles in the history of the land speed record have previously driven beyond 600mph.

Bloodhound’s achievement is notable because it’s been running with only the thrust of a jet engine. The car’s design allows for a rocket motor, too.

When this is fitted next year, as planned, the arrow-shaped machine should be in a very strong position to smash the current world record of 763mph (1,228km/h).

This was set 22 years ago by another British car, Thrust SSC. The driver back then was the same as in Bloodhound today – RAF pilot Andy Green.

The new vehicle has been conducting its high speed trials in South Africa’s Northern Cape – on Hakskeen Pan, a wide and extremely flat section of desert.

As on previous fast runs, Saturday’s mark was set early in the morning. It’s the time of day when air temperatures are at their coolest, enabling Bloodhound’s Eurofighter jet to put down its thrust very rapidly.

To put the 628mph in some sort of context – that’s faster than an airliner would typically be cruising, and Bloodhound is doing it at ground level. And a fighter plane tearing down a runway would be airborne long before it approached this kind of speed.

The team says the 628mph speed concludes the high-speed trials and it will now return to England.

Whether Bloodhound can eclipse them all is going to depend in large part on financing.

The car’s costs are currently being underwritten by wealthy Yorkshire businessman Ian Warhurst. He says the next phase of the project will have to be funded by others, most likely corporate sponsors.

The Norwegian aerospace company Nammo is waiting and willing to put one of its rockets in Bloodhound, and the car will need the booster if it wants to challenge Thrust SSC.

“As you get faster, the main force you’re fighting against is the drag,” Nammo’s chief engineer Adrien Boiron told BBC News.

“The drag is proportional to the square of the speed, which means that it gets more and more of a problem. And the way for Bloodhound to get a lot faster than the previous car, which had two jet engines, is to put a rocket in it.”