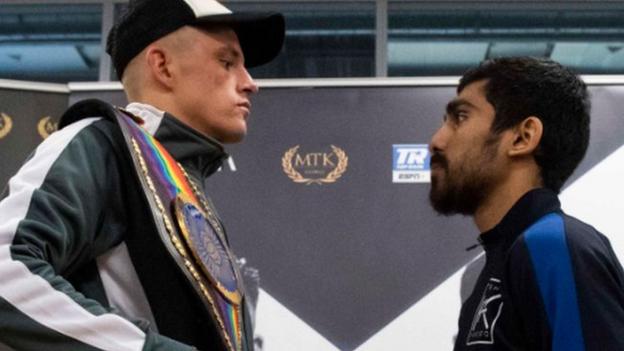 “There can only be one champion of Scotland,” says Kash Farooq as he prepares for Saturday’s bantamweight showdown with Lee McGregor.

The former amateur team-mates meet at Glasgow’s Emirates Arena, with Farooq’s British title and McGregor’s Commonwealth belt on the line.

“I believe I’m the best and he believes he’s the best, but on Saturday we’ll find out,” said Farooq.

“We’re the same weight and only a couple of months apart in terms of age, so both of us want to prove who is the best. Both of us are champions, but there can only be one champion of Scotland.

“It’s all about who wins on the night. I want the win. That’s all that matters to me.”

Glasgow-based 23-year-old Farooq knocked out Jamie Wilson after just 73 second in September 2018 in what was the first all-Scottish contest for British title in the weight division since 1993.

Since then, he has enjoyed three successful defences, taking his record to 13 wins, while Edinburgh’s 22-year-old McGregor has won all seven of his pro bouts.

McGregor is a former stable-mate of Josh Taylor and takes inspiration from the recently unified IBF and WBA super-lightweight champion.

“Josh is the exact person I look up to,” said McGregor. I was privileged to be his team-mate for my first year-and-a-half as a professional.

“I learned off him and my career has gone almost exactly the same as his did with winning the Commonwealth title early and moving on to bigger fights on TV.

“He had to rush it a bit. Whereas, with me, it’s a case of ‘what do we do?’ because I’m progressing so quickly but still so young. So it’s encouraging and thankfully I have the right people behind me.

“Josh is always on the other end of the phone if I ever need anything. I talk to him every day as a mate. So it’s good to have him, especially with how quickly his success has come.”